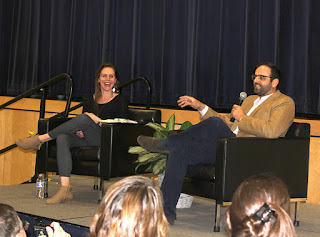 When Alon Shaya began to develop his first cookbook, he ran into a problem. How do you build a conventional cookbook with “gnocchi, kugel, pita and jambalaya?”

Each of those items represents a different part of the James Beard Award-winning New Orleans chef’s life, so he decided to use food as a way to tell his story. The result is “Shaya: An Odyssey of Food, My Journey Back to Israel,” which was released by Knopf this week.

The cookbook is structured in 26 biographical episodes, each with recipes tied to that phase of his life, or the memories described in the story.

He also has a section devoted to numerous hints and tips for home chefs, describing certain processes, or explaining the difference between the kosher salt most people use at home and the types used in many restaurants, and why that affects a recipe.

Shaya spoke about the book at the Uptown Jewish Community Center in New Orleans on March 14, interviewed onstage by Tina Antolini, who Shaya worked with in writing the book, and who founded the “Gravy” podcast for the Southern Foodways Alliance.

“I was a huge fan of her work with ‘Gravy’,” Shaya said, “and she is an amazing storyteller.”

Antolini said the book is filled with “really compelling personal stories that have food memories.”

Born in Bat Yam, Shaya “decided to move” to the United States at age four, two years after his father moved from Israel to Philadelphia. He, his mother and sister were suddenly in this strange land, not knowing the language and not quite fitting in.

A year later, they moved into a house — but he realized something was up when his father didn’t get in the car when they left the apartment.

In the single-parent household, Shaya had to take on responsibilities, and cooking was an area he was happy to do. His first time cooking solo was when he was nine and said he would use the oven to make hamantaschen. He related that his mother called every few minutes to make sure the house hadn’t burned down.

When he would come home from school and open the door to find the “aroma of peppers and eggplants roasting on an open flame,” it meant his grandparents were visiting from Israel, and “things would be normal for a little bit.” He would feign illness so he could skip school and cook with his grandmother.

By the time he was a teen, he was “selling drugs and stealing cars. I was definitely on the wrong side of the tracks, with people who were not good influences.” He was also a troublemaker at school, but teacher Donna Barnett, the home economics teacher, recognized he had a passion for cooking. Despite other teachers expressing alarm that she was letting Shaya be around knives, she became his mentor, “the one adult in my life I could really communicate with.”

Barnett helped find him a job at a restaurant, threatened to “kick my ass” if he was late, and helped him with the paperwork to get grants and scholarships to culinary school. “It was because of her I had a path out of this life.”

Shaya discovered that food was “more than something to do for fun or do at home.” Culinary school broadened his horizons, and he won the wine award for his class. “My wine experience before culinary school was Mad Dog 20/20.” 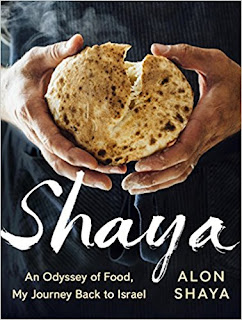 His journey would take him to Las Vegas for a while, then to New Orleans. At age 10, he would watch Emeril Lagasse and Paul Prudhomme on television. “I was very intrigued,” and their cuisine “kind of felt like another country.”

His mother took him to a culinary book fair where Lagasse was doing a cooking demonstration for a crowd of about 300. Shaya was on the front row as Lagasse made shrimp beignets. “He came off the stage and handed me one, and that was the only one he gave away,” Shaya said.

So when Shaya had an opportunity in 2003 to go to New Orleans, “I jumped on it, and after I came here I never wanted to leave.”

The book, naturally, tells his Katrina story, “The Lost Crab Cakes of Katrina.” The storm hit on Monday and he returned that Wednesday. He wandered through what was left of the looted-out Wal-Mart on Tchoupitoulas, “grabbing red beans, rice, Tabasco… whatever I could think to taste good,” especially since there were no vegetables or meats.

He set up a propane cooker in the parking lot and started serving “really bad” red beans and rice. But people were in tears from the “moment of connection,” and it reminded the young chef what food really means, rather than his previous attitude of wanting to be the one who invents something that would be the next great culinary staple.

Helping people through food was part of the inspiration to go to Italy and learn to become an Italian chef, as that looked like a good way to have a culinary career. “I never thought people would want to eat hummus and borekas,” he said. “I did everything I could to become Italian.”

Returning to New Orleans, he and his partners opened Domenica, which immediately grew acclaim, then a more casual Pizza Domenica.

In 2011, he went on a culinary exchange to Israel, coordinated by the Jewish Federation of Greater New Orleans. The four chefs’ experiences centered on Partnership2Gether community Rosh Ha’Ayin, but included tours to markets, wineries, celebrated restaurants and an early-morning meal preparation for 300 soldiers on the Golan Heights.

That trip “was a huge turning point for me as a chef, and as someone that was still searching for my identity as a chef.”

It was also “was a huge moment for me, mostly because I proposed to my wife, and she said yes.”

The sights and sounds brought him back to his origins. “I knew Israeli food before I knew Italian food, Southern food,” he said. “This is part of who I am. Why have I been pushing it away for so long?”

He started introducing Israeli twists into the menu at Domenica — cautiously, so as not to tamper too much with their success.

Before Israel took over Italy, at least in Domenica, he decided it was time to open an Israeli restaurant, though his original plan was on a smaller scale. In 2015, Shaya opened and was an immediate success, winning the 2016 James Beard Award for Best New Restaurant in the country.

The cookbook ends with the opening of Shaya, and the story comes full circle with his mother and father visiting the restaurant.

“The book ends with Shaya but it doesn’t end my story,” Shaya said, as recent events separated Shaya the chef from Shaya the restaurant, which like the Domenica locations was part of the John Besh Restaurant Group.

Last September, Shaya was fired from the three restaurants after he spoke with a Times-Picayune reporter who was working on a story about 25 former Besh Restaurant Group employees who were alleging a culture of sexual harassment. Shaya said he was fired for speaking out.

In October, the story was published and Besh stepped down two days later. By then, Shaya had formed Pomegranate Hospitality and attracted much of the talent from Shaya Restaurant.

“I don’t look back on what happened with much regret,” he said. “I saw it as the clouds kind of parting” and giving him the chance to have a new “clarity” of purpose.

He said few people get the opportunity to step back and reflect, reexamine things, learn from mistakes and build anew. The six months gave him and the staff at Pomegranate “time to really develop the culture to build a great company that will put the team first.”

Zach Engel, who was chef de cuisine at Shaya Restaurant, will be the culinary director of the two restaurants. In 2017, he was named Rising Star Chef at the James Beard Awards.

Saba will take over the space on Magazine Street where Kenton’s is. Kenton’s will close on March 18, and the plans are to open Saba by mid- to late April. Of course, they are going to have to build their signature wood-fired oven for making pita.