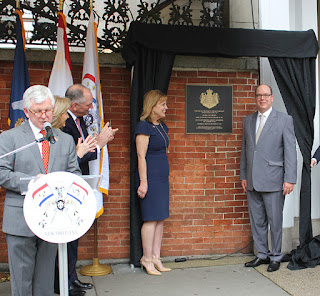 New Orleans is known for its Mardi Gras royalty, but there is one example of actual royalty from New Orleans, and she was Jewish.

On March 18, His Serene Highness Prince Albert II of Monaco was in the French Quarter to kick off the New Orleans tricentennial celebrations by dedicating a plaque at the birthplace of Marie Alice Heine, who became known as Princess Alice when she married Prince Albert of Monaco in 1889.

“You can be proud, as we are in Monaco, of this child of New Orleans,” he said.

Albert II is the great-great-grandson of Prince Albert, tracing his lineage through Albert’s first wife. He said Princess Alice “was a very unique personality,” adding “she was also quite a leading figure in the principality’s history, promoting its culture and lending her name to two of my great-great-grandfather’s scientific research vessels.”

The home at 900 Royal Street belonged to Alice’s mother’s family, the Miltenbergers. She was born there on Feb. 10, 1857, to Michel and Amelie Miltenberger Heine.

Michel, who was Jewish, had moved to New Orleans from Germany in 1837, with his older brother. Their uncle in Berlin financed a banking and commission house, A&M Heine, at Common and Carondolet.

Their business was successful and in 1853 he was able to marry Amelie Miltenberger, daughter of a wealthy first-generation French-American and a Creole woman. Amelie’s grandmother had built the three interconnected homes on Royal Street for her three sons.

The Heines would alternate between New Orleans and Paris, where they opened another branch of A&M Heine, becoming important figures in financing France’s war on Prussia in 1870. Napoleon III and Empress Eugenie became godparents to Alice, and when the Civil War broke out in the States, the Heines remained permanently in Europe.

They were also cousins with the poet Heinrich Heine.

In her book, “The Grimaldis of Monaco,” Anne Edwards said Alice “spoke many languages — all fluently and all with a melodic American Southern accent.”

In 1875, she married Armand Chapelle, the 7th Duc de Ricelieu and Marquis de Jumilhac, and converted to Catholicism after being raised Jewish. They had a son, who became the 8th and final duke.

While vacationing on the island of Madeira in the winter of 1879, Alice met Prince Albert I, who was in the process of being divorced. Regarding Madeira, he later wrote “it was there that my destiny was forever changed… I met Alice, Duchess of Richelieu, and soon thereafter we began the affectionate courtship that led to our marriage.”

Albert II said “there was no question of the relationship between Alice and Albert,” and in 1880 two things happened that enabled their relationship to move forward — the duke died, leaving Alice a 22-year-old widow with two children, and the pope annulled Albert I’s marriage.

Albert II noted that Prince Charles III, Albert I’s father, was not enthused by his son’s new relationship, and “imposed conditions that were tantamount to a refusal.”

Charles III died in September 1889, then Albert I and Alice wed on Oct. 30, “a true marriage of love,” Albert II said.

Well-acquainted with the greatest artists, intellectuals and musicians of Europe, Alice helped develop Monaco into a “cultural hotspot.”

But she never understood her husband’s affinity for the sea, and though two of his research vessels were named in her honor, she did not like his being away for long periods of time. They separated in 1902 but never divorced.

The separation apparently came after a confrontation at the opera, where the prince accused her of having an affair with composer Isidore de Lara — who was born Isidore Cohen to a family of British Sephardic Jews — and slapped her.

Albert II noted that many discoveries came about through work on the vessels named after Princess Alice, including the identification of anaphylaxis, and meteorological work “that became a milestone of climate studies of the time.” Today, Albert II speaks out regarding climate change.

Alice resettled in London, where she was a close friend of Queen Alexandra, and supported numerous young, promising artists. Never remarrying, she died in 1925 and is buried in Paris.

Cheryl Landrieu, filling in for her husband, Mayor Mitch Landrieu, said “When we heard of the personal connection through Princess Alice, we knew we needed to recognize this unique part of New Orleans history.”

Landrieu added that the plaque, which was a gift of the Monegasque Consulate, “will serve as a symbol of the enduring ties between New Orleans and Monaco for many centuries to come.”

Maccario Doyle had been in New Orleans in February for a week-long celebration, “Monaco Takes New Orleans.”