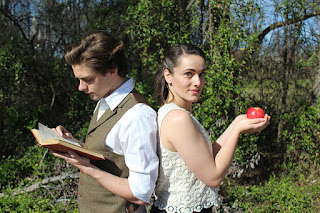 Robert Atwell and Rachel Glazer as Adam and Eve

The historic Temple B’nai Israel in Natchez will be the scene for Twain’s “The Diaries of Adam and Eve,” with two performances the weekend of April 28. The production is presented by the Jackson-based Goldring/Woldenberg Institute of Southern Jewish Life.

Nora Katz, director of heritage and interpretation for the Institute, said “it’s a really fun text,” based on two Twain novellas, “Adam’s Diary,” published in 1904, and “Eve’s Diary,” from 1906. The 90-minute show is done from the first-person accounts of Adam and Eve.

The irreverent work will “showcase the temple as a potential performance space” for concerts, readings and theatrical productions, Katz said, as they work on raising funds for restoration of the building.

“It’s thrilling to get to work on such a little-known play,” Glazer said. “We’re exploring this world that we all feel like we know, but with Mark Twain’s words and storytelling, it’s a totally different version from anything we’ve seen before.”

“We’re excited to perform in this historic environment,” added Atwell. “It adds such a unique dimension to the audience and actor experience.”

In 1991, the remaining members of B’nai Israel entered into a partnership with the Institute, then known as the Museum of the Southern Jewish Experience, to preserve the historic 1905 building.

In 2017, the Mississippi Heritage Trust named B’nai Israel one of the Ten Most Endangered Historic Places in Mississippi.

The Natchez Jewish community and the Institute are embarking on a renovation project that will bring the building into adherence to the Americans with Disabilities Act, restore the historic structure and preserve the building in perpetuity.

Once the multimillion-dollar restoration project is complete, the building will be open as an event space, community arts hub, and museum telling the story of Jewish life in Natchez.

Proceeds from the performances will go toward the B’nai Israel Restoration and Preservation Fund. The project is sponsored in part by the Natchez Convention Promotion Commission and Visit Natchez, with additional support from Atmos Energy, the Historic Natchez Foundation, and community members Stratton Bull and Neal Nathanson.

Some preservation work is already underway, as Katz said they hope to have an access ramp done this summer. “It’s not a wheelchair-accessible building,” she noted.

The production will also feature the unveiling of a statue of Twain that has been donated to the Historic Natchez Foundation by Manhattan-based StudioEIS, which created the sculpture of Twain that was unveiled in Liberty, Mo., in 2015.

Twain referred to Natchez as “the last of the beautiful hill-cities” along the Mississippi River.

Performances are April 28 at 7 p.m. and April 29 at 2 p.m. Tickets are $15, $10 for students, seniors and groups of 10 or more. Tickets are available online at Brown Paper Tickets, or in person at the Natchez Visitor Center.