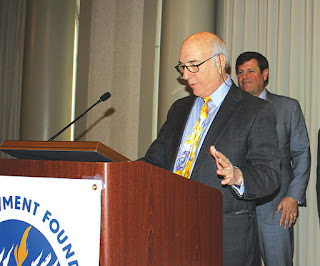 With Alan Franco behind him, Macy Hart reads the Tzedakah Award that was presented to the Goldring Family Foundation

“Create a Jewish Legacy,” the projected image said at the Jewish Endowment Foundation of Louisiana’s Annual Event on March 11 at the Westin Canal Place in New Orleans. “Secure a Jewish Future,” it concluded.

That was certainly the theme of the day as the honorees were recognized for their roles in providing Jewish summer camping experiences and leadership training for the next generation.

Andrea Lestelle, JEF president, noted that “all of our honorees have given of their time, wisdom and talent, along with their dollars.”

She noted that last year, donors contributed $7.9 million to their funds, and “out of these funds, we distributed $4.5 million to 537 unique charities.”

The Tzedakah Award was presented to the Goldring Family Foundation, with the presentation focusing on the family’s role in funding the Goldring Jewish Summer Camp Experience.

The program was established by JEF in 1999, providing a grant to any Jewish child in Louisiana, Alabama, Mississippi or the Florida panhandle for their first summer at a Jewish non-profit sleepaway camp. In 2001, the Goldring Family Foundation began funding the initiative, which now provides a grant of up to $1,500, and the grants are not needs-based.

Around 1400 children have benefited from the program since its inception.

In a video presentation where the Goldring family’s legacy in New Orleans was compared to that of Judah Touro, the Delgadoes and Sterns, campers including Ellie Zurik, Rebecca Rubin, Charlie Cox and Emily Kupperman spoke about their summer camp experiences.

Scott Cowen, president emeritus of Tulane University, also spoke about the family’s impact on Tulane. “We wouldn’t be the institution we are without the Goldring Family Foundation and Bill (Goldring)’s involvement,” he said. They “are a true cornerstone of Tulane University and the New Orleans Jewish community.”

The presentation to the Goldring Family Foundation was made by the region’s most recognized Jewish camping professional, Macy Hart, who headed the Henry S. Jacobs Camp in Mississippi from 1970 until stepping down in 1999 to establish the Goldring/Woldenberg Institute of Southern Jewish Life in Jackson. He retired from ISJL earlier this year.

Hart mentioned that Bill Goldring’s daughter, Diane, was a counselor for what is now Camp Dream Street, a SOFTY intitative that continues at Jacobs Camp, and that was how he got to know the Goldring family. Also, Hart spoke of how Alan Franco, Diane’s husband, was a Jacobs camper in the 1970s.

Hart said the “embrace of Jacobs Camp by the Goldring family has been tremendous.”

He also spoke of the Goldrings’ support for ISJL, when the family “decided to invest in something that was only theory.” As an example of the Institute’s effect regionally, Hart mentioned that there are 4,100 children currently served by the Institute’s education department, in 71 congregations in the 13-state region.

He said the Goldrings “find a way to make their resources work for the good” and their desire to improve the community is something “we should cherish every single day.”

In accepting the award for the family, Alan Franco said “I would not be here today if it were not for Jewish summer camp.” He explained that he was the only Jewish student in his class at St. Paul’s Episcopal in Mobile, and Jewish summer camp “gave us the opportunity to have a Jewish life” unlike what they experienced during the school year.

Joan Brooks Cox received the Jewish Federations of North America Endowment Achievement Award. The senior financial advisor at Personal Financial Advisors, Cox has been in the financial services industry in 1984.

Being involved in the community has been instilled to her from her parents “as long as I remember,” and when she moved to New Orleans “it was a way of getting to know people.”

Serving on the board of Touro Synagogue “was great training ground” as she would help establish the Northshore Jewish Congregation, serving as its first president.

Working with JEF has “allowed me to have much deeper conversations with my clients on estate planning.”

She has worked with several Louisiana congregations on setting up endowment funds, and as her parents “felt strongly” about Henry S. Jacobs Camp, she helped them create the RoseMary and Saul Brooks Designated Fund at JEF for Jewish camp scholarships.

Now, both their children work in the non-profit world.

The Young Family Award for Professional Excellence was presented to Morton Katz, who was senior partner at Herman, Herman & Katz until 2011.

Katz is a past president of the Jewish Federation of Greater New Orleans and the Jewish Community Center. He currently serves as vice president of JEF and chairs the professional advisory committee.

When Katz was president of the Federation, the idea was floated to endow what had been the Lemann-Stern Leadership Development Program, which was established in 1960. Katz called the program “probably the best organization under the Federation umbrella. What could be better than training our young people to become leaders?”

When he and wife Carole decided they wanted to make that a reality, he approached his brother-in-law, Stuart Phillips, to join in the effort, and that is how the program is now known as the Katz-Phillips Leadership Development Program.

A major proponent of Create a Jewish Legacy, Katz said “you’re here on the Earth for a limited time. You can only take one thing with you, and that’s your reputation.”