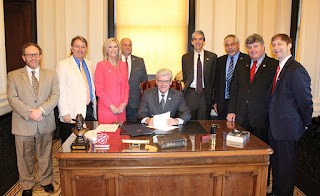 On March 27, Mississippi Governor Phil Bryant signed a law allowing the state to invest a maximum of $20 million in Israel Bonds. The bill takes effect on July 1.

The bill authorizes “a portion” of excess state funds to be invested in bonds “issued, assumed or guaranteed by the State of Israel” provided that they have a credit rating of AAA and have a higher rate of return than U.S. bonds. House Bill 747, introduced by Rep. Hank Zuber of Ocean Springs, passed 113-2 on Jan. 31 and was sent to the Senate.

A similar bill, SB-2051, had been introduced in the Senate by Joey Fillingane of Sumrall. It was passed on Feb. 8 with an amendment that the investment be denominated in dollars, which Israel Bonds are. Another change capped the investment at no more than $20 million.

On March 2, it was returned to the Senate for concurrence. The House amendments passed the Senate, 42-10, on March 15.

It was originally hoped that the bill could be signed during the week of March 12, when Israel Consul General Lior Haiat was in Mississippi for a homeland security conference and meetings in several communities.