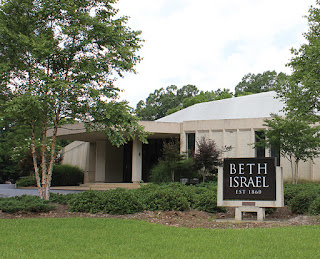 As part of the festivities for this year’s Rabbi Perry Nussbaum Civil Justice Lecture, a Mississippi Freedom Trail marker was dedicated at Jackson’s Beth Israel Congregation on April 13.

The marker, “Bombings in the Jewish Community,” describes three Klan bombings and a fourth attempted bombing in Jackson and Meridian in 1967 and 1968.

Lucy Allen, director of museums at the Mississippi Department of Archives and History, was the Nussbaum honoree and presented this year’s Civil Justice Lecture on April 13 at the Millsaps College Gertrude Ford Academic Center. There was also an awards dinner on April 12 at the Civil Rights Museum.

The Nussbaum Lecture Series is an annual event at Millsaps. In 2008, John D. Bower, renal pioneer and friend of the late rabbi, endowed the lecture series, which is dedicated to men and women who have stood against racial bigotry and religious prejudice.

Nussbaum served the Jackson congregation from 1954 until his retirement in 1973. As large numbers of Jewish activists came to Mississippi with the 1961 Freedom Rides and were arrested, Nussbaum quietly made the long trek to Parchman Prison, leading services and serving as a source of information for their concerned family members.

He continued his civil rights activism, helping found an interracial group of ministers to rebuild bombed churches. When the new Beth Israel building was dedicated in 1967, black and white ministers participated.

A Klan cell had decided that the problems Mississippi had faced in the 1960s stemmed not from the blacks, but from the Jews, and embarked on a bombing campaign. On Sept. 18, 1967, a bomb went off at Beth Israel, heavily damaging the administrative offices.

On Nov. 23, a bomb went off at Nussbaum’s home; he and his wife escaped injury.

On May 28, 1968, the four-year-old Beth Israel building in Meridian was bombed, with the blast damaging the education building.

Backed by the Mississippi Jewish community, the Federal Bureau of Investigation paid two Klan informants for information and set up a trap for the bombers, using the home of Meyer Davidson in Meridian as bait. Fifteen police officers were waiting when Klansman Tommy Tarrants arrived on June 30 to plant 29 sticks of dynamite.

When they ordered Tarrants to stop, he fled to his car and sped off, leading to a chase and gun battle. Tarrants was severely wounded; his accomplice, elementary school teacher Kathy Ainsworth, was dead in the car.

Tarrants was convicted and sent to Parchman, but after several years had a religious conversion, leading some in the Jewish community to press for his release. In 1976, he was permitted to do a work-release program and enroll at the University of Mississippi, and in 1979 wrote “Conversion of a Klansman.”

Tarrants would go on to lead an interracial church in the Washington area, then become president of the C.S. Lewis Institute. He also co-wrote “He’s My Brother” with civil rights activist John Perkins.

The Mississippi Freedom Trail was started in 2011, similar to the Blues Trail of historic music sites throughout the state, to mark the 50th anniversary of the Freedom Rides.

Stuart Rockoff, who has been involved in the Beth Israel marker, said Temple members raised the funds to have the marker made. One side resembles a typical historical marker, while the second side contains an applique with photos and more in-depth information on the bombings.

It was hoped that the marker might be ready in time for last fall’s 50th anniversary of the Beth Israel bombing, but having it dedicated as part of the Nussbaum Lecture is appropriate, Rockoff said, because Nussbaum was central to the story.

At the dedication, Beth Israel President Susan Fijman spoke about Nussbaum, while Leslie McLemore, who became active in the civil rights movement in 1960 while a student at Rust College, spoke of the event’s significance and Beth Israel’s role in bringing the black and white communities together in the late 1960s.

“The bombing of the Beth Israel Congregation ushered in a level of bi-racial cooperation and understanding that had not been present in the community before 1967,” he said.

McLemore, who chairs the Freedom Trail Task Force, was president of the Jackson City Council and in 2009 served briefly as interim mayor, unveiled the marker.

“The leadership and people of Beth Israel Congregation provided a beacon of hope during a difficult chapter in our history,” says Visit Mississippi Director Craig Ray. “The Mississippi Freedom Trail gives visitors a way to discover these stories and explore the state.”