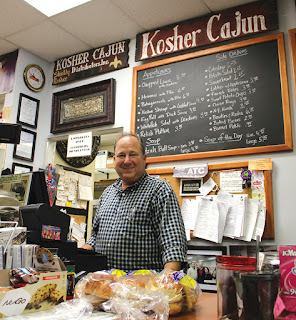 Thirty years ago, the primary source of kosher products for numerous communities in the region began with a pizza party.

Kosher Cajun New York Deli and Grocery in Metairie is celebrating its 30th anniversary this year. When Joel Brown started a small kosher products supply business, “there was not much available in New Orleans at all.”

Brown grew up in a kosher Conservative home in New Orleans. He attended Lakeshore Hebrew Day School, and when he was 12 the family decided to become a bit more traditional.

“My father was a foodie and had built a beautiful kitchen,” Brown said.

By the time he was 19, Brown dabbled some in the food business, knowing the importance of kashrut but “not knowing what I wanted to do.”

He visited an aunt in Philadelphia, brought back “a bunch of kosher pizzas and had a bunch of friends over.” The overwhelming question among his friends was “how can we get some of them.”

At that moment, “a light bulb went off,” so he found a kosher pizzeria in Miami and called them with an order for 150 pizzas. “They hung up on me,” Brown said, thinking it was a practical joke.

After some convincing that he was for real, a supply of pizzas arrived via Delta Air Freight. By the time they arrived, he had pre-sold every pizza. The idea of providing kosher items to the New Orleans community was planted.

He then traveled to the first kosher food show in Miami, “made some contacts with different vendors and saw what was available.”

He started small, storing items in his mother’s chest freezers. After about six months, he started contemplating a retail launch “on the side,” as he was working in food services at a hospital.

A friend had space available in a building he owned, so Brown got the electricity hooked up, “got cold feet and turned it off.”

A few weeks later, he turned the electricity back on and gave it a try.

Not wanting to go to the bank, he started small, “made some money and bought another piece of equipment.” It was a slow method, but “the business never owed anybody any money.”

The store was part-time “for a year or so.” As the business grew, he took a wall out in the building and expanded, then was asked when he would start serving food. He got a deli slicer, a deli counter and a few tables, “slowly building the business.”

Around then, he met and started dating Natalie, who would become his wife. She was interested in helping build the business “and we really worked side by side all the way through,” until she died from breast cancer in 2011.

The hours were long but “we had a special bond… we were able to work together every day.”

They had three daughters who “grew up at the store,” and “all the customers were able to see them grow up.” For the girls “it was almost like having many extra sets of aunts and uncles.”

They started mainly serving sandwiches as a kosher deli, “something New Orleans hadn’t seen in 50 years or so.”

But he knew that he wasn’t going to keep the doors open just by appealing to those who keep kosher. “We had to be able to attract the non-Jews, the non-kosher Jews and whoever would like good New York deli.”

As the grocery business expanded, so did the deli, and space “started to get really tight” in the building on North Hullen. In 1999, he bought the property on the Severn Street side and started a major expansion. When it opened in 2000, there was an additional 5,000 square feet, with groceries on the North Hullen side, a new large kitchen, expanded dining area that can seat 80, a kosher wine section with 150 varieties from around the world and a Judaica shop.

Brown refers to it as “one-stop shopping” and “the Jewish welcome center, where people come and meet, see old friends.”

It’s also the Jewish New Orleans welcome center. As New Orleans continued to grow as a major convention city, the number of visitors who keep kosher has continued to expand. Now, “it is every day” that Kosher Cajun is called upon to serve out-of-towners.

Early on, the visitors said they would love to have some New Orleans dishes. Though Kosher Cajun was a New York style deli, “we wanted to stand up to our name and offer real New Orleans kosher specialties, like kosher fried ‘shrimp,’ jambalaya, chicken and sausage okra gumbo, red beans and rice.” They also do kosher pareve king cakes.

New Orleans is “the mecca of food with amazing restaurants,” Brown said, but kosher visitors hadn’t been able to take advantage of that. When a meeting or event is held at a restaurant, those who keep kosher could feel left out.

Enter Kosher Cajun. They provide double-wrapped meals that can be heated in a non-kosher oven at any restaurant or hotel, and the meals are served on real china with real flatware, not plastic.

“We’ll bring one meal, we’ll bring 100 meals,” Brown said, noting the meals have been served at “all the fine restaurants,” the National World War II Museum, Mardi Gras World, the Superdome, the Convention Center. As the china does not come back into the store after being used at the non-kosher venue, “we buy china by the pallet.” A typical week could see 1,000 such meals prepared.

With New Orleans serving as a major cruise ship terminal, Kosher Cajun has worked with the cruise lines to serve kosher passengers.

But Kosher Cajun isn’t just serving kosher consumers — they do Halal meals, gluten-free, vegetarian and vegan. Brown explained that when big caterers are serving 1,000 people, they don’t want to have to bother with the specialty meals, so they call Kosher Cajun.

Kosher Cajun also serves as a kosher resource for the region. Packages can be sent same-day by Greyhound bus to locations in Alabama, Mississippi, Louisiana, “all the way to Pensacola.” Those further out can order for FedEx shipping, and he has filled orders as far as Hawaii.

Recently, he has coordinated with Chabad in Baton Rouge to set up regular pop-up shops, and works with communities in Mississippi. “I know what it was like way back when” before there was much kosher food available in New Orleans, “and I want to help these small communities.”

Even in Memphis, which has a decent kosher selection and a large Orthodox community, “they are always looking for more variety,” so he heads there with a refrigerated truck.

Kosher Cajun also serves as a kosher product distributor for mainstream grocery stores in the area who want to expand their ethnic offerings, and supplies products to a halal establishment.

They also provide catering for kosher events, including platters of latkes for community Chanukah celebrations, and catered the Seder for Chabad of the Emerald Coast in Destin.

When it was time for the ships to head out for Israel, they had to provide enough food for the three-week trip. When they pulled up, carrying the huge order and Israeli items “that they longed for,” it was like seeing kids chase an ice cream truck, he said. He got a tour of the ships, and insignia from the uniforms hangs in the store.

Kosher Cajun’s vital role in the community was underscored after the levees broke following Hurricane Katrina.

Ten days after the storm and being in Memphis wondering if there would be anything to come back to, he made the trip to Metairie “to see the state of our home and our business.”

There had been four inches of water in the store, but the lack of electricity and the heat meant Brown was greeted with an overpowering stench from rotting meat and chicken, and black mold on the walls.

He would get calls from people who would say “we can’t move back to the city until you reopen. We need kosher food… it really gave me an urgency and a sense of commitment.”

He hired a crew to clean out the store while commuting back and forth to Memphis. “Within three months, we were open,” he said. There were only three of them working, compared to the usual 10, “but we were doing business. People were so thankful and gracious.”

It wasn’t just the locals — Jewish groups from around the country flocked to New Orleans to help rebuild the city, and they needed kosher meals.

Brown would tell the students to go back “and tell your parents New Orleans is a great place to visit, and they do.”

Brown said there are still schools that send groups to New Orleans as “a regular part of their curriculum” to learn about the storm and its aftermath.

He is thankful that the Jewish community has exceeded its pre-Katrina population and continues to grow, with “singles and young couples moving to town.”

To help the community rebuild, numerous national Jewish organizations held conventions in New Orleans. In 2010, the General Assembly of the Jewish Federations of North America was in New Orleans, “probably the biggest thing we’d ever done,” with thousands of delegates. They set up a restaurant and grocery area at the Sheraton Hotel for the gathering. “We were mobbed.”

During the GA, they catered for the 150 people on Prime Minister Benjamin Netanyahu’s plane, with “Israeli Secret Service watching every move we made.”

Large challenges like the Sa’ar-5 supplies and the GA “have fueled our expansion,” Brown said. “We rise to the occasion.”

More recently, Kosher Cajun has added sushi and fried chicken on Fridays, rotisserie chickens and challah for Shabbat. Every year they go to Kosherfest in New Jersey, the largest kosher trade show in the world. “We want new, innovative products all the time.”

But the biggest benefit, Brown said, is community. Those visiting from elsewhere start off by asking him to tell them about the New Orleans Jewish community. Visitors will often bring regards from someone else who visited one year or 10 years earlier. Through this, Brown has become an expert in Jewish geography.

Meeting new people is a “fringe benefit of loving what I do every day. It’s a business, it’s a pleasure, it’s a religious aspect, bringing kosher food to the community.”