Ala. PSC candidate says posts seen as anti-Semitic taken out of context 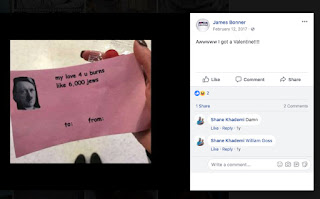 A candidate for Alabama Public Service Commission is under fire for Facebook posts that are being seen as racist and anti-Semitic, but James Bonner told Southern Jewish Life that the posts in question were “intentionally cut, cropped and picked apart to paint me as one of the ‘bad Republicans’.”

On May 21, the Alabama Political Reporter ran a piece under the headline “Mistaken identity and racist, sexist, anti-Semitic posts could spell disaster in PSC race.”

Bonner, who lives in Bear Creek, is facing incumbent Jeremy Oden for Position 1 on the PSC.

Among the posts cited in the piece is a photo of a pink piece of paper with a photo of Hitler and the phrase “my love 4 u burns like 6,000 jews,” with a comment from Bonner saying “Awwww I got a Valentine!!!” The image was posted on Feb. 12, 2017.

Other posts include Confederate imagery, occasional racially-charged images, comments on enjoying “fried anus” in the context of a Chinese restaurant’s menu, and memes taking the media to task for withholding judgment on motive when an attack is done by someone with a Muslim name.

A “profile picture” posted on July 4, 2015, depicts Hitler in a pink uniform with a large pink heart where the swastika would normally be on the armband. 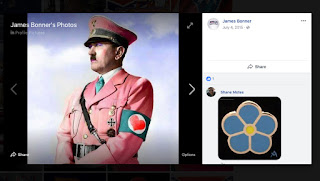 Christine Bailey, Bonner’s director of campaign finance and communications, said there will often be lengthy discussions on his Facebook page, and in the midst of the discussions he or someone else will post a joke about the topic.

Like so many other posts, she said, the valentine was meant as a joke and was part of a much larger discussion. In this case, the joke was that the valentine was from Wehrner Von Braun to Hitler, and it was a “follow-up to a thread” that discussed how Von Braun is so well regarded for his contributions to the U.S. space program despite having been a Nazi. The image, though, does not reference Von Braun.

“This post, out of context, can be made to seem much more damning than it was in its original presentation,” Bonner said.

He added, “I’m not a racist, sexist, anti-Semitic, bigot. I’m just a wry man with a dry sense of humor who shares articles, memes, and jokes that are meant to encourage debate and discussion. These posts are not driven by hate but by free speech” and he isn’t going to censor content on his page.

Joyce Spielberger, interim executive director of the Birmingham Holocaust Education Center, said “Never should the extermination of 6 million Jews as well as five million others deemed ‘undesirable’ be used in consideration of a joke. This kind of speech from someone in the public arena, is never acceptable in any ‘context’.“

Bailey said Bonner tries to promote discussion and intellectual debate on his site, but “it doesn’t always go that way.”

Bonner’s Facebook page has numerous posts every day on a wide range of topics. Among recent posts, Bonner mentioned the U.S. move of its Israeli embassy to Jerusalem, saying “Jereuslem (sic) will be the official capitol of Israel until Jesus comes again” and posted a Brietbart piece criticizing Democrats for not having a single representative at the embassy dedication.

According to the Alabama Political Reporter, despite having no campaign funding, Bonner is leading in the race because of confusion in certain parts of the state over who he actually is. In Mobile, Jo Bonner served as U.S. Representative for a decade, and in the Birmingham and Tuscaloosa areas he is mistakenly being associated with former University of Alabama Chancellor Judy Bonner.

The Reporter quotes Brent Buchanan, president of the Alabama political polling firm Cygnal, as saying the confusion has Bonner outpolling Oden by a 4-to-1 margin in the Mobile area.

(Updated May 24 at 2 p.m. to include reaction from Joyce Spielberger of the Birmingham Holocaust Education Center)