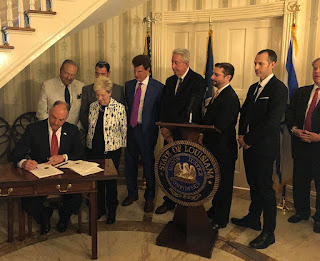 The State of Louisiana celebrated Israel’s 70th birthday on May 22 with a series of events at the State Capitol in Baton Rouge, culminating in an executive order by Governor John Bel Edwards that forbids state agencies from doing business with companies that participate in boycotts of Israel.

With the order, Louisiana becomes the 25th state to take an official stance against the Boycott, Divest and Sanction movement that seeks to isolate Israel.

“The United States, and by affiliation Louisiana, have benefited in innumerable ways from our deep friendship with Israel,” Edwards said in a statement about the order. “Any effort to boycott Israel is an affront to this longstanding relationship. I am pleased that Louisiana will join what is now a critical mass of states in supporting our closest ally.”

The Senate bill, introduced by Sen. Neil Riser, “commends and congratulates the modern state of Israel on the occasion of the 70th anniversary of its establishment.”

The House bill was introduced by Rep. Valarie Hodges, and “congratulates Israel on its seventieth anniversary, recognizes its contributions to humankind, expresses support for its people, and extends best wishes for a peaceful future.”

Last year, Hodges tried to pass a bill that would have prevented state public worker benefit plans from investing in companies that boycott Israel, but the measure failed.

A dinner was then held at the Governor’s Mansion with about 100 community members in attendance. It was the first-ever fully kosher meal at the mansion, catered by Rabbi Peretz and Mushka Kazen of Chabad of Baton Rouge.

After the dinner, Katz thanked the legislators and the governor. “Your symbolic contribution toward my state and the people of Israel are not taken for granted,” he said.

Katz assumed his post in Houston in August. He said the day’s events were “one of my peak moments I have experienced” as consul general and it was a day to remember.

He spoke of the commonalities and differences between Israel and Louisiana, noting that Louisiana is seven times the size of Israel. “We have the same issues that challenge our people. First of all, water. You have too much, we have too little.”

He also described the people of Louisiana as “Warm-hearted, friendly, caring. In short, Israelis.”

Because of that, “the State of Louisiana unequivocally rejects the BDS campaign and stands firmly with Israel.”

The order says the state commissioner of administration, Jay Dardenne, will terminate existing state contracts with a business that boycotts Israel or supports businesses that do so, and future contracts will include a certification that a company is not boycotting Israel.

It can be waived if the commissioner determines “that compliance is not practicable or in the best interests of the State.”

The order applies only to commercial conduct and does not affect speech or consumer conduct. It also will not apply to procurement contracts for less than $100,000, or vendors with fewer than five employees.

“It was truly a historic day for Louisiana and for the Jewish communities of this state,” said Arnie Fielkow, CEO of the Jewish Federation of Greater New Orleans. “The Federation and the JCRC would like to thank the Governor, the Legislature, and all of the leaders whose tireless efforts over the years made the day possible.”

Fielkow added, “Our organization’s support of Israel is intrinsically linked to our longstanding support for a peaceful resolution of the persistent conflict in the Middle East. We continue to hope for a solution that ultimately results in two states — Israel and Palestine — and other neighboring countries living side by side in harmony, prosperity, and security.”

The Israel Action Network applauded Edwards’ order. William Daroff, senior vice president of public policy at Jewish Federations of North America noted that Louisiana becoming the 25th state with such a measure marks “a critical moment in which 50 percent of U.S. states have received the message that boycotting Israel is bad for business. These state actions address the discriminatory nature of BDS and the ability for states to control their own commerce. We thank the Governor and the many community activists who made this possible in Louisiana.”

Roz Rothstein, CEO of StandWithUs, said “we are heartened that Louisiana has taken a strong stand opposing discrimination against Israel. Earlier this year, the city of New Orleans rejected an anti-Semitic resolution, and now the state has made clear that taxpayer funds should not support businesses which discriminate.”

Josh Block, president of The Israel Project, said the group was “grateful to the governor for his leadership in fighting back against BDS discrimination” because the movement’s founders “have made it clear that they target Israel’s very existence, not its policies.”
Katz called it “a great day for the State of Israel and Louisiana,” and “we look forward to strengthening Israel-Louisiana relations.”