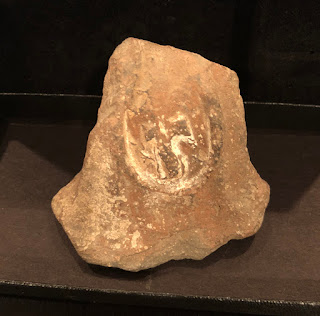 Seal of the High Priest of the Temple

One of the largest private collections of pre-Biblical, Biblical and post-Biblical antiquities from the Jerusalem area is in Birmingham, and on June 12 it will be publicly displayed for the first time.

The collection, assembled by Nate Salant, will be displayed at Birmingham’s Bais Ariel Chabad Center from 6 to 10 p.m. Admission is free, but donations are welcome and will go toward Chabad and maintaining the collection.

Salant has close to 100 ancient ceramics, four stone items associated with the Second Temple, and a wide range of coins, including a silver half-shekel from the Temple itself. He said through all the items, the exhibit will show the history of Jerusalem throughout the millennia.

In addition to the ceramics, he has a blade made of copper or bronze, probably used to defend Jerusalem against the Romans, with a faint but unreadable Aramaic inscription.

Among the Second Temple items is a solid rock bowl from the Herodian period, 60 B.C.E. to 70 C.E. Salant said it is not hewn and was made based on the Biblical requirements for items in the Temple.

He also has a seal from the High Priest, though he does not know which one. Recently, he was on a behind-the-scenes tour of Western Wall archaeology, and the tour guide showed a plastic replica of one of those seals. She was astonished when Salant mentioned he had a real one in his collection.

Another highlight of the collection is three chalices from the Davidic Kingdom era, 800 to 586 B.C.E. Salant purchased them 10 years ago and has never seen others come up for sale.

“They undoubtedly belonged to the royal family,” Salant said, because they were highly expensive in those days. “They were extremely difficult to make” because they were large, one-piece creations, he explained. “Out of every 100 they attempted to make, if the potter was really good, maybe three came out.”

There is also a completely intact “prayer bowl” with Aramaic inscriptions on the inside. The bowls were placed upside down underneath a house as it was being built, to keep evil spirits from coming into the house from underground. 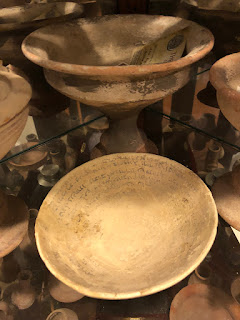 All of the items in his collection came from a government-licensed dealer of antiquities in Jerusalem, the only Christian-owned store in the Jewish Quarter of the Old City, and have authenticity documentation.

Before he can purchase an item, the dealer has to submit it to the Israel Museum’s Board of Antiquities, “and they have the final say on whether something is allowed to be sold and leave the country.”

When approval is given, it is an indication that the museum has similar items in its own inventory, he noted. Not identical items — because everything from that era was made by hand, “no two pieces are identical.”

Each piece has an identifying number, so the Israel Museum has a record of everything in his collection.

He has numerous items from the Canaanite period, 3100 to 2900 B.C.E., for context and to “show how things developed over time.”

A painted child’s drinking cup in the collection dates back to 1850 to 1500 B.C.E., the time of the patriarchs. While Salant uses those reference points, he emphasizes that he is not claiming that the cup belonged to Abraham, or that King David ever drank from any of the three chalices in his collection.

Some small pots in the collection were used for cooking. The modern-day viewer may find that hard to believe, as the items are able to hold the volume of a golf ball to a tennis ball. Salant reminds that back then, the average male was 5-foot-3, while women were 4-foot-9, and they did not eat large quantities.

Holding a dinner plate from the Herodian era, Salant said “this is what Jesus would have been eating off of.” The plate “is not flat, not perfect, but this is how things came out when things were made by hand.”

A pyxis in the collection dates to around 1400 BCE. He said it is most likely not a Jewish item, but was in the area of Jerusalem during the period when the Israelites were slaves in Egypt.

He has a pitcher that was used to make beer. “The ancient Egyptians taught the Jews how to make beer,” Salant said. He added that the recipe was recently discovered. “They made the beer — and it’s awful. But that’s what they had.”

Another unusual item is a document holder, a ceramic tube where one could put a document inside and seal it at both ends with wax and store it. The holder was also used to transport documents, and the recipient could either smash it to open it, or remove the wax at an end to preserve it for reuse.

He also has some small chips of tile from the floor of Herod’s sauna at Masada, having been given permission to keep them because they were broken off.

Many of his coins are from the Jewish revolt against Rome, and are inscribed “the freedom of Zion.” He also has numerous coins portraying Constantine.

A significant and rare coin in the collection is of Julian the Apostate. After the death of Constantius in 361 C.E., Julian became emperor and, unlike his predecessors’ embrace of Christianity dating back to Constantine, he rejected Christianity and tried to revive Roman traditions. “He hated the Christians,” Salant said.

He was more favorably inclined toward the Jews, though. In 363, he ordered and offered to finance the rebuilding of the Temple in Jerusalem, but the rebuilding failed, and by the end of the year Julian was dead.

Because he was emperor for less than two years, Salant said, “there were very few coins in his reign.” 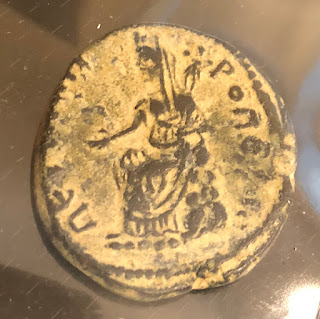 He also has a Nabatean coin from Petra, 106 C.E., portraying their Emperor Hadrian — not the Roman Hadrian.

A handful of tiny silver coins came from Jaffa in the time between 538 and 330 B.C.E. Referred to as Yehud coins, they were from the Persian era and used through the Hasmonean kingdom.

He also has coins “from the land the Magi (the Three Wise Men in Christianity) would have come from,” portraying King Aretas IV and his son, Malichus the Prince, dating from 9 B.C.E. to 40 C.E. “I’ve never seen these anyplace else,” Salant said. “For Christians, they’d have significant meaning.”

He also has a set of Islamic glass coins from 900 to 1100 C.E. “I got these because of the history of Jerusalem, and because I’d never seen glass coins before.”

Salant’s interest in collecting comes from a few avenues. His father’s oldest brother, Morris, was a collector, and “he rubbed off on me. I’m the only collector in my generation.”

But the biggest connection is personal. His great-great-great grandfather, Rabbi Shmuel Salant, who died in 1909, was the Ashkenazi Chief Rabbi of Jerusalem for almost 70 years, and led the Hurva Synagogue.

As part of the exhibit, Salant has numerous vintage pre-state photos of Jerusalem, including a copy of the oldest known photo of the Western Wall, from 1868. Other photos include Rachel’s Tomb in 1898, the Jewish Quarter after Arab riots of 1930 and 1936, and the Hurva Synagogue in 1939.

He also will have some contemporary Israeli jewelry that incorporates pieces of 2,100-year-old Roman glass.

Salant, who in 2014 retired after 22 years as commissioner of the Gulf South Conference, said he’s happy to try and accommodate groups that want to view the exhibit, and even other non-profits that might also want to display the artifacts.

Noting that the collection hasn’t been viewed publicly before, Bais Ariel Chabad Rabbi Yossi Friedman said “you will be amazed by what you’ll see. Don’t miss this chance to see first-hand the history of the Holy City of Jerusalem and see the tools that our Biblical ancestors used in their daily lives.”