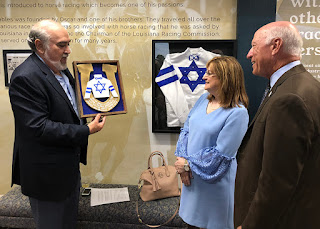 On June 12, the Oscar J. Tolmas L’Dor V’Dor Lobby was dedicated on the third floor of the Goldring/Woldenberg Jewish Community Campus in Metairie, outside the offices of the Jewish Federation of Greater New Orleans.

When the lobby project was announced last fall, Federation CEO Arnie Fielkow explained, “In Hebrew, L’dor V’dor translates to ‘from generation to generation. What better way to memorialize Oscar Tolmas’ life for generations to come than through a progressive exhibit exploring this life?”

Tolmas was born in New Orleans in 1920 to parents of Russian and Polish origin who had immigrated in 1915. He graduated from the Tulane University School of Law and was a member of the Louisiana Bar for 70 years.

He fought in the Pacific Theater in World War II, then practiced law with his siblings until 1948, when he became interested in real estate development.

The Tolmas Tract in Metairie had been the largest undeveloped tract on heavily-commercial Veterans Boulevard. One panel in the exhibit describes how it was recently developed into a complex that includes the first Trader Joe’s in the New Orleans area.

In 1952, Tolmas was bitten by the horse racing bug, and began Tolmas Racing Stables, and had racing silks in the motif of the Israel flag. A replica of that racing silk is in the exhibit.

He became so involved in racing, in 1992 he was asked to chair the Louisiana Racing Commission.

In 1963, he married Marjorie Ella Skinner, who was chief of nursing at two New Orleans hospitals. They did not have any children. She died in September 2013, and he died just over two months later, on Dec. 2. He left his entire estate to form the Trust.

At the reception, Federation President Henry Miller made a presentation to Lisa Romano and Vincent Giardina, who serve as trustees. Miller noted that having worked with Tolmas for so many years, Romano and Giardina knew him and his wishes better than anyone else.

Miller said the exhibit is “celebrating the legacy of tzedakah.”

He presented Romano and Giardina with an original artwork that depicted a horseshoe and the Israel flag racing silk.

“We are thrilled to create a permanent memorial to Oscar’s life,” Miller said. “It’s our hope that his life story and the impact he made on our community, both Jewish and non-Jewish, will be celebrated through this exhibit for generations to come.”

The racing theme even extended to the reception’s menu, which included Derby-style tea sandwiches with a Jewish twist, mint juleps and Derby mini-pies.

The exhibit was coordinated by Cait Gladow.