Over 370 campers in region aided by JCRS this year 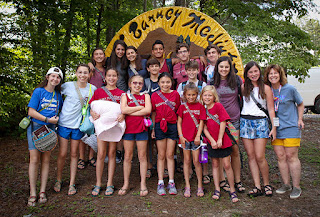 “From Bama to Barney”: Part of the large Alabama delegation to Camp Barney Medintz in Georgia this summer

With the summer camp season well underway, the New Orleans-based Jewish Children’s Regional Service announced its scholarship support numbers for this year, and is already looking ahead to its Chanukah project.

This summer JCRS is providing over 370 partial scholarships for kids in its seven-state region, from Alabama to Texas, to attend Jewish sleep-away camp.

In total, JCRS will allocate more than $200,000 on these youth to attend 35 different non-profit Jewish camps from coast to coast, including many to the Henry S. Jacobs Camp in Utica, Greene Family Camp in Bruceville, Tex., Camp Young Judaea-Texas in Wimberley, Tex., and Ramah Darom in the North Georgia mountains.

Also, this summer, JCRS is poring through applications for college aid for more than 100 Jewish students looking to begin or continue their studies. One example is Rachel, whose father was recently laid off from his job and whose family is struggling to afford the costs of in-state college tuition, room and board.

JCRS and its volunteer review committees in New Orleans, Houston and Dallas will allocate an average of $2,600 for the 2018-2019 academic year to approximately 100 Jewish students, to reduce the burden of debt and stress that these students and their families endure in continuing their education.

Though it is early summer, the agency is asking that families register now for the Oscar J. Tolmas Chanukah Gift Program. For 20 years, JCRS has brightened the Chanukah celebrations of hundreds of children who are facing difficult times by sending out gifts to boys and girls throughout the region. Some children are recovering from natural disasters, some have special needs, and some are new immigrants. Almost all come from families who are struggling to stay afloat in this economy.

JCRS wants these children to know that they are not alone, and that they are remembered by the Jewish community. Registration information can be found here.

The agency also administers the PJ Library program, which provides free Judaic books to children through age 12, in communities that do not otherwise have a PJ Library coordinator.

Established in 1855 as an orphanage in New Orleans, JCRS is currently the oldest existing Jewish children’s social service organization in the U.S., as well as the only regional Jewish child welfare agency in the country. JCRS provides needs-based scholarships for summer camp experiences, college aid and assistance to children with special needs.