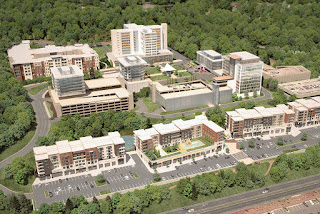 Illustration of possible development at old Trinity Hospital site in Birmingham, next to the Levite Jewish Community Center

So, how does an Orthodox family from Washington get involved in a project named Trinity Heights in Birmingham?

Berman Enterprises, based in Maryland, is looking to convert a former hospital complex into an upscale “mixed use development with many asset types,” including luxury apartments, condos, townhouses, office space, an upscale hotel, retail and an upscale senior living community, according to Ben Berman.

“We are hopeful and optimistic it will come together, Berman said. “A lot of things need to happen.”

Since October 2015, the large medical campus on Montclair Road just down from the Levite Jewish Community Center has been vacant. The hospital, Baptist Medical Center Montclair, had opened in 1966. After an acquisition in 2005, the hospital changed its name to Trinity Medical Center. In 2008, Trinity announced it would relocate to the half-finished HealthSouth digital hospital on Highway 280, but legal wrangling kept construction from resuming until 2013.

Berman first heard of the project when he saw an email in March 2017 touting the 1 million square foot Trinity hospital as a redevelopment opportunity. Knowing nothing about Birmingham, he deleted it.

A couple of months later he came across it again, and decided to do his usual first step — check the demographics of the area. He discovered that “the demographics in that area are really strong,” and having the JCC practically next door was also of note.

For the last 10 months, Berman has traveled to Birmingham monthly, and recently has spoken to neighborhood associations and other groups about the plans. Because what happens to the Trinity property has been of great interest to the JCC, Berman also met with boards of various Jewish community agencies and the LJCC staff to update them as well.

Berman knows this will be a high-profile project. “Everybody says ‘I was born there, my mother broke her foot and had surgery there…”

The property has “great bones” with large parking garages that are in good shape, and “views that are spectacular.” They are spending several months assessing the condition of the existing buildings, what can be repurposed, and doing due diligence before closing on the property.

While Berman Enterprises would be the lead developer, they want to work with outside developers on certain pieces, such as the condos, hotel, townhouses. The plan is to have everything in place so all components of the project will open at the same time.

One reason Berman has held so many public events in the area is to get input from the surrounding communities. For example, several people have mentioned a long-held desire to have a Jewish community senior living facility in Birmingham, a topic that has been debated for decades. Berman said “we are open to it” if someone comes along with expertise and a plan, and wants to talk about committing to a certain amount of space.

The company has set up a website, trinityheightsbham.com, where inquiries and suggestions can be made by the type of development.

While the Bermans are well-known developers in the Washington area, they have a Southern component to their history.

The family had a presence in Opp, Ala., where Melvin Berman — Ben Berman’s grandfather — was born. A 1916 ad in the Opp Messenger mentioned a Bargain Sale for I. Berman and Son, though Ben Berman wasn’t sure who I. Berman would have been.

When Melvin was 18 months old, the family made its way to DeFuniak Springs, Fla. During the Great Depression of the 1930s, Melvin Berman left Florida at age 17 and hitchhiked to Baltimore so he could take a job at a dairy store owned by an uncle.

After learning the business, Melvin started his own regional dairy company with a local distributor, and called his younger brother, Wolford, to join him.

After building a large dairy company, they took their new-found experience in land ownership and sales and started retail development. They built their first shopping center in Ingelside, Md., in the early 1950s, followed by many more. By 1962, they completely left the dairy business and were entirely involved in development.

They developed many of the first major shopping centers in the Washington area, and as a founding board member for Rouse Company, Melvin is credited with one of the most successful planned communities in the U.S., the 15,000-acre Columbia, Md.

Wolford’s son Gary and Mel’s son Dennis joined the company in the 1970s, and development activities expanded. They acquired surplus schools from the county and converted them into office parks.

In 1986, one such high school in Montgomery County became the new home for the Hebrew Academy of Greater Washington, which had been established in 1944. In 1999, the school was renamed the Melvin J. Berman Hebrew Academy.

When the savings and loan crash happened in the 1980s, the Bermans were in a position to acquire large amounts of real estate at depressed prices.

Today, three of Dennis’ sons and three of Gary’s sons are also with the firm, which manages more than 11 million square feet of commercial office, retail, industrial and residential properties. Aside from Metro Washington, the company now has properties in Pennsylvania, Florida, North Carolina and Illinois.