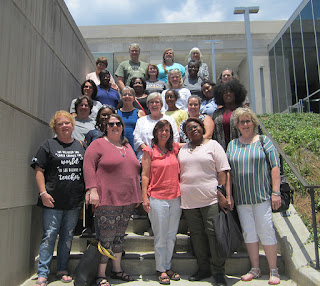 The New York-based Olga Lengyel Institute for Holocaust Studies and Human Rights, also known as TOLI, held its first Satellite Seminar of the summer in Jackson from June 6 to 8.

The Satellite Seminar program brings the TOLI educational model to teachers across the United States. Begun in 2011, these multi-day seminars are designed to provide a collaborative and safe environment in which teachers can explore the difficult subject of the Holocaust and other genocides, generally with a local theme.

The 23 educators who attended the Jackson seminar focused on comparative experiences between the Jim Crow laws, state and local laws in the South which enforced racial segregation, and German anti-Jewish laws, which institutionalized Nazi racial ideology against Jews.

Tracei Willis, a leader of the seminar along with Dolyene Davis, reflected on the origins of the connections between Jim Crow and the German anti-Jewish laws. “My students always asked ‘How is this possible? How were they able to do it?’ And I explain that it’s because these laws were created to separate people based on their differences.”

Willis teaches ninth grade in Louisville, and has taught about the Holocaust since 2005, but changed her approach to the subject after attending the Institute’s program in New York in 2016. This past March she attended an international TOLI seminar in Austria.

The seminar included testimonies by Holocaust survivors, pedagogical approaches, and a visit to the new Mississippi Civil Rights Museum. One teacher remarked on how “the visit to the Civil Rights museum had a real impact on my way of thinking… how the Nazis slowly took away the people’s humanity by taking their names was eye-opening.”

The seminar also included a visit by Jo Ivester, author of “The Outskirts of Hope,” a memoir depicting her experience of being the only Jewish and white person at her school in Mound Bayou, Mississippi, during the height of the civil rights movement.

The educators discussed the dangers of segregation, using writing as a tool for reflection and as a technique for how to approach such sensitive issues in the classroom.

There was also a discussion of the long history of relations between the Jewish and African-American communities in Jackson. Some teachers were surprised by these relations, exclaiming that they “never realized the similarities or how active Jews had been during the Civil Rights Movement.” Davis described how Beth Israel “was actually bombed in the 60s because they worked with the civil rights movement,” showcasing how these two communities have a complex, storied history of suffering and solidarity.

Beth Israel, which dedicated a Holocaust memorial last year, was visited by the group.

Organizers sought to model cooperation and sharing, citing the group discussions as a “safe place to try and fail.”

“You must model humane teaching if you want students to adopt a more humane way of treating others and become our next leaders,” one teacher observed.

The Olga Lengyel Institute is named after a survivor of Auschwitz who dedicated her legacy to education. The mission of TOLI is to educate students in the United States, Europe and other parts of the world about human rights and social justice through the lens of the Holocaust and other genocides so that such atrocities may never again take place.

To accomplish its mission, TOLI provides professional development seminars for educators in the U.S. and abroad that link the lessons of the Holocaust and other genocides to current world events, thereby working with teachers to promote a human rights and social justice agenda in their classrooms.

This summer, there are 13 seminars across the U.S., and seven more around the world. Plans are underway for another seminar in Jackson next summer.