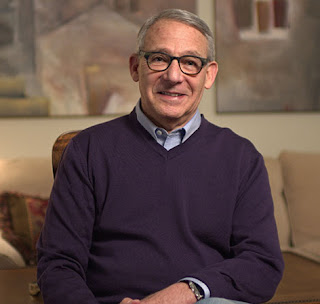 When asked about his work with United Ability as the organization’s first medical director, Mark Cohen steers the conversation away from himself and talks passionately about the work that the agency, formerly known as United Cerebral Palsy of Greater Birmingham, does for children and adults throughout the region.

Cohen will be the honoree at United Ability’s Journey of Hope gala, Aug. 4 at the Alys Stephens Center. Mandy Harvey will perform, and the program will be interpreted in American Sign Language. Harvey, a deaf jazz and pop singer and songwriter, was on the 12th season of “America’s Got Talent,” winning the Golden Buzzer.

Cohen said his work with United Ability, like most good things that have happened to him, came through his wife, Lynne. A member of the Civiette Club, she was involved in the annual Mall Ball held at Eastwood Mall for UCP. He started assisting with the fundraiser, then was asked to be on the agency’s board.

“It’s been great seeing the evolution of United Ability,” he said. “It’s a very rewarding association for me.”

After he retired in 2000, “they asked if I would work with them, and it seemed like a natural transition,” and he served as medical director for “three or four years.”

One of the first things he did was try to bring medical services in-house to better treat clients.

To send a participant to the University of Alabama at Birmingham for services required coordinating with the special mass transit service, a nurse and two or three hours. He felt it would be “a much more efficient way of delivering medical care if we could bring some of that in-house.”

He spoke to Mary Lynne Capilouto, then the dean of the dental school, to see about partnering with the school “and maybe have some of the residents come out and do dental work,” and she agreed. The school was also redoing its dental suites, so some of the older equipment went to UCP.

Cohen also approached oral surgeon Michael Koslin, and “it took about one minute” for Koslin to agree to do dental extractions for clients, and “he did that for years.”

Vision care was also a high priority, because many individuals use augmentative communication devices — much like what Stephen Hawking used — “so vision is very important” in reading and using those devices.

Cohen approached Henry Peters, the first dean of the UAB School of Optometry, who “was very gracious, and they had redone their optometry lanes,” so they wound up with a full setup at LINCpoint, the agency’s adult day care facility, along with the dental room.

Not only did this give the clients preventative care, Cohen said, it enabled students to get a broader range of experience in treating those with special needs. “If you’re cognitively impaired and mobility impaired, communication skills may not be good. As a student, to work through an exam like that and get the person a proper prescription” is a valuable skill, he said.

Alison Berman, the agency’s chief development officer, said dental and vision “are basic services. People have to have these services.”

Cohen “laid the groundwork” for medical services at the agency, Berman said, and Charlie Law currently directs the Ability Clinic. He is the only practicing physician in Alabama certified in both pediatrics and adult rehabilitation.

Cohen said he takes the most pride in seeing the health and wellness programs under Law’s leadership. “We’re very proud of the work he has done” with 1500 active patients.

Cohen said having everything under one roof is a major convenience. Children can receive all types of therapy services without having to leave the building, parents don’t have to go all around town to visit several offices and miss a lot of work, and they can have their care “delivered in a very coordinated manner” as different therapists are under the same roof and can easily check in and assess needs and progress.

United Ability has 11 programs in what Berman called a “life spectrum program” from birth throughout life.

The programs begin with Early Intervention, where the UA team does in-home visits with infants and toddlers in a 7-county area, at no cost to the parents. Any child from birth to age 3 can receive therapy services “in their natural environment,” Cohen said. About 750 children are being served that way.

Hand in Hand is a preschool program for ages 6 weeks to 4 years, with just under 200 students. Cohen stressed the importance of early intervention. “If we start children really young and give them the therapy and educational services, when they leave us at age 5 and go to Kindergarten, they are better prepared to reach their potential.”

Hand in Hand an inclusive environment, with about two-third of the students typically-developed and one-third with special needs. For example, Berman said, a child who can’t walk yet but is undergoing therapy wants to emulate classmates, so is motivated to keep working, while children who can walk develop empathy.

“It’s amazing to see the children helping each other, just on their own,” Cohen said. “They are interacting as we all should interact with people with disabilities.”

The playground was built especially for their clients’ needs, and is fully wheelchair accessible. A section of the playground area, Justin’s Place, is dedicated in memory of the Cohens’ son.

Because Hand in Hand has a limited capacity, Childcare Enhancement with a Purpose began in 2002 to offer free training, consultation and onsite technical assistance to community childcare teachers. Over 40 facilities have hosted the training, reaching over 650 teachers in child-care settings. After the training, some facilities have expanded their special needs enrollment.

Parents as Teachers was established to provide home-based services to families, with about 70 families currently served. “Most people don’t have any experience or know how to handle” a child with a disability, Cohen said. The program helps parents learn how to take care of the child, and United Ability strives to provide needed services.

Events like Journey of Hope help the agency provide equipment and technology that parents need but can’t afford, Cohen said.

Before 2000, the agency was housed on 11th Avenue North in downtown Birmingham. It was evident that a new building was needed for the children, and the adult programs were housed in a converted grocery store that “wasn’t really built to what we needed,” Cohen said.

In 2001, Hand in Hand moved to a new campus off Lakeshore Drive, and LINCpoint soon followed.

Cohen said they wanted to have a lodge appearance for LINCpoint, to make it an inviting space. They were also able to design everything to their needs. For example, the lower three feet of the walls have stonework. “Power wheelchairs can take out a sheetrock wall in a heartbeat,” he explained.

Roughly 170 adults ages 21 and up are served daily at LINCpoint. About half come from group homes in the area.

There are numerous learning areas that simulate normal life, so clients can learn basics such as cooking in a real kitchen, how to do laundry, pick out clothing in the morning, and there is a large space for arts and crafts.

The LINCpoint building also houses Gone For Good, a document shredding service “that gives us the ability to employ many of our adults” and let them earn a paycheck. There is also a collating and assembling service with many high-profile clients.

For those able to enter a more traditional work environment, there is an Employment Services Division that works with many local employers, and also does outreach in many area high schools. Last year, employment services had 166 participants. 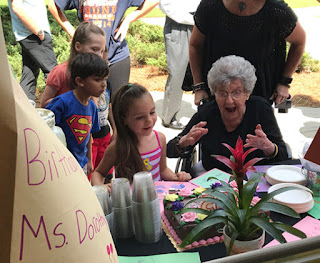 On June 15, Dorothy Levy celebrated her 106th birthday with a visit to LINCPoint. Last year, she had her 105th birthday with the children of Hand in Hand (pictured here), and said she would return the following year to celebrate with the adult program.

In 1938, Levy had a son, Harry. Back then, cerebral palsy was little-known, so she had to travel to New York to get his mystery condition diagnosed. Upon returning to Birmingham, she worked with local physician John Simpson. In 1948, she, Simpson and others, including Rabbi Milton Grafman of Temple Emanu-El, established what was then called Spastic Aid of Alabama, which developed the Cerebral Palsy Center to serve children. It was at the center that Harry met his future bride, Sepia, who also had cerebral palsy.

In 1972, the group became United Cerebral Palsy of Alabama, then changed to United Ability in February 2017 to reflect how it serves people with all types of disabilities, as only about one-third of the clients have cerebral palsy. Clients include those with intellectual disabilities, traumatic brain injury, developmental disabilities, cerebral palsy, autism, Down syndrome and spina bifida.

Last year’s Journey of Hope honoree was Ronne Hess. Standing in the Hand in Hand building, Berman said Ronne and Donald Hess “led the campaign to get this place built.”

She added, “Mark has been involved for over four decades, and so has Ronne.” The Hess and Mitnick families dedicated the LINCpoint Health and Wellness Center in honor of Cohen.

Noting the organization’s 70-year history, Cohen remarked that the current chief executive officer, Gary Edwards, has been in that role for 35 years. Cohen called him “a real visionary (who) has pushed us to provide the level of care and learning that we provide.”

Cohen added, “I don’t know that you could find any organization and facility that does it any better than we do.”