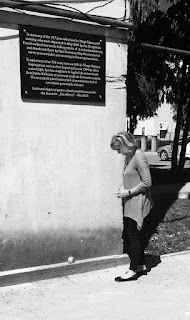 Thanks to the efforts of a Birmingham-area teacher, a town in Romania that was the birthplace of one of Birmingham’s Holocaust survivors now has a memorial to the town’s little-remembered Jewish community.

Amy McDonald, a history teacher at Shades Valley High School, made a return visit to Targu Lapus in April, visiting local schools and speaking at the memorial’s dedication.

McDonald is author of “Determined to Survive: A Story of Survival and One Teacher’s Passion to Bring That Story to Life,” about Max Steinmetz. She worked with him for two years to produce the book, which describes his childhood in Romania, to surviving the horrors of the Szaszregen ghetto, Auschwitz, Dachau, a death march, to liberation by American soldiers.

In 2016, she received a grant from Fund for Teachers, enabling her to visit Germany and Romania for research on the book. While in Targu Lapus, a town of about 12,000, she spoke to students and teachers about her research, and the importance of Holocaust education.

“One of the most surprising parts of Amy’s time in Romania was the total lack of knowledge, an almost complete erasing, of once vibrant Jewish communities,” said Joyce Spielberger, interim executive director of the Birmingham Holocaust Education Center. “There also seemed to be very little overall knowledge about the Holocaust.”

“After the trip I stayed in touch with people in the town,” McDonald said. She connected her Holocaust studies classes with the school in Romania and they read “Night” by Elie Wiesel together. “When my book came out, we read that together,” she said.

They also communicated through a blog, “Together We Remember: A Romanian and American Classroom’s Study of the Holocaust.”

McDonald first came to BHEC in 2010 for guidance in developing a Holocaust studies curriculum. She attended BHEC-sponsored workshops, then received BHEC scholarships to attend educator workshops with Jewish Foundation for the Righteous in the U.S. and Europe.

Spielberger said, “In short, she has become a leading Holocaust educator and frequently speaks at national workshops, recognized as an expert in the field.”

Last October, McDonald got an invitation from Mariana Pop, headmaster of the Petru Rares High School in Targu Lapus, and thought “that would be amazing.” She figured that she would spend a couple of days in the school talking about Steinmetz, discussing the Holocaust, “whatever they wanted me to do.”

She received a grant from the U.S. Holocaust Memorial Museum for the trip, but also had to get approval from the superintendent and principal, since the trip would be during the school year so she could “connect the classrooms.”

Her trip was from April 27 to May 9, and the teachers in Romania kept McDonald busy. “They took me to class after class.”

Visiting the high school, she immediately was struck by the “culture of respect. When you walk into a class, all of the students stand up. I almost passed out.”

Also, when she walked into the classroom, her book was sitting on all the tables.

Because “I have this issue of continuing to stir the pot,” before her return trip, McDonald had asked some of her friends in the town if there was a Holocaust memorial, or something about the Jewish community that had lived there, and she was told there wasn’t.

She asked if the town would be receptive to having a plaque in the town, and was told that the mayor would have to approve it. But the mayor, Mitru Lese, does not speak any English.

She sent a letter, saying “it is extremely important to challenge students with not just the facts and statistics of what happened during the Holocaust, but to tackle the more complex questions of how and why it happened.”

She contacted the Bucharest-based Elie Wiesel National Institute for Studying the Holocaust in Romania, and was told that Holocaust memorials in the country can be very political. She asked the museum to send the mayor the proposal, which they did on official government letterhead, as the museum is supported by the government.

McDonald, who hadn’t heard anything from the mayor’s office previously, then heard from the mayor’s assistant, saying he had approved the proposal. “Now, how do I get a plaque made in Romania,” she wondered.

A couple of the teachers connected her with a plaque maker in a nearby town, but the next step was coming up with the text. “Even that, you had to be careful” to say the right things and get it translated properly.

The BHEC funded the actual plaque, which reads “In memory of the 717 Jewish victims who lived in Targu Lapus and vicinity, who were deported in May 1944 by the Hungarian Fascist Authorities to the killing center of Auschwitz-Birkenau and murdered there by Nazi Germany. May this memorial serve as a reminder and warning to future generations.”

When McDonald first saw the finished plaque, “I couldn’t believe it,” as it was much larger than she had envisioned.

The plaque is located on the side of a building by an empty lot where the synagogue used to stand. The dedication took place on May 4, “because that is when the Jews of Targu Lapus were rounded up and sent to the ghetto.”

In her dedication speech, McDonald said the ceremony was to “remember people, not just facts or statistics. People with hopes and dreams, just like all of us.”

She had “great hope” in seeing so many youth at the dedication. “As Max Steinmetz would say, they are our future. May they choose compassion and decency, take a stand against what is wrong, protect what is right, and most important, never forget.”

Under the plaque, she lit a candle that the Steinmetzes had given her.

Before she returned to Alabama, the students gave her a stack of letters for Steinmetz, and she filmed him reading the letters so the students could see his reaction.

“After reading these letters,” he said, “I am glad we started this and followed through.”