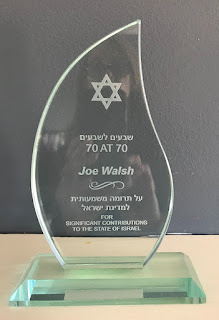 Joe Walsh tweeted a photo of the Israel “award” he received as a ruse to get him to Washington for Sacha Baron Cohen’s new show.

Former Alabama Chief Justice Roy Moore is among those duped by British comedian Sacha Baron Cohen, and is threatening legal action against Showtime if the resulting show is aired.

Cohen used Moore’s support of Israel as a lure to convince him to come to Washington for what turned out to be a bizarre interview.

Cohen’s “Who is America?” is set to debut on July 15 for a seven-episode run. Cohen, who always has an alter-ego persona in his shows and films, last did a television series a decade ago as interviewer Ali G, an English rapper.

Former U.S. Congressman Joe Walsh of Illinois, who is now a conservative talk show host, was also lured with the prospect of doing an interview about Israel. This week, he called for a boycott of Showtime because of Cohen’s show.

Of the first eight who said they were interviewed by one of Cohen’s characters for the show, the Israel angle was used for only one other person, Rep. Matt Gaetz of the Florida panhandle.

Gaetz told the Daily Beast he was interviewed in his Congressional office, with the conversation keeping to the topic of Israel. When asked to endorse weapons systems and hold up photos of them, he declined, saying he wasn’t familiar with the systems and wouldn’t want to talk about them.

Gaetz said he is a fan of Cohen’s other characters, and “can’t wait to see” his appearance on the new show.

Earlier this year, Gaetz was criticized by many in the Florida Jewish community for giving a ticket to the State of the Union address to alt-right figure Chuck Johnson, who also dabbles in Holocaust denial.

Moore said he was invited to Washington to receive an award “for my strong support of Israel in commemoration of her 70th anniversary as a nation.” He attended the Nov. 18 Leadership Gala in Decatur, organized by the Alabama-Israel Task Force.

Moore explained, “Because Alabama has always been at the forefront of support of Israel and because I share a strong belief in God as the Creator and Sustainer of all life, as does Israel, I eventually accepted the invitation” to Washington.

He had no idea Cohen was behind this effort to “embarrass, humiliate, and mock not only Israel, but also religious conservatives such as Sarah Palin, Joe Walsh, and Dick Cheney.”

As an Alabamian, Moore said, “I believe in truth and honesty, which the shadowy media groups behind this illicit scheme do not. Obviously, people like Cohen who mock not only Israel but those who support Israel and the principles upon which America is based, do not share my beliefs.”

He referenced “several court cases” he is involved in “to defend my honor and character against vicious false personal attacks by liberals like Cohen.” When running for U.S. Senate last fall, several women came forward with allegations of inappropriate relationships Moore had with them when the women were underage, allegations Moore strongly denied. Moore narrowly lost the Dec. 12 election to Democrat Doug Jones.

Because of the nature of the denials, in January one accuser, Leigh Corfman, filed a defamation suit against Moore and others who defended him; Moore countersued in April, accusing the women of defamation. Moore’s suit also names Richard Hagedorn, a native of Gadsden’s Jewish community, who has known Corfman for 40 years and whose brother, David, works for the Washington Post — the publication that was at the forefront of reporting the women’s stories.

Noting his current court cases, Moore said “If Showtime airs a defamatory attack on my character, I may very well be involved in another.”

He concluded, “As for Mr. Cohen, whose art is trickery, deception, and dishonesty, Alabama does not respect cowards who exhibit such traits! It’s been a long time since I fought for my country in Vietnam. I’m ready to defend her again!”

Details of the Israel award ruse were given in a series of tweets by Walsh, who said he had been contacted by “an Alexis Rothe from “yerushalayimtv.com” and a “Alexis Sampietro,” who was randomly CC’ed on an email thread.”

At press time, the website in question was nonexistent, a web archive from January was a blank page. A Google search for the site resulted in a description of “Broadcasting to people of the Jewish faith and Jewish communities worldwide. Satellite, digital, cable and online.”

Like Moore, Walsh was flown to Washington and expenses were paid. Walsh posted the receipt for a $499 room at the Hay-Adams Hotel, apparently paid for by Daniel Nuzzi of Los Angeles.

“The producers said they needed to film a pre-interview that would air as a part of Israel’s 70th birthday celebration,” Walsh said. “I was rushed to the studio, production was a mess, I sat down and we started talking pro-Israel stuff, Israeli defense, and then out of left field the interviewer starts talking about how children should defend themselves against terrorist attacks.”

The interviewer showed Walsh several articles about children stopping terrorists, and wanted him to read off a teleprompter. “I stopped and questioned their direction,” Walsh said. “And just like that producers rushed me out of the studio as an apparent fight broke out. Strangest interview of my life — don’t think they spoofed me very much — but I did get this award,” and he posted a picture of the award he was given.

Sarah Palin was tricked into an interview, purportedly for a documentary honoring American veterans, and the interviewer was dressed as a disabled U.S. serviceman in a wheelchair. On her Facebook page, she wrote “I sat through a long ‘interview’ full of Hollywoodism’s disrespect and sarcasm — but finally had enough and literally, physically removed my mic and walked out.”

She wants Showtime and Cohen to donate the show’s proceeds to a charitable group “that actually respects and supports American Vets.”

Dick Cheney was also interviewed, and was asked to sign a large milk jug that was referred to as a “waterboarding kit.”

Cohen apparently responded through the character of Billy Wayne Ruddick Jr., who interviewed Palin, saying he didn’t claim to be a war veteran, but was in the service — United Parcel — and fought for his country when he shot a Mexican who came onto his property.

He claimed former admiration for Palin “telling the truth about Obama’s birth certificate and the location of Russia,” but accused her of “bleedin’ fake news” and demanded an apology from her.

“Ruddick” has a new website, truthbrary, filled with sendups of conspiracy theories.