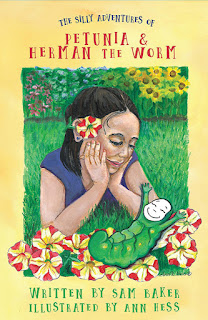 Sam Baker of Scottsdale, Ariz. made his book debut in April, penning a story that was inspired from his childhood in Clarksdale, Miss.

“It’s been fun writing” the book, “The Silly Adventures of Petunia and Herman the Worm,” he said. The 95-year-old author then added, “I’ve got two more in the works.”

Petunia is a 6-year-old girl, while Herman is a caterpillar with a human-looking face, arms and hands, and the ability to speak. Naturally, Petunia and Herman become friends.

The Herman stories began when his children were young and they were living in Florida. His work with the U.S. Coast and Geodetic Survey required him to “go down-range” two weeks out of every month.

Stationed at Cape Canaveral, Baker was in charge of being sure that all the tracking devices for missile launches were tied to the grid.

When he was away, his wife would read stories to the children at bed time, but when he came back to town, they wanted him to come up with an original story.
He created Herman and tied him to the space program, having him go into space with the astronauts.

The son of a cotton farmer, Baker recalled they had a lot of cucumber plants and dill plants. He would watch the large caterpillars that were attracted to the plants, and when they neared the pupa phase, he would put the caterpillars in a shoebox and “watch them come out as beautiful swallowtail butterflies.” He used that memory to create Herman.

His family lived two blocks down from Beth Israel in Clarksdale, which in the 1930s was the largest Jewish congregation in Mississippi; it closed in 2003. In the 1930s, there were over 60 children in the religious school, and the local Orthodox and Reform communities shared space.

“I would walk there Friday nights, when I wasn’t in the band at ballgames,” Baker said.

Emma, who is in the book, was the cook his family had when he was growing up. “My mother had a store and worked all day,” he said. “The depression wiped it out.” During the depression, his father had to renegotiate to keep their home.

He later worked for Mr. Bloom, “who had a bread route.”

He offered to take a year off from school to make money, but his mother told him “they can take your money, but they can’t take your education.” He wound up getting a job at the Mississippi State stadium for 25 cents an hour.

“I was in school when the war started, and I volunteered for the Marine Corps four months after Pearl Harbor,” he said. Since he needed a birth certificate, he went to Jackson to get one — and that’s when he discovered he had a different name.

They did not have a record of Samuel Baker, but they did have a Leonard Samuel Baker. They asked him if Samuel was his middle name, and he said “I don’t have a middle name.”

Since he was born on Shabbat, his parents waited to fill out the birth certificate. Unbeknownst to them, a nurse wrote down “Leonard” as a placeholder, and it stayed on the official document. On the book, he goes by Sam Baker.

Looking back on it, “I don’t know how that thing got so messed up.”

When he brought the paperwork back to the Marines, the sergeant said “Son, you want to join the Marines Corps and you don’t know your own name?”

After time at Paris Island, Camp Lejeune and Camp Pendleton, he went to Pearl Harbor for his first platoon — which turned out to be a brig platoon, prisoners who were given the option to enlist. “They were the sorriest-looking troops, and this was my first platoon,” he said.

He served in the South Pacific, including Guadalcanal, then headed to Okinawa. After the war, he was in New Orleans and Pensacola for a brief time, and joined the U.S. Coast and Geodetic Survey.

He retired in 1978, then worked for Teledyne and Brookhaven National Laboratories on a fusion project. After that, he was the world’s first GPS salesman.

The units weighed 45 pounds and took 6 hours to get a position, but he calls GPS “probably one of the greatest inventions.”

When Baker got his first computer, son Michael urged him to write down the Herman stories. He eventually decided to publish the stories, and daughter Sally, a publicist, helped him find illustrator Ann Hess and a publisher.

He said the book teaches children things they need to know — to wear their seatbelts, be courteous to people and “laugh and enjoy life, and still be good.”

Approaching his 96th birthday, Baker spends 45 minutes a day in the gym and is active on the resident advisory council at his development.

His sister just celebrated her 99th birthday at the Jewish Home in Memphis, and he plans to visit her soon. While in the area, “I’ll drive to Clarksdale and visit the place.” Walking through the Jewish cemetery there “is like memory lane… it’s sad to go back, nobody is there… all my friends are gone now.”