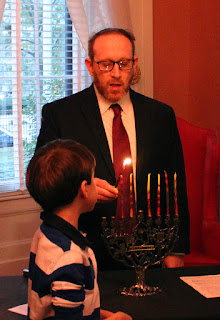 Rabbi Jeffrey Kurtz-Lendner at the Chanukah ceremony in the Mississippi Governor’s Mansion, December 2016.

Beth Israel Congregation in Jackson announced that Rabbi Jeffrey Kurtz-Lendner has requested not to have his contract, which ends in the summer of 2019, renewed.

In a letter to the congregation, Kurtz-Lendner said “I will be moving my rabbinate into a different direction” starting next summer.

“Over the last two years my family and I have very much appreciated the warm welcome you gave to us,” he said. “I will always value the friendships I have shared with you, the relationships we have established, the special moments we have experienced together.”

Beth Israel President Susan Fijman said “we appreciate Rabbi Kurtz-Lendner’s service to our congregation and the contributions he has made to the Jewish community and the community in the greater Jackson area,” and they will work together on a smooth transition.

Beth Israel is the only synagogue in Mississippi with a full-time resident pulpit rabbi. Over the last two years, Kurtz-Lendner has been active in the broader community.

Kurtz-Lendner was executive director of Hillel at Tulane from 1994 to 2001, assistant director of the New Orleans Jewish Community Center from 2001 to 2004, and rabbi of Northshore Jewish Congregation in Mandeville from 2002 to 2007.

In 2007 he became rabbi of Temple Solel in Hollywood, Fla., and was director of Jewish learning, education and outreach at the David Posnack JCC in Davie, Fla., before taking the position in Jackson in 2016.

From his Florida experiences, he brought the idea of establishing a faith-based council for Mississippi, suggesting it to Governor Phil Bryant. The council melds the resources and expertise of state government with that of faith-based institutions, facilitating better distribution of services to those in need.