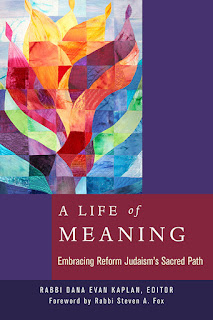 While “A Life of Meaning: Embracing Reform Judaism’s Sacred Path” contains 56 pieces about different aspects of Reform Judaism, Rabbi Dana Kaplan says the book is not “what Reform Judaism says about…”

Kaplan, who has served as rabbi of Springhill Avenue Temple in Mobile, edited the work, which was published recently by the Central Conference of American Rabbis Press.

Kaplan has written numerous books on Reform Judaism, and said there have been “a number of these collections over the years of the Reform movement,” on “different aspects of Reform Judaism. I thought it was time for another.”

He started on the book when he was still in Jamaica, reaching out to potential writers, and finishing with 56 authors.

“It wasn’t intended to be only Reform rabbis,” he said. Most of the writers are, but there are a few cantors and non-rabbinic scholars in the book.

Kaplan started assigning different topics with the suggestion that the pieces be short, interesting and somewhat personal.

The book is divided into six sections, with the first section containing essays about Knowing God, followed by sections on Choosing Covenant, Connecting to the Divine, Living the Texts, Building Community and Dignity of the Other.

One piece reflects on teaching about God after being told “I love discussing this stuff but I don’t get the God thing.”

Another author is a Holocaust survivor’s child, whose piece explains how her mother’s trauma was transferred to her.

A discussion of the covenant leads to exploring pluralism, freedom and modernity in the context of covenant. What does the covenant between God and the Children of Israel mean today, and how can one embrace the concept and not be seen as excessively exclusionist in today’s society?

Ben Zeidman of El Paso discusses the concept of individual religious autonomy within Reform Judaism. What, then, if the autonomous individual decided he or she does not need to do anything?

“How do you embrace religious autonomy while creating an environment where people will do many ceremonies and rituals?” Kaplan asked. In his introduction, he notes how the Reform movement started with considering Jewish law “antiquated and purposeless,” but many Reform Jews now argue that Jewish law should be a focus of Reform Judaism.

“It is our covenantal responsibility to undertake the task of interpreting the Jewish religion in the light of who we are today,” he wrote.

In the book, Kaplan’s essay is on “Converting to Judaism.” The book concludes with Rabbi Eric Yoffie’s piece on “The Importance of Reform Judaism.”

Kaplan said “A Life of Meaning” is “designed to get people thinking” about “what different Reform perspectives might be and what they might believe.”

Each essay is syncretic, going in multiple directions. Also, “each essay was from the perspective of that particular author, so we’re not trying to be comprehensive” about every aspect of Reform Judaism.

For the last couple of months, Kaplan has been leading a Wednesday night Torah study group at Springhill Avenue Temple, picking out 12 chapters from the book so one can be discussed each week.