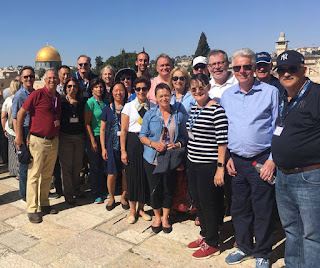 With a large Jewish student population, Tulane University has always had close ties with Israeli institutions. In June, Tulane President Michael Fitts made his first visit to Israel as part of a 17-member delegation of university presidents, seeking to further boost bilateral academic research and exchange opportunities while learning about Israel’s technological innovations.

Organized by the American Jewish Committee Project Interchange, the trip encourages university presidents from the United States to exchange ideas with their Israeli counterparts and explore opportunities for collaboration similar to such academic partnerships as the Jacobs Technion-Cornell Institute and the University of California and Israel Innovation Authority Partnership.

“I’ve been all over the world,” Fitts noted. “Israel is a source of great education and great research, so it’s a natural place to develop relationships.”

While Fitts is a Quaker, his wife and daughters are Jewish. His wife has been to Israel several times, and a daughter has done Birthright, so when he was invited to be part of this delegation, “I figured I should go.”

He said he has always been fascinated with how a country that has no natural resources has been so successful, “and it didn’t disappoint… it’s an economic juggernaut and its universities are incredibly strong.”

He said the trip was “an exciting opportunity to explore ways in which Tulane can collaborate with Israeli universities and other institutions around the world to address longstanding societal problems in the environment, healthcare, energy and numerous other areas.”

According to the AJC, the trip was designed to provide “a variety of perspectives from Israeli Jewish and Arab experts across the political and social spectrum,” and discussions on “Israel’s high-tech and entrepreneurial landscape, security challenges, diversity in Israeli society and Israel’s approach to global humanitarian aid.”

They visited the Technion, “the MIT of Israel,” where Tulane already has relationships through its graduate students.

They also visited Ben Gurion University, which Fitts noted is “deeply involved in startups.” The university, Beersheva and the prime minister’s office are developing CyberSpark, a major cyber innovation community bringing together academia, government and business. “It’s something we’re looking at here at Tulane,” he said.

The delegation also visited Bar Ilan University and Tel Aviv University, and met with members of the Knesset.

Fitts noted that it is rare to find a U.S. university that is as young as those in Israel but has achieved such a level of excellence in such a short time.

Tulane’s existing exchanges and study abroad programs “have been extremely valuable for us,” Fitts said. As the university expands its emphasis on science, engineering and medicine, the benefits of international partnerships will be even more helpful, he added.

“This is letting us build bridges between institutions, both within the U.S. but also between the U.S. and Israel in a way that would have simply not been possible without it,” said Daniel Shantz, who holds the Entergy Chair in Clean Energy Engineering and is a professor in the Department of Chemical and Biomolecular Engineering at Tulane.

The Grants’ gift enabled Shantz to travel to Israel in May 2017 to meet with academics and government officials there. The gift also allowed Tulane student Imri Frenkel, then a rising senior majoring in chemical engineering, to participate in a summer internship in the Segal-Peretz lab at the Technion, working on ultrafiltration membranes for water purification, building on his research experience in the Albert lab at Tulane.

Tulane also has the Mandel-Palagye Program for Middle East Peace, where 15 students are selected for the summer program. “The students start here and take several classes on various aspects of the Middle East” for two weeks, Fitts said, then they spend three weeks in Israel and Jordan, living at Hebrew University.

Not everyone was pleased to learn about Fitts’ trip. In a letter to the student newspaper, Tulane Students for Justice in Palestine said Fitts’ visit to Israel was “a hypocrisy of Tulanian values and a regressive step away from expanding diversity among our student body,” saying Israeli universities “support racist and Islamophobic violence” and charging Tulane with being “an unsafe home for Muslim students” who are being “forced to invest in their own oppressors.”

Fitts said that as a university president, “I’m interested in partnerships with great universities wherever they are. I’d meet with presidents of Palestinian universities as part of that.”

The delegation traveled to Ramallah to meet with Palestinian leaders. They met with Elias Zananiri, vice-chairman of the PLO Committee for Interaction with Israeli Society, and Khalil Shikaki, director of the Palestinian Center for Policy and Survey Research, which does surveys of the general populace to try and figure out ways to reach a peace agreement between Palestinians and Israelis.

A highlight of the trip, Fitts said, was being able to meet with Israelis and Palestinians, and listen to their stories.

They visited a kibbutz near Gaza, where a woman who grew up there spoke about staying there despite constantly being under attack from Hamas in Gaza. They also visited with a Palestinian in the West Bank, who spoke about how he was born there. “You had a sense of deeply rooted connections with the land on all sides,” Fitts said.

He added, “to an outsider, it sounds like they ought to be able to reach an agreement, but obviously there’s a lot to get to between here and there.”

Aside from the academic angle of the trip, Fitts said it is “exhilarating” to visit the area, especially seeing how religions from every part of the world interact, for better or worse — he visited the Church of the Holy Sepulchre and saw how three different sects lay claim to the site that is holy for Christians.

He added that in the United States, seeing something 100 years old is remarkable, but in Jerusalem, 2,000 years is commonplace.