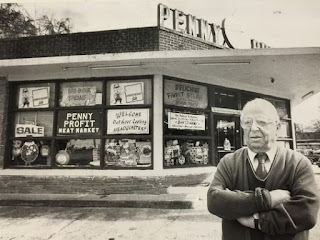 The legacy of beloved seasoning blends from the Hanan family of Montgomery continues to expand, as Mis’ Rubin’s Magic works its way around the region.

Julia and Rubin Hanan, who were part of Montgomery’s Sephardic community, owned the Penny Profit Grocery Store, and long-time Montgomerians remember with fondness the store’s Black Magic and White Magic seasoning rubs — which are now available in numerous stores and online.

Robert and Ashley Landers are the driving force behind the seasonings’ revival. Rachel Raybin, daughter of the Hanans, said “We’re thrilled that the legacy continues.”

Julia’s father, Eliezer Cohen, was one of the first Sephardic men to immigrate to Atlanta. In 1912, Julia was born in Atlanta.

Rubin had left Rhodes and wound up in Montgomery in 1925 to pursue an education, but wound up also pursuing Julia. In 1935, they were married in a traditional Sephardic ceremony.

With both of Julia’s parents gone, the new couple moved to Atlanta, but after their infant daughter died at the age of 8 months, they moved back to Montgomery for a new beginning.

Julia was known as “Mis’ Rubin.” Raybin explained that customers “thought Rubin was our last name.” That name would soon appear on seasonings Julia developed, to make their meats stand out from the competition, especially the A&P across the street.

Julia’s “claim to fame was her cooking,” Raybin said, which was ironic — growing up, she was regarded as “a little princess and didn’t cook.” It was Rubin’s mother who taught Julia how to make the traditional Sephardic dishes, which would be assembled in Julia’s cookbook, “Dulce Siempre,” in 2001.

The only way to get Black Magic was to buy the steak it would go on. For favored customers, Rubin would give a little extra to take home.

Black Magic was developed for red meat, while the White Magic is designed for poultry, seafood and vegetables.

Landers explained that to properly use it, one is to pour the Black Magic on, coating the steak “until it scares you that you’re going to ruin it” by using too much.

“I remember daddy closing the store at night and he’d have these big vats of seasoning,” Raybin said. “The store always had that smell, the garlic and the onion.”

He also bottled spaghetti sauce at the store.

In 1961 and 1971, he was a delegate to the White House Conference on Aging, “which was amazing for a guy who spoke broken English,” Raybin said. In 1965, President Lyndon Johnson appointed him to the Advisory Committee for Older Americans.

Being in Montgomery, Raybin said, many political figures came to the store. “He tried to push through legislation over the meat counter.”

He was also very involved in the Lurleen B. Wallace Cancer Hospital. “At one time, his name was on it,” Raybin said.

As the Hanans got older and Rubin had health issues, they made the decision to sell the store. “It was a big deal,” Raybin said.

That’s where the Landers family entered the picture. Landers said his father was a “good customer, regular customer for many years,” and bought the store with a business partner.

He bought it “with an eye on the seasoning,” Landers said.

Landers had also worked in the store during the summer when he was in high school, helping with the butchering. “We’d spend all day trimming fat off the pork tenderloins,” he said. “It was brutal.”

Those tenderloins had long been one of the most popular items at the store, he said. Rubin called them “Poor Man’s Filets.” Landers explained that the store had regular beef filets, which “were priced accordingly,” but the much less expensive pork tenderloins, wrapped in bacon and slathered in Black Magic to resemble the beef filets, “used to fly.”

Unfortunately, Landers said, before long the partners split up, and the store closed for good in the early 2000s.

Rubin died in 1996, and Julia moved to Birmingham, where most of the family was residing. She died in 2005.

But her seasoning continued. Landers explained, “My grandmother kept the seasoning part going for a few years, out of her house,” selling it at a couple of places in Montgomery.

Soon, Landers and his wife were moving from San Francisco to Pittsburgh, and he decided that he wanted to take the burden off his grandmother. He set up a toll-free number to take orders for the seasoning, and had a “pretty constant” response, with people saying “so glad I found you” and “how do I get it?”

He worked on the seasonings as a sideline to his full-time job, then in 2014 decided that “the potential has always been there.” He relaunched the company, focusing on distribution in Alabama even though he was physically in Pennsylvania.

Last year, they moved back to Birmingham. “It’s been amazing to be back here and be in the local stores, getting to know the managers and employees.”

He has also been doing demos at the stores, enjoying how customers come up and relate memories of Penny Profit and the Hanans. “Hopefully, we can honor their legacy by preserving a part of what they created. It’s pretty unbelievable that people still go crazy for these spices so many years after Julia first mixed them,” he said.

Raybin added, “It’s so exciting to walk into a Publix and see Mis’ Rubin’s seasoning on the shelf.”

Distribution continues to expand, Landers said. A list of stores where the seasoning is available throughout the region is on the website. It is available at Publix in Alabama and Mississippi, with Florida on the way; and soon it will also be carried by Rouse’s in Louisiana, Mississippi and Alabama. In Alabama, many Piggly Wiggly and Winn-Dixie locations also carry it.

It is also available at the Trey’s Produce farmer’s market outside Birmingham’s Levite Jewish Community Center.

Seasoning packages can also be ordered at the website, and there is a 25 percent discount for Southern Jewish Life readers, using the code SJLMAGIC.