From Boston to Mound Bayou: The only Jewish family in all-black Mississippi town in the 1960s 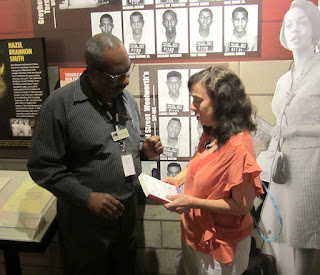 At the Mississippi Civil Rights Museum, Jo Ivester meets Hezekiah Watkins, who at age 13 was mistaken for a Freedom Rider in 1961 and was sent to Parchman Prison. An ardent civil rights worker, he was arrested over 100 times during the 1960s, and in 1962 shared a jail cell with Martin Luther King in Jackson. Photo by Maya Willis.

In early 1967, Boston pediatrician Leon Kruger asked his family where in the U.S. they would like to live. After they all chimed in, they learned the game was his way of letting them know that he was closing his practice and they would be moving to Mississippi.

More specifically, Mound Bayou, in the Mississippi Delta, in one of the poorest counties in the country. Mound Bayou is an all-black town where they would be one of only two white families, and the only Jews.

Thus began an odyssey that daughter Jo Ivester, who was 10 years old at the time, recently chronicled in her book “The Outskirts of Hope.” She recently spoke at the new Mississippi Civil Rights Museum in Jackson and at Beth Israel in Metairie.

The book is told through the eyes of Ivester’s mother, Aura, and she used her mother’s diaries extensively in writing the book, which is a window on how slow the progress in society was despite the civil rights movement’s legal victories.

In moving to Mississippi, she said, “my father became a footsoldier in the war on poverty.”

Not that it came as a surprise. “His parents were Jewish socialists in Boston,” and in the 1930s it was routine for socialist politicians visiting the area to stay with them. “What he picked up was taking care of people who needed help,” she said.

When he was in his 40s, he pursued a degree in public health, and a class speaker one day was recruiting volunteers for a clinic in Boston that was opening up to help the underserved.

When Kruger volunteered, the doctor in charge, who had volunteered in Mississippi in 1964 to take care of those working for voting rights, told Kruger what he really needed was someone to work at a clinic they were opening in Mound Bayou. He immediately volunteered, then headed home to tell his family.

The clinic, Delta Health Center, is still in Mound Bayou, and is the largest employer in the town.

Kruger headed to Mississippi in April 1967, while Ivester and her siblings finished the school year in Boston.

Before the move, Ivester’s mother traveled to Mississippi to see the town. She arrived in Memphis, where she and her husband set off from with another couple from the clinic. For the drive to Mound Bayou, she figured the men would be in the front seat so they could talk about the clinic and the wives could get to know each other while sitting in the back seat, but the other man — who was black — insisted on her sitting up front. After she repeatedly stated the chivalrous move wasn’t necessary, he finally told her that as a black man in the front seat with whites, they could all be in danger.

Though it was 1967, the Klan was still very active, and there was a sense in the region that if a black person voted or went against decades-old societal norms, “you were taking risks.”

Mound Bayou, though, was a “safe haven” with the Klan not bothering the town, unlike other towns where there were both whites and blacks, with their neighborhoods divided by the railroad.

In Mound Bayou, the Krugers moved into a trailer, as the housing stock in the town was very basic.

Ivester was entering the fifth grade. Her father warned her that the experience would be very different from Boston — “it’s going to be like you’re not in school. And he was right. I knew more math than my teacher did, at 10 years old.”

Her mother decided to become an English teacher, which she would continue doing for 25 years. The students accepted her, because they could sense that “she cared, from day one.”

During her talk, Ivester described a moral quandary shortly after she arrived, when she saw some boys playing football. Wanting to get to know other kids in the area, she asked if she could play, which turned out to be a loaded question.

On the one hand, blacks in the region were conditioned that when a white person asked for something, you put your head down and just do it. On the other hand, physical contact of any kind between the races was taboo, to the extent that on a sidewalk, if a white person approached, a black person had to immediately step into the street to avoid the possibility that they would rub shoulders, even by accident.

One of Aura’s students was stabbed in a nearby town for not getting off the sidewalk quickly enough.

The boys decided to let her play, but agreed among themselves that they would tackle her so hard, she would never want to play with them again. They didn’t know she regularly played football in Boston. The first play, she was given the ball, and even those on her own team started tackling her — but she bounced up, ready to go again.

One of the boys commented that she could really play, and that’s when she knew she had been accepted by her peers.

Though the Krugers did not hide that they were Jewish, they made a conscious decision not to be part of the nearest Jewish community, about 12 miles to the south in Cleveland. “Many in Mound Bayou weren’t comfortable with the Jewish community,” she said. While they may not have known anyone Jewish, they felt they knew about Jews, and the Krugers did not want anything to complicate the work that the clinic was doing.

Nevertheless, when they heard that Beth Israel in Jackson had been bombed by the Klan in September 1967, Kruger drove his family to Jackson so they could see what happened, and Rabbi Perry Nussbaum, whose home would be bombed that November, showed them around.

She said relations between Jews and African-Americans in the region were a “two-edged sword.” While Jews were visibly active in the civil rights movement, Jews were also merchants in towns throughout the area. In general, white stores were discriminatory, with blacks being restricted to certain hours, not being allowed to try on clothes, or having to wait as white customers were served first.

Jewish storekeepers were generally more lenient and would address African-Americans as “Mr.” and “Mrs.,” a courtesy rarely seen. “They felt they were the good guys, but the African-Americans didn’t always see it that way,” Ivester said. She added that the extension of credit, seen by storeowners as a way of helping out, was also an issue, because one doesn’t necessarily like a person they owe money to.

She added, “in many cases the Jewish shopkeepers were hanging on by their fingertips and they were targets of the KKK as well.”

Ivester’s mother decided to teach Shakespeare’s “Merchant of Venice” in the high school, from the perspective of “the tragedy of Shylock.” She started by asking the students what they knew about Jews — and many of the responses were highly negative. Nevertheless, she wrote them on the board.

Finally, she asked the students if they had forgotten that she is Jewish — and they immediately protested that they weren’t talking about her.

“Yes, you were,” she replied, and despite their pleas, refused to erase the board until the students had “earned” it after a long discussion on prejudice, centered around the quote “if you prick us, do we not bleed” and applying it to different groups.

She eventually set up a “pipeline” of students from Mound Bayou to attend Brandeis and Tufts, which endured long after the family left Mississippi.

On April 4, 1968, Martin Luther King Jr. was assassinated, two hours up the road in Memphis. “It felt personal,” she said. Everyone in Mound Bayou was grieving as if “they lost a family member,” and there had been plans in the works for King to speak in Mound Bayou.

Friends from across the country called to urge the Krugers to leave Mound Bayou immediately, citing riots that were breaking out all over the country. Instead, they set off on their normal daily routine.

When Ivester arrived at school, classmates were hugging and crying, and she was immediately embraced as well. “We were not met with hostility. We were part of the community’s grieving.”

Just by being in Mound Bayou, the Krugers were pulled into the civil rights movement, Ivester said.

But they were eventually forced to leave Mound Bayou. Mrs. Kruger ordered a wide range of books for the school, many dealing with black history and pride, books that would never be purchased by a Mississippi school system in those days.

When the packages arrived, she was instructed not to open them. Many parents were concerned that by reading the books, the teens would start to rebel against the social norms of the area, and if through increased self-pride they refused to defer to whites while in other towns, they could get killed.

A huge controversy erupted, and there was a lengthy public forum to discuss the issue, with the promise that there would be a follow-up the next week.

That follow-up meeting never came, as four teens assaulted Ivester, who was 11 at the time. A local priest advised them to keep the assault quiet and leave, that the assault was likely related to the book controversy — and that if the Klan learned that four black students had assaulted a white girl, they would burn down the town.

While the Krugers did not want to leave, they soon saw that the safety of Mound Bayou was at stake, so they planned to pack up the next day.

That evening, about a dozen of Mrs. Kruger‘s students came by to say goodbye and express appreciation for what she had taught them. When they were done, they mentioned it was time to let the next group in — much to the Krugers’ astonishment, their yard was filled with students, who came inside in groups of 10 to 15 well into the night.

The Krugers headed to Miami, where there had been riots, as they “wanted to go where the trouble was.” Then they headed to Los Angeles, where Mrs. Kruger taught at South Central.

Despite the assault — which, while doing interviews for the book, Ivester learned was a prank gone horribly wrong and not a political statement — “when I talk about Mound Bayou, I have such incredibly warm feelings about the town and its people.”

She goes around speaking to groups about her experiences because “Fifty years later, we are still dealing with many of the same problems,” and “in sharing our personal stories, we are able to raise awareness.”

She is working on a new book, “Once a Girl, Always a Boy” inspired by her transgender son.

Her Jackson talk was part of a three-day conference, “Reclaiming Our Humanity: Lessons of the Holocaust for Today,” sponsored by the New York-based Olga Lengyel Institute for Holocaust Studies and Human Rights.