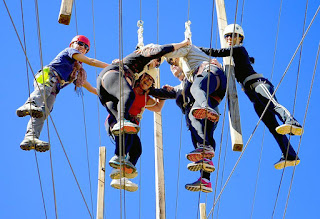 The National Leadership Center in Ariel

On the surface, the news should have been something to be celebrated after years of hard work.

On Aug. 19, Israel’s Ministry of Education announced an allocation of 1 million shekels for programs at the National Leadership Center in Ariel, a center that is supported by Birmingham-based JH Israel.

Shortly after the announcement, JH Israel found itself the focus of what JH Israel founder Heather Johnston called an “outlandish” misrepresentation.

A headline in the left-wing newspaper Ha’Aretz claimed the funds were going to an “Evangelical Bible program in West Bank Settlement,” a characterization Johnston said is inaccurate. That article, and one in Vision magazine, insinuated that the Israeli government was funding Christian missionary activities.

Ariel Mayor Eli Shaviro said the ties between JH Israel and Ariel are based on mutual respect and a commitment to leadership development. “Unlike many Christian ministries that are motivated by the prospects of exposing Jews to their belief system, JH Israel is concerned with the question of how National Leadership Center participants can become more engaged with Israel’s Jewish heritage,” he said.

Furthermore, Ariel officials pointed out that in their 20-year relationship with the Johnstons and their organization, no evangelism or proselytizing has taken place.

Eran Glazer, director of the National Leadership Center, said the center provides a “unique experiential learning environment,” and team growth “occurs through reflection on the strengths and weaknesses of Israel’s biblical leaders and how those leadership values can be applied to one’s personal life.”

The center, which has attracted over 50,000 participants since it opened in 2010, is on 142 acres and has seven large ropes climbing courses.

The Ministry of Education allocation, which is about $270,000, will fund participation in the center’s program for between 3,000 and 4,000 Israeli high school students.

Johnston pointed out they “are not pastors of a church or connected to a denomination or affiliated with a particular church.” They “facilitate a guest ranch in Northern California with a focus on leadership development and enhancing parent-teen relationships.”

In 1997, the Johnstons met Ron Nachman, who was Ariel’s founding mayor, and a deep friendship began. In her first visit to Ariel, Johnston was affected by a visit to an absorption center for Jews from the former Soviet Union, and started supporting programs in the community.

In 2006, Johnston suggested an Israeli National Leadership Center in Ariel to Nachman, who dismissed the idea. A few months later, Nachman visited the California center, climbed the ropes courses, and agreed to build the leadership center in Ariel.

Shaviro, the current mayor, said the Johnstons “approached Israel’s Ministry of Education with humility, asking only how their financial resources and leadership training experience can be of service to Israel’s youth. Their respectful stewardship of the State of Israel is a gift.”

In 2008, Ministry of Education representatives visited California to develop a curriculum for the new center, and construction started in 2009.

Johnston said JH Israel plays a “support role” for the center, working on fundraising and capital development. The center is located in Ariel and is owned by the city. The funds from the Ministry of Education are going directly to Ariel and the center, not to JH Israel.

A city of 20,000, Ariel, described as the regional hub of Samaria, has a sister city relationship with Mobile.

In February, an agreement was signed between the center and the Ministry of Education, that the center is “the only recognized provider on the subject of empowering youth in the biblical values on the basis of developing personal and team strength and leadership.”

In addition to Ha’Aretz, Vision magazine also keyed in on the “biblical” aspect, raising suspicions of Christian proselytizing, and also questioned the prospect of Christians teaching their version of Torah to Jews.

Glazer pointed out that the center’s staff is “solely Jewish,” with the Jewish staff responsible for the program’s content. “It is Jewish-led with Jewish-authored content,” and Christians aren’t even present when the programs are taught. “How could American Christians be proselytizing if indeed they are not there?”

The center has a great deal of support in Israel, with some supporters traveling to the United States on the project’s behalf. In 2012, Danny Ayalon, who was Israel’s ambassador to the U.S. from 2002 to 2006, spoke at a JH Israel fundraiser in Birmingham. In October 2013, former Israeli Ambassador Yoram Ettinger was the guest speaker at the JH Israel gala.

Glazer also pointed out that the center “operates in the broad consensus of Israeli society,” with a wide range of groups visiting.

Shaviro said “The Ariel National Leadership Center is an invaluable resource for Israel’s youth. In addition to the tens of thousands of visitors that we’ve hosted over the years, I have made it a priority to see to it that each and every one of Ariel’s school pupils participate in the experiential learning programming at the Center.”

An Education Ministry spokesperson told Ha’Aretz “The ministry runs many diverse leadership programs around the country. The leadership center in Ariel was examined by the ministry because of its uniqueness. As part of the training there, young people meet their peers from other communities and get exposed to the diversity of Israeli society.”

Johnston also heads the U.S. Israel Education Association, an educational organization which facilitates trips to Israel for Congressional Representatives and Senators. Most trips for lawmakers do not venture into the territories, the goal of the association’s trips is to expose the lawmakers to the full demographic picture, and a better understanding of Israeli and Palestinian positions in the peace process.