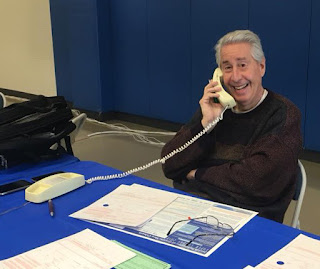 Arnie Fielkow at the Federation’s Super Sunday earlier this year

While Jewish Federation of Greater New Orleans CEO Arnie Fielkow will be battling a “rather significant health challenge” in the coming months, he said the Federation’s activities will “continue without interruption.”

In an Aug. 23 message to the community, Fielkow said he has been diagnosed with “a relatively rare blood/heart disorder.” This week, he started treatments at Vanderbilt in Nashville, and it is anticipated that after a month in Tennessee he will continue treatment in New Orleans for several months.

A second phase of treatment will likely occur next year, he added, and said “I believe the disease can be put into remission.”

“I have been in constant contact with Federation leadership since this disease came to light, and I want to thank leadership and my great staff for their help and support,” he said.

He is working remotely during the Nashville treatments, with the Federation staff taking a larger day-to-day role. Federation Chief Operating Officer Sherri Tarr served as interim executive director last year between the departure of Michael Weil and the arrival of Fielkow.

In an Aug. 19 message, Fielkow reflected on his first year heading the Federation, with the highest Annual Campaign fundraising since the storm and a 300 percent increase in external revenue. The Annual Campaign increased by $100,000, to $2.7 million.

The Federation’s Campaign Celebration, originally scheduled for October at the Mercedes-Benz Superdome, has been postponed to next spring.

Fielkow also cited “new and enhanced programming and initiatives involving social justice, multifaith, Jewish-African American relationships, Jewish education, Israel education and advocacy, and much more” toward the goal of “re-branding Federation to make it a more relevant, up-to-date fund-raising organization, serving all members of the Jewish community with programs of interest.”