Selichot in the region 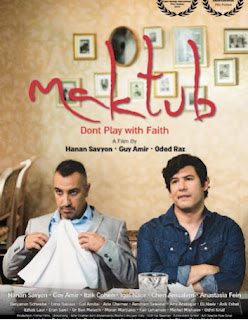 This year, Selichot, the night of reflection that ushers in the High Holy Day season, will be on Sept. 1.

Birmingham’s Temple Emanu-El will screen “The Testament” at 5:45 p.m., with Labor Day barbecue. The film is a completely different take on Holocaust films, with the Orthodox main character working for a state-sponsored Holocaust research group. While battling with Austrian officials over a housing development planned for a site where he believes a massacre of Jewish laborers took place, he comes across his mother’s secret file containing her video Holocaust testimony.

It turns out his mother wasn’t Jewish — she was abandoned by a maid and worked in a Jewish household, being raised alongside them and going along with them when the Nazis came. The revelation leads to a crisis of identity.

Emanu-El’s service will be at 8 p.m., with the introduction of a new Days of Awe composition for piano, violin and cello.

Birmingham’s Temple Beth-El will have Selichot Songs of Repentance, led by Rabbi Stephen Slater and Sarah Metzger, and a dessert reception, starting at 8:15 p.m.

Dothan’s Temple Emanu-El will have two Selichot programs at 5 p.m. For adults, there will be a brown bag dinner, followed by a short Israeli film and discussion. At the same time, the children will have a discussion of the Jewish values of kavod and b’tzelem Elohim. After those programs, the two groups will convene in the sanctuary for Havdalah, selichot and the changing of the Torah covers.

Temple B’nai Sholom in Huntsville will have Selichot in the sanctuary at 5:30 p.m.

Etz Chayim in Huntsville will have Havdalah, a movie and Selichot, starting at 8 p.m.

Springhill Avenue Temple in Mobile will have the changing of the Torah covers at 7 p.m., and Selichot at 8 p.m.

Agudath Israel-Etz Ahayem in Montgomery will have Selichot at 7:30 p.m.

Temple Beth El in Pensacola will screen “Maktub” at 7 p.m., followed by Selichot at approximately 9 p.m. The Israeli comedy is the story of two small-time gangsters who have a near-death experience, and set out to change their lives by fulfilling prayers that are left at the Western Wall.

Gemiluth Chassodim in Alexandria will have Selichot at 7:30 p.m., with refreshments afterward.

Beth Shalom in Baton Rouge will screen “Maktub” at 6 p.m. along with a dairy potluck dinner, then hold Selichot at 8 p.m.

B’nai Israel in Baton Rouge will have Selichot at 10 a.m.

Shir Chadash in Metairie will have a panel discussion based on the phrase “who shall live and who shall die” — and what happens when a person is faced with making such a decision.

The evening will begin with Ma’ariv and Havdalah at 8:30 p.m., followed by a panel with three members who have been faced with life or death decisions. Judge Miriam Waltzer was the first woman DA in Orleans Parish and the first woman elected to Orleans Parish Criminal Court. She moved to the Court of Appeals in 1992. From the bench she created innovative programs to educate juvenile offenders instead of sending them to prison.

Gregory Rich is the owner of the Avian and Exotic Animal Hospital of Louisiana and a winner of several animal health awards. He has also served multiple times as the president of the Southeast Louisiana Veterinary Association.

At 10 p.m., Elliot Finkelstein will lead the Selichot service.

Temple Sinai’s Selichot will start with a 6 p.m. dinner, followed by the service at 7:30 p.m. There will be an exclusive photo exhibit on transformation and change, with photos by Sinai members, including Ashley Merlin Gold, Max Cohen, Wendy Good and Austin Kent.

Beth Israel in Metairie will hold Selichot at 10 p.m. at Beth Israel, not at the Metairie Chabad as previously announced.

Gates of Prayer in Metairie will have a dessert reception at 8 p.m., followed by “The Music and Musings of Selichot,” at 9 p.m.

Touro Synagogue will screen “Mr. Rogers and Me,” a documentary about Fred Rogers. The viewing starts at 6 p.m., followed by dinner and discussion with Rabbi Alexis Berk. The Selichot service, “A Contemplation of Deep and Simple,” starts at 8:30 p.m.

Anshe Sfard in New Orleans will hold Selichot at 11 p.m.

Agudath Achim in Shreveport will have Havdalah and a film screening at 8 p.m., followed by a snack around 9:15 p.m. and the Selichot service.

B’nai Zion in Shreveport will screen “RBG” at 6 p.m., followed by the Selichot service.