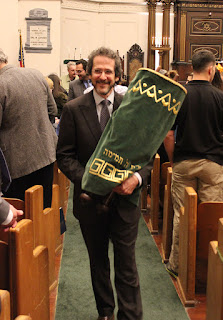 In January, Touro Synagogue placed its “mystery Torah,” which turned out to be over 200 years ago, in a display case in its historical display.
This month, the congregation is starting on the process of writing a new Torah scroll.

Chris Kornman, who is chairing the Torah project, said the congregation’s existing Torahs haven’t undergone regular maintenance and are in “various states of disrepair.” Also, many of the scrolls are “large and a bit unwieldy” for a lot of congregants to carry.

The board decided to pursue a new Torah, which would be somewhat smaller and easier to carry, and would serve as the regular scroll for use during services.

Kornman said the Good family made a “very generous donation to fund what we call our Torah project,” getting a new scroll and examining the current scrolls to assess their condition. The donation “opened the doors for us to investigate in earnest.”

They did not want to just go and purchase a Torah, but launch a project with added meaning and involvement for the congregation.

“This is a huge deal,” Kornman said. “We wanted it to be something the entire congregation would be involved with.”

For Touro, that meant being completely inclusive, involving women and non-Jews who are connected to Touro, and that “led us down the path of getting a soferet,” a female scribe, who would not be as restrictive, since most scribes are Orthodox men.

Linda Coppleson has been designing and writing custom ketubot for over 30 years, along with other artwork to commemorate life cycle events. That background enhanced her transition to becoming a scribe.

For 25 years, she taught Tanach, rabbinics and Jewish history at a Solomon Schechter school in New Jersey. She began studying to become a soferet STaM in 2003 when Eric Ray agreed to teach her.

Ray “not only agreed to teach a woman, but… also gave me the confidence to embark on this endeavor,” Coppleman said. “With him, I learned the basics of sofrut; forming the letters, studying the texts of the sofer, cutting the quill, learning recipes for ink and about the different kinds of parchment.”

She was part of the first Torah that was commissioned entirely for female scribes. In the Women’s Torah Project, which began in 2008, she wrote 20 of the 62 four-column pages for the scroll, which is now in Seattle. She was finishing her fourth Torah earlier this year.

She said being a scribe is different than being a calligrapher. “Calligraphy may give me pleasure, but sofrut gives me pleasure and inner awareness.”

A dedication celebration for the Torah project will be held on Shabbat Shuvah, with Coppleson making several presentations.

The dedication will be on Sept. 16 at 10 a.m. as Coppleson writes the first letters at the beginning of the Torah.

During the 6 p.m. service on Sept. 14, she will discuss the art of Torah writing and the sacred calling, explaining the process, time frame and regulations.

On Sept. 15, she will lead a presentation on the state of Touro’s current scrolls, where they came from, who wrote them and what their conditions are. The program will be at 1 p.m., and babysitting is available for ages 6 and under with advance reservations.

Over the coming year, Coppleson will be in New Orleans approximately four times for programs. Members will be able to have “scribing sessions” with Coppleson, holding her hand as she writes a letter or word. Families or groups can do a chain of hands.

Every Touro member is encouraged to participate in a scribing session — women, men, children, seniors, non-Jewish members. No Hebrew knowledge is needed.

“Anyone who is a Touro member can dedicate a portion of the Torah and write with her, hold her hand while she is scribing,” Kornman said. “It’s a rare opportunity for a congregation. For most people is will be a once in a lifetime event.”

Coppleson has already begun sections of the scroll, but saved the first section for the September events. The entire process will take 12 to 16 months.

Dedication opportunities are available, starting with letters at $18 and words at $30. Significant stories start at $900 and go to the receiving of the Torah at Sinai, at $7,200. The project is underwritten in memory of Julian Good, past president of Touro.