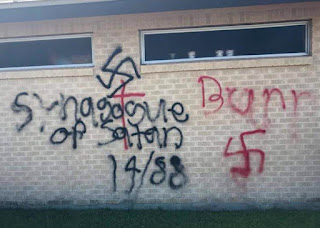 Less than a week before Rosh Hashanah, anti-Semitic graffiti was discovered on the back wall of Northshore Jewish Congregation in Mandeville, 25 miles north of New Orleans, on Wednesday.

A couple of neighbors entered the building to ask administrator Rebecca Slifkin if she was aware of what was on the outside of the building.

The spray-painted graffiti had two swastikas in red and black, a red cross, the phrase “synagogue of Satan” and the term 14/88. The congregation contacted the Mandeville Police Department, which is investigating it as a possible hate crime.

Established in 1996, the 90-family Northshore Jewish Congregation is the only synagogue on the North Shore of Lake Pontchartrain.

In a statement, Northshore’s board said this was the first time they had experienced such an act. “We know this doesn’t represent the majority in this community, but we also know there are those who harbor not only anti-Semitic but racist and homophobic views and we as a larger community must reject all forms of hate.”

On Friday, Northshore President Jeremy Shalett said a concerned community member “has taken it upon themselves to clean the building” unannounced, and they are “overwhelmed by the outpouring of support from our congregation, friends and neighbors in St. Tammany. The kind words and many offers we’ve received to help with cleanup efforts are greatly appreciated.”

A public event hosted by the congregation and other local organizations will be held on Sept. 16. “We stand together firmly against all forms of hatred and bigotry,” Shalett said. “We call on everyone in St. Tammany, regardless of religion or background, to join us in this stance and carry it forward as we look toward observing the start of the Jewish New Year.”

Jewish Federation of Greater New Orleans CEO Arnie Fielkow and Federation Board Chair Henry Miller commented jointly, “Our community remains unified in opposition to white supremacy. Hate for one is hate for all, and as such, we condemn all forms of bigotry and discrimination.”

They thanked those who have denounced the graffiti, and “call upon our Greater New Orleans community at large to do the same.”

Rabbi Gabriel Greenberg of Beth Israel in Metairie, chair of the New Orleans Clergy Council, said “The Jewish community, and all of its rabbinic and clergy leadership, stands together with our brothers and sisters at the Northshore Jewish Congregation.  We must rededicate our actions moving forward towards teshuva, tefila, u’tzedakah: repentance, crying out against injustice, and continuing to create holy and righteous communities here in southern Louisiana and the world.”

Rep. Steve Scalise issued a statement standing with the congregation. “Hatred and bigotry have no place in our society. This cowardly act of anti-Semitism is disgraceful, and I hope the criminal who perpetrated it is brought to justice.”

Tammy Savoie, who is running for Congress, said “I strongly denounce this vile expression of hatred in our community… it is shocking and repugnant and beneath any Louisiana resident any time to use a swastika in committing a crime.”

State Rep. Reid Falconer called the graffiti “a tragedy” and urged people to “think about how you can respond.”

Noting a 77 percent increase in anti-Semitic incidents nationally last year, ADL South-Central Regional Director Aaron Ahlquist said, “Hate of any kind must not be normalized, thus we hope that the entire community roundly condemns the vandalism at the Northshore Jewish Congregation. As part of that effort, ADL is offering a reward for information leading to the arrest and conviction of the perpetrator or perpetrators of this crime.”

In the 2017 Audit of Anti-Semitic Incidents compiled by ADL, Louisiana’s total jumped from three in 2016, all vandalism, to 10 in 2017, seven of which were harassment and the rest were vandalism. In March 2017, fliers and stickers were posted on the two local synagogues and at a mosque in Shreveport.

Also last March, there was anti-Semitic harassment reported in Metairie, aimed at a Shabbat service. In New Orleans, a synagogue received an anti-Semitic phone call, a swastika was posted in front of a Jewish home, a Jewish city council candidate’s signs were defaced with swastikas, and anti-Semitic content and threats were posted on social media by middle school students.