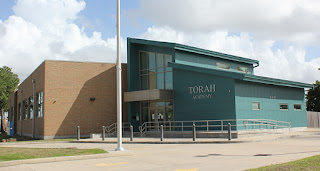 Torah Academy in Metairie made a huge step forward in its Burn the Mortgage Campaign with the announcement of a $1.8 million gift that will result in the renaming of the school.

On Sept. 13, the school will become the Joseph and Rosina Slater Torah Academy, to reflect the gift from Rosina Slater.

Rivkie Chesney, director of Hebrew Studies and Admissions, said Slater, 93, has no children, but “all the children at Torah Academy are going to be her children.”

Personally, her family has become close with Slater, who participated in the upsherin of their son, Menachem. He calls her “Auntie Rosie,” she said.
The Burn the Mortgage Campaign began in the spring of 2017 with a goal of $3.5 million by the end of 2019.

In 2014, Torah Academy moved into a 15,000 square foot facility, with most of the construction being funded by a grant received from FEMA. The facility replaced Torah Academy’s old facility on West Esplanade Avenue, which had been badly damaged by flooding after Katrina.

While 96 percent of the construction cost was covered by FEMA, the school had to borrow to cover the cost of acquiring the land, and re-establishing the school and its contents after the storm.

After the storm, many families moved away and never returned. When the school moved into the current building, there were 27 students in Pre-K to 8th grade. Now, enrollment is around 70.

The donation shows continuity for Jewish education in New Orleans, Chesney said, giving the community a “thriving, vibrant traditional Jewish school for the children of the community.”

The school’s presence is important for the community at large, and not just because the school accepts students from all segments of the community. “Families have moved to New Orleans because they knew there was a thriving Jewish day school for their kids.”

Chesney said the Slater gift is a foundation to help the school expand, and “we’re hoping this gift will lead to other significant gifts.”

The dedication will start at 5:30 p.m. There will be sushi, hors d’oeuvres and a meat carving station, and a children’s menu.

The Panorama Jazz Band will perform on the Kaufmann Patio, and The Magic YoYo will be in the Shapiro Multi-Purpose Room.

Students will also perform an original song by Nechama Kaufmann.