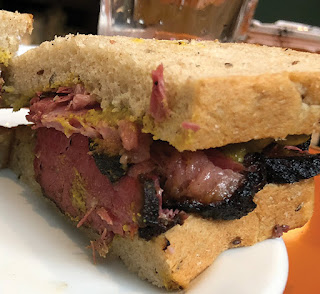 National magazines have lauded Birmingham’s burgeoning and diverse culinary scene, and this past year Birmingham’s Highlands Bar and Grill won the James Beard Award for Most Outstanding Restaurant in America.

But Adam Grusin, who worked at two of the other celebrated restaurants owned by Highlands owners Frank and Pardis Stitt, felt there was a glaring hole in Birmingham’s culinary scene. With so many great chefs and international cuisines, how could there not be a Jewish deli?

Nick Pihakis of the Jim ‘N Nick’s barbecue chain had that same thought.

In the next few weeks, the deli gap will be filled with the opening of Mile End Deli, a Montreal-style establishment located in the LIV Parkside apartments, across from Railroad Park and down the street from Regions Field, at 1701 1st Avenue South.

While Grusin grew up in Montgomery, he would often visit his grandparents, Phillip and Helen Grusin, in Birmingham, and they would go to Browdy’s, an iconic deli that closed in 2009 after almost 100 years. The deli experience “was ingrained in me in a very positive way,” he said. “They were an institution here for so many years.”

Grusin started working as a barista at age 14, “which scared the hell out of me.” It wasn’t a good fit, partly because he couldn’t remember all of the details of each drink.

During his last year of school, he worked at Bottega in Birmingham, becoming sous chef, then chef de cuisine at Chez Fonfon for 12 years. Both of those restaurants are owned by the Stitts.

Grusin learned a great deal under the leadership of the Stitts, saying they helped him grow both professionally and personally.

They “helped me gain an appreciation for food, for French food, for ingredients, relationships with people who provide ingredients, with guests.” He especially learned to appreciate the “privilege” guests grant in affecting their day when they come in for a meal.

About two years ago, he wrestled with leaving Chez Fonfon and pursuing the dream of opening a deli. He said it was not easy to leave Fonfon, as “it didn’t feel like work. You walk in and it felt like home,” he said. That is “the same atmosphere I want to create in the deli.”

He started talking with Pihakis, who also wanted to see a deli in Birmingham, and gave Grusin the opportunity to partner in the endeavor.

They made several “research and development” trips to New York, “ate all kinds of pastrami and corned beef, latkes… gorged ourselves on deli food.”

Grusin’s vision was to create a place that made fresh breads, meats cooked in-house, wood-fired bagels made in-house.

They found that Mile End Deli “was pretty close” to what they envisioned in terms of menu and atmosphere. They reached out to Mile End to get advice, and “they were great.” A month or so later, Mile End contacted them and they started talking about partnering. And “here we are today,” Grusin said.

Mile End is a Montreal-style deli, and “it’s going to be challenging for us to educate people as to what that means” and how it differs from New York deli.

Montreal deli centers on smoked meats, which are considered as Jewish there as pastrami is in New York. Smoked meat is salted and cured beef brisket that is hot smoked and steamed after curing, in a process similar to pastrami but with a different seasoning profile.

Another specialty of Montreal is poutine, a long-ridiculed dish that has become trendy in recent years. It consists of French fries covered in brown gravy and cheese curds. A deli twist adds smoked meat on top.

Mile End actually began in New York, with a small location in Brooklyn that opened in 2010. The founders grew up in Montreal, and used their grandmothers’ recipes as the foundation for their menu. They modeled the restaurant after the delis in Montreal’s Mile End neighborhood.

Co-founder Joel Tietolman used to transport Montreal-style bagels from the famous Saint Viateur Bagel Shop in Montreal weekly. Montreal bagels are smaller, sweeter and have a larger hole than New York bagels, and are baked in a wood-fired oven.

In 2012, they opened a Manhattan location.

The Montreal influences of Mile End also fit with Grusin’s appreciation for French food. He said there are many similarities between French brasseries and delis. The spirit of a deli, he said, is “yes, you can get eggs at 10 at night or a reuben at 9 in the morning.”

While Grusin and Pihakis wanted to open their first Mile End in Birmingham, when they got together with Mile End, they already had a deal worked out to open in Nashville, so “we inherited” the location at the new Fairlane Hotel.

Birmingham’s Mile End is slated to open in late October. “It’s unfortunate we’re going to miss the High Holy Days,” he said, but they are gearing up for Chanukah catering.

The biggest challenge on the menu has been the matzah ball soup. “Everybody has their childhood measure of matzah ball soup,” including the size and texture of the matzah balls, the amount of vegetables, and so forth. While there have been a couple of versions at the Nashville location, when Birmingham opens he plans to have finalized the recipe and stick with it.