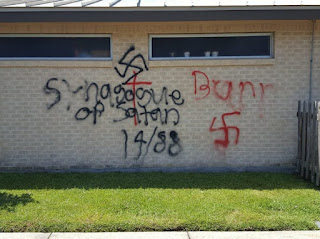 As statements of support continue to come in, the Northshore Jewish Congregation in Mandeville will hold a community gathering on Sept. 16 at 4 p.m., as a response to last week’s anti-Semitic vandalism at the synagogue.

The Sept. 16 event will be “a show of communal support to stand against hate, anti-Semitism, and prejudice of any kind.” It is open to the community and will be held at the synagogue.

Jeremy Shalett, president of Northshore, and Rabbi Alexis Pinsky, who is serving the congregation during the High Holy Days, will speak. Pinsky was asked to deliver the opening prayer at the Mandeville City Council meeting on Sept. 13.

The congregation launched a GoFundMe page with a $7,500 goal. The funds will go toward “security enhancements, building refurbishment and community education.”

The graffiti, which was discovered on the back of the building on Sept. 5, has been removed thanks to the unannounced effort of Stephen Landeche of Absolute Pressure Washing.

Landeche said he was scrolling through Facebook on Sept. 6 when he saw photos of the vandalism posted by the Slidell and Mandeville police. “This is really racist and really hateful,” he thought, and went out to his truck. He didn’t have the proper chemicals for graffiti removal, so he had to wait until the next morning, when a friend’s store opened.

He told his friend, “the Jewish center got tagged, I’m going to go and clean it off,” and his friend said “take what you need, go do it.”

Landeche had hoped to just show up and remove the graffiti without being noticed, but WWL-TV was there, setting up a camera.

He has been tickled by the “nice reaction for so many people” to his deed, especially online where “you see so much negative, hateful garbage.”

Landeche said he did not know anyone who attends Northshore, but “it made me mad” to see the vandalism. “I figure if it made me mad, it really made them mad,” and since he had the time and expertise, showing up “seemed like a no-brainer.” 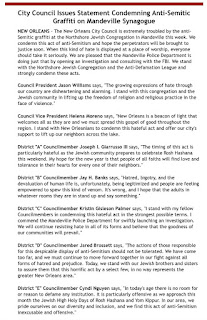 “There can be no tolerance for religious bigotry in our state or the country. We are encouraged by the community’s unified condemnation of the vandalism, especially as our Jewish friends are in the midst of celebrating Rosh Hashanah.”

The seven members of the New Orleans City Council issued a joint statement, in which each councilor made an individual comment. They said the council is “extremely troubled by the anti-Semitic graffiti,” and stands with the congregation and the ADL to “strongly condemn these acts.”

The New Orleans Human Relations Commission also issued a statement, strongly condemning the attack. “Greater New Orleans is home to one of the oldest Jewish communities in the South, and this attack, days before the celebration of Rosh Hashanah… is deeply troubling.”