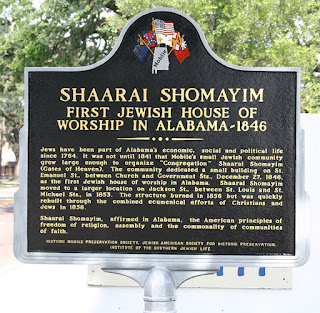 The Southern Jewish Historical Society will hold its annual convention in Alabama’s oldest Jewish community, in Mobile the weekend of Oct. 26.

The conference’s theme will be “Southern Jews, American Citizens,” with an emphasis on local stories.

The conference will begin on Oct. 26 with a bus tour of Mobile’s Jewish sites at 9 a.m.

The first panel at Spring Hill College at 11 a.m. will include Marlene Trestman, who is writing a history of the Jewish Children’s Home in New Orleans. Her presentation will be “The Ties that Bind: The Vital Relationship Between New Orleans’ Jewish Orphans’ Home and Alabama’s Jewish Communities.”

The lunch speaker will be novelist and Mobilian Roy Hoffman, who has written extensively about the Southern Jewish community, including novels “Almost Family” and “Chicken Dreaming Corn.”

During the afternoon, Josh Parshall, historian at the Goldring/Woldenberg Institute of Southern Jewish Life in Jackson, will present “Radical, Jewish and American: Southern Arbeter Ring Members as Ambivalent Citizens.”

The board of the Mobile Christian-Jewish Dialogue will give a presentation at 3:45 p.m. The Dialogue has been meeting regularly since the early 1970s.

Shabbat services will be held at 5:45 p.m. at Springhill Avenue Temple, the oldest Jewish congregation in Alabama.

A dinner will follow, with keynote speaker Jeffrey Rosen of the George Washington University Law School, “Louis Brandeis as a Southern Jew.” Tony Waldrop, president of the University of South Alabama, will also give remarks as the new Jewish and Holocaust Studies program at South Alabama is dedicated.

Oct. 27 sessions will be at the University of South Alabama, starting at 9:30 a.m.

Dana Evan Kaplan, who until this summer was rabbi at Springhill Avenue Temple, presents “Rabbi Alfred G. Moses of Mobile, Alabama and the Development of Jewish Science in the Early Twentieth Century.”

Steve Krause, will speak about “Mobile, Alabama – in the Land of the Almost Possible: Notes from a 1966 Interview with Rabbi P. Irving Bloom.” The interview is part of a book, “To Stand Aside or Stand Alone: Southern Reform Rabbis and the Civil Rights Movement.” There are 13 interviews with Reform rabbis in the region that were conducted in 1966 with the understanding that they would not be published for at least 25 years.

The 1:45 p.m. panel on “Jewish Soldiers and the American South, At Home and Abroad” includes a presentation centered on Jacob Rader Marcus, who became one of the preeminent historians of the American Jewish experience. Before shipping off to France in World War I, he spent time at Camp Sheridan in Alabama, and this presentation will explore how his experiences there informed his perspectives. Jessica Cooperman of Muhlenberg College will do the presentation.

At 4 p.m. there will be a “cultural encounter” with Judah Cohen of Indiana University Bloomington, and musical presentations by Laura Moore on piano and tenor Thomas Rowell, from the University of South Alabama. A session to meet authors follows at 5:30 p.m.

The musical presentations will center on the compositions of Joseph Bloch, and Sigmund and Jacob Schlesinger, who lived in Mobile in the 19th century. Bloch opened the first music store in Mobile and was one of the state’s first music teachers, while Sigmund Schlesinger was organist and choir leader at Springhill Avenue, then known as Sha’arai Shomayim, for 49 years. Many congregations around the country used his compositions.

On Oct. 28, sessions will be in the Admiral Hotel, with a membership meeting at 8:45 a.m. and a panel on “Patriotism and Human Rights in World War II,” including Tulane’s Marilyn Grace Miller discussing “Jewish Internees in the American South, 1942-1946,” about the detention of “enemy alien” Jewish refugees from Latin America and what happened to them after their internment at Camp Algiers in Louisiana.

Registration is $155 for members through Sept. 28, $191 for non-members. Group reservations at the Admiral Hotel are $119 per night.

Mobilians who want to attend the Shabbat dinner can make a reservation for $40, but those attending the conference and invited guests have preference for the limited space.