After the graffiti, Northshore solidarity: “This is the day that love won” 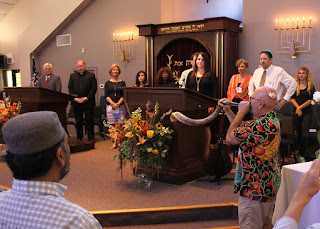 The High Holy Day season usually brings capacity crowds to synagogues, but on Sept. 16, the Northshore Jewish Congregation had a standing room only, overflow crowd the weekend between Rosh Hashanah and Yom Kippur.

An interfaith and multiracial audience heard a wide range of speakers discuss the need for demonstrating that the community stands together, after a Sept. 5 anti-Semitic graffiti attack on the Northshore’s only Jewish congregation.

Jeremy Shalett, president of Northshore, said “today that evil is being replaced by a community of people.”

He called the gathering “an amazing show of support,” saying it was “not to acknowledge the hate… this gathering is to show what this community is all about.”

The spray-painted graffiti had two swastikas in red and black, a red cross, the phrase “synagogue of Satan” and the term 14/88.

Shalett recognized 13-year-old Cager Bloom, who attended the gathering. He and his friend David Hill, 15, skateboard through the Northshore parking lot every day and first discovered the graffiti. “It was horrible someone would do that,” Bloom said afterward.

They went to his house and got his mother, and they came back to the synagogue and went inside to report the vandalism.

Rebecca Slifkin, the congregation’s administrator, was inside. Slifkin said the door is usually locked, but she had been taking things to the dumpster. Upon finding out what was outside, she contacted local police.

Many at the event spoke of turning the evil of the vandalism into an opportunity for good, compelling a wide range of races and faiths to stand up and unify.

Maureen O’Brien, who represents the area on the Parish Council, said “this is the day that love won.”

Rabbi Alexis Pinsky, who is the High Holy Days rabbi for Northshore this year, said “You never want something to happen like what occurred, but I have been blown away by the expressions of kindness and support.”

She cited the High Holy Days as a “time to repair, to build bridges” and also related the gathering to Sukkot, with the community’s support weaving a shelter.

Though the event was on the day when synagogues have memorial services at their cemeteries, a few rabbis from New Orleans were able to attend.

Rev. Jimmy Owens, executive pastor at St. Timothy United Methodist Church, said he would like to believe “such as this is a one-off event that does not reflect the hearts of our community,” but he said over the years a Jewish friend has confided in him “things that have been said along those lines.”

For this, he said, “we must repent as a community” and respect the truth that anti-Semitism exists.

Father Emile “Buddy” Noel, ecumenical and interreligious officer of the Archdiocese of New Orleans, expressed the hope for change in the soul of the person responsible for the vandalism.

Noel related how he had been invited to participate in an interfaith Seder by one of Northshore’s previous rabbis, and one of the most beautiful events in his life was holding an unrolled Torah there. “I spoke about that in a sermon, just two days before the vandalism took place.”

Noel hoped “at some point God would move the person or persons responsible… to walk in that door and learn the same things I did.”

Hamid Hussein said “when we heard the news, we were all shocked,” and he read a statement from the Council on American-Islamic Relations, condemning the graffiti.

Aaron Ahlquist, regional director of the Anti-Defamation League, told the crowd that while “voices of hate are emboldened” these days, “you are sending a powerful message that this hate will not be tolerated.”

Citing other recent anti-Semitic attacks on synagogues around the country, 17-year-old Savannah Cutliff said her congregation has been changed by the incident. “We must be the voices of reason,” she said. “We must take pride in our faith and we must speak up.”

Despite the vandalism, she said “we are not broken. Oppressors have been trying to eliminate us for 3,000 years. A few idiots with a can of spray paint don’t stand a chance.”

Because some of the congregation’s religious school students expressed fear about going to class, Ruby Bridges was brought in to speak with the children about overcoming the fear that can come in facing racism.

Bridges knows all about the topic. A 1964 painting by Norman Rockwell, “The Problem We All Live With,” depicted a 6-year-old African-American girl being escorted to school by four U.S. marshals as she integrated the New Orleans elementary schools in 1960. Bridges was that girl.

“Racism is a grown-up disease,” she said, “and we need to stop using our kids to spread it.”

Noting the title of the painting about her, she said the hate behind the vandalism “is the problem. We are still living with it.”

Teri Gross said when the congregation purchased a church building in 2002 and turned it into the current synagogue, there was a debate over whether to have a sign with the congregation’s name, as Ku Klux Klan leader David Duke lived nearby. “What’s the point of having a synagogue if you can’t put up a sign and say there is a synagogue in Northshore,” she asked.

Gross said she knew if something were to happen, the greater community would rally around the congregation. “Hateful acts do not represent this community,” she said. “You have shown this.”

Warren Montgomery, St. Tammany Parish District Attorney, said “we’re going to do everything we can to identify” the perpetrator “and prosecute that person.”

Referencing the gathering, he said “God turns bad things into good things,” and emphasized Bridges’ message to the congregation’s students, quoting Isaiah’s admonition to “be strong, fear not.”

Mandeville Police Chief Gerald Sticker said they were following every lead they receive, but graffiti is hard to track down. In this case, there were no witnesses, no surveillance footage and no spray paint cans left behind.

“We are working this as a hate crime,” he said, and will charge the perpetrator accordingly. While graffiti is usually a juvenile crime, “the specificity” in the message “leads us to believe there is some education, some indoctrination.”

Pat Brister, St. Tammany Parish president, was out of town when the vandalism occurred, and said she “would hope most people had the same revulsion I did” at the “cowardly” act.

She said it is important to demonstrate that there is no place for hate. By joining the gathering, “we send an unequivocal message that we, all of us, reject the sentiments that were scrawled so cowardly in the night on these walls.”

Covington Mayor Mike Cooper expressed “disdain for the horrific act” and said he was there “representing love and peace, and ask that we all join in.”

Rep. Reid Falconer, who represents the area in the State Legislature, spoke to the congregation during Shabbat services on Sept. 14, saying on behalf of the state of Louisiana that “you are not alone. We stand with you.”

He said elements of the state seal include a mother pelican and several chicks, with the pelican representing the state. “That mother pelican is here for all those chicks,” which he said represent “all races, all ethnicities, all religious traditions.”

O’Brien said she was “very shocked and disappointed at what we saw” because “we all feel we are better than this.”

“An attack on one faith,” Montgomery said, “is an attack on all faiths.”

Bridges said it is unfortunate that it takes events like this to bring people together, “something we should be doing a lot more.” The only thing that can “stave off evil is the love between us.”

Pastor Donald Burris of Goodwill Missionary Baptist Church said “the more we get together, the happier we’ll be.”

Looking out at the overflow crowd, Shalett said “this is everyone’s congregation today.”