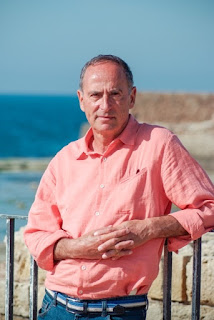 Working for a national television news department isn’t conducive to being a novel writer, but that is something longtime NBC News reporter Martin Fletcher always wanted to do.

He will visit New Orleans for an Oct. 3 program at the Uptown Jewish Community Center, to discuss his new novel, “Promised Land.” The 7 p.m. program, which is free and open to the community, kicks off this year’s Cathy and Morris Bart Jewish Cultural Arts Series.

Described by former NBC News Anchor Tom Brokaw as picking up where “Exodus” left off, “Promised Land” is the story of a love triangle that involves a woman and two brothers, set during the first 20 years of Israel’s existence.

The story begins with Peter, who at age 14 was sent to America to escape Nazi Germany. The rest of his family winds up in the death camps, and only his younger brother, Arie, survives.

When they reunite in the newly-formed Israel, Arie becomes one of the country’s richest businessmen, while Peter becomes a top Mossad agent. They also both fall in love with the same woman, a Jewish refugee from Cairo.

Many of the readers have seen him report on Israel. He was an NBC correspondent in Israel for 26 years, including 15 years as bureau chief.

He won five Emmys for his coverage, three in Israel and one each for Kosovo and Rwanda. He also was the only television reporter to join up with the Khmer Rouge in Cambodia, the only reporter to enter the American embassy in Iran when Americans were being held hostage for 444 days, and walked through the mountains of Pakistan and Afghanistan with the Mujahideen for three weeks to report on the Soviet invasion of Afghanistan.

“When you work for an American television network,” he explained, “most of what they cover is conflict, so you get sent to those places.”

He said those areas are “the most challenging places to be” and “that’s where the best stories are.” By being in those situations, he was able to relate the stories of people caught up in tragic circumstances.

He finished his first book around 1987, and then a second book a few years later, neither of which were published. “I always knew I wanted to write books, and I always wanted to write novels,” he said.

His first book was a professional memoir, “Breaking News,” which came out in 2008. When he was writing it, he considered why he went into journalism and did so many stories from dangerous locations. “I didn’t really have an answer” when he was asked that question, so he looked deeper into his experiences.

Fletcher grew up in London, the son of Holocaust survivors. His grandparents on both sides, and most of his extended family, were killed in the concentration camps. “The fact my family was murdered… left me with the feeling of wanting to tell the stories of people who can’t tell their stories.”

“As a journalist I gravitated toward stories of people who were in similar situations.” He saw echoes “all over the place” such as when he saw 50,000 refugees in a field in Kosovo.

His second book was “Walking Israel,” also non-fiction. Those books required a great deal of research. He switched to novels figuring “it’ll be easier,” but” that didn’t work out at all. It’s actually a lot harder to write fiction.”

For “Promised Land” he said “I did so much research I could have easily written a nonfiction book about Israel.” But “I didn’t want to tell the history of Israel, I wanted to tell the story.”

Novels, he added, do a better job of “transporting the reader to a time and place.”

“Promised Land” is his fourth novel. His first two, “The List” and “Jacob’s Oath” are set in Europe in the immediate aftermath of the Holocaust, while the third, “The War Correspondent,” is set in Sarajevo.

Over the years, Fletcher has done about 150 Jewish community events, and he remarked that there hasn’t been a single event where he was not asked about the media’s relation to Israel. “It has never not come up.”

At first, the complaint was that the media spend too much time covering Israel, but today, Fletcher said, the question is “why don’t you cover Israel more.”

Fletcher does believe the media is biased against Israel, but not out of anti-Semitism. For the most part, the Palestinians do a much better job of presenting their case, and the Palestinian narrative “is easier to make to an uninformed audience than the Israeli case.”

Fletcher has 30 years of experience reporting from Israel, has lived in Israel for 35 years, his wife is Israeli and their children were born there. ”Obviously, I’m on the Israeli side,” and while he did not want that to be evident in his reporting, “I’m quite happy if it comes out in my writing” of novels.

A book signing and question-and-answer session follows the Oct. 3 talk.