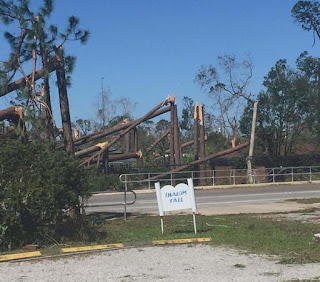 Outside B’nai Israel in Panama City. Photo by Adam Braun.

Like their neighbors, Jewish communities along the Florida panhandle are assessing the widespread damage from Hurricane Michael, which came ashore just east of Panama City on Oct. 10 as one of the most powerful hurricanes to hit the United States.

Sustained winds of 155 miles per hour categorized the storm just below Category 5, the highest for hurricanes. By comparison, Hurricane Katrina was Category 3 when it hit in 2005.

Lisa Rahn of B’nai Israel in Panama City said communication in the area has been “so limited within Bay County that we don’t know much about individual needs yet. The devastation to the community at large is unfathomable.”

B’nai Israel congregant Adam Braun made his way to the building for the small Reform congregation, and found minor damage on the exterior. “She’s okay!” he reported. “There’s a tiny bit of outside damage and the Star of David above the door is gone, but other than that, she made it through the storm.”

Achdut Israel, a small Israeli Orthodox congregation in Panama City Beach, started a fundraising page for relief efforts. Cristina Mor, who started the page, said “our community didn’t sustain major damages, all the funds will go into providing all the needs to the people in need from all over the Panhandle that suffered tremendous loss.”

Experiencing his first hurricane was Rabbi Mendel Danow, who arrived in Pensacola on Oct. 7 with his wife to start the new Chabad of Pensacola. They immediately went into hurricane preparation mode, boarding their doors and windows and purchasing supplies — while welcoming the Tenenboims, who had evacuated from Destin, where they run Emerald Coast Chabad. Destin is half-way between Pensacola and Panama City.

While Pensacola had wind and rain, being 120 miles west of landfall there was little damage.

After the storm, Rabbi Shaya Tenenboim said “Destin is fine, thank G-d.” He, his wife and 12-year-old daughter then headed to Panama City on Oct. 11 to deliver kosher meals, water, ice and gas, then prepared Shabbat meals for those still without electricity. 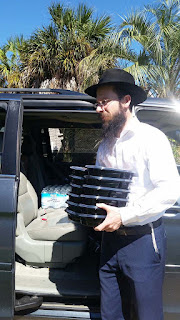 Tenenboim said most of the Jewish people they knew in Panama City evacuated. From those who stayed, he said, there wasn’t much damage to homes, but many stores owned by Israelis in the area were “heavily damaged.”

A woman who evacuated to Mississippi contacted Tenenboim as her 12-year-old daughter, a student at Emerald Coast Chabad’s religious school, had stayed behind with her father in the Panama City area, and she had not heard from them. Tenenboim contacted rescuers who “had to cut through six miles of broken trees and debris” to get to them and find them “unhurt but terrified.”

A Jewish doctor stayed at the Bay Medical Center with his wife and baby, and described “chaos and horror” as the hurricane heavily damaged the hospital. Tenenboim said they were evacuating the hospital after the storm, and “it’s an open miracle no one was hurt.”

In Tallahassee, where winds that were sustained at 70 miles per hour toppled trees and caused widespread damage and power outages, Chabad of the Panhandle grilled up chicken for anyone who came by, of any faith. Rabbi Shneur Zalman Oreichman said the Chabad House, which was being renovated, and his house had some damage, but they had been unable to assess how much due to power outages. 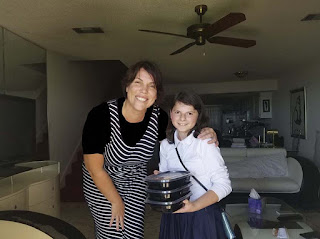 Tallahassee’s Temple Israel reported that the power was out at their building, but the structure was fine aside from some debris outside. Shabbat services would go on by candlelight and flashlight, including what will be a very memorable Bar Mitzvah for Michael Rubin.

Shomrei Torah, the Conservative congregation in Tallahassee, reported that their building was intact and the Torahs, which had been removed for safekeeping, were back in the ark. A volunteer with a chainsaw cleared fallen oak limbs from the driveway, and a water oak fell and damaged the Herzl’s cypress on the property.

On Oct 7, when warnings about the storm began, the Men’s Club took down the congregation’s sukkah in about 25 minutes, and commented on it as a “reminder of the impermanence of temporary structures.”

Power was out at Temple Emanu-El in Dothan, and there were “lots of trees and limbs down” according to Stephanie Butler, executive director of Jewish Community Services of Dothan. Otherwise, she said, everything was fine.

In Fort Walton, just west of Destin, Beth Shalom reported that “everyone is fine and so is the temple,” which is a couple of miles inland. “We really dodged a bullet this time, could have been much worse,” said Stephanie Geleta, administrative assistant at the city’s sole Jewish congregation.

NECHAMA Jewish Response to Disaster was already working in the Carolinas in the aftermath of Hurricane Florence. On Thursday, they reported “the NECHAMA Team in Horry County, S.C. felt the effects of Hurricane Michael yesterday with high winds and rain. They are back up and running today, continuing to help homeowners impacted by Hurricane Florence.”

Noting that Michael was still a hurricane over 200 miles inland in Georgia, Executive Director David Kaplan said a team would be traveling to Georgia to meet with officials and partners to see how NECHAMA can help.

The Jewish Federations of North America was already fundraising for Hurricane Florence relief, and added Hurricane Michael to the appeal, to “make sure that the urgent needs of the most severely impacted are met.”

The Jewish Federation of Greater New Orleans encouraged donations to the appeal. “In 2005, they were there for us. Let’s continue to help those in need.”