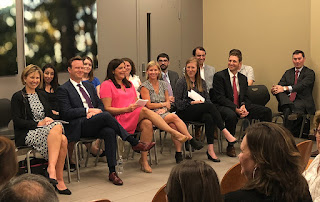 The proposal was developed by a 14-member “Next Gen” group of under-40 board members from local Jewish agencies. The group, which was organized in January, met every other week with facilitation by community planning professional Lakey Boyd.

The group started with identifying the purpose of the plan, which is “to serve, grow and sustain a cohesive Birmingham Jewish community.”

The report calls on greater cooperation and collaboration among agencies and congregations, streamlining and sharing duplicated resources, and hiring a CEO to head “Jewish Birmingham United,” the current working title for a structure that would unify local agencies. Greater community-wide interaction was also a priority, including unifying religious education offerings for all ages, and specifically for children in different segments of the community to get to know each other.

Representatives of the six local Jewish agencies and four synagogues, including current rabbinic and cantorial leadership for all four, attended the presentation at the N.E. Miles Jewish Day School. Over the next few weeks, the group has asked to speak to each of the 10 boards and invite them to be part of the process. Those meetings began the morning of Oct. 16 with the Birmingham Jewish Foundation board.

Each organization is being asked to appoint two lay representatives and one professional to a joint committee of organizations, to coordinate the next steps, including the specifics for hiring a community CEO.

The joint committee will be headed by Donald Hess and Jesse Unkenholz. Unkenholz was co-chair of the Next Gen board, along with Robin Bromberg.

That CEO search is envisioned for early 2019, with implementation of JBU in coordination with the joint committee and participating organizations, led by the new CEO, starting next summer. The united group would then be formalized by the end of 2019.

The concept of a CEO overseeing the effort is part of the desire to eliminate “siloed” and “duplicative” efforts in the community, updating the organizational structure to serve the needs of today, in a time of limited resources and donor fatigue.

The CEO is seen as being a “dynamic, engaging leader” to unify the community and “be a champion for Jewish Birmingham United,” Boyd said.

In all, Boyd said, there are 380 full-time and part-time employees at the 10 organizations, and a little over 170 board seats.

Each agency would retain its own identity under the United plan. The goal is to free directors of each organization to focus on their respective organization’s core mission, while the United office handles general operations.

In early 2016, a survey was done to determine the size of Birmingham’s Jewish community. While the official figure had hovered around 5,200 for many years, the study came back with an estimate of 6,300 in 2,600 households.

A year ago, a survey was sent to those in the Jewish community who are age 45 or younger, to get a better sense of desires and priorities. About 200 responses were received. The study showed low synagogue attendance, but a desire for “a cohesive community” socializing beyond denominational lines and synagogue membership, and greater social justice opportunities. Among those responding to the survey, 93 percent contribute to at least one of the 10 local organizations.

Boyd said this year’s report used a lot of information from that study.

A financial analysis of the organizations was conducted during the summer, which stated that in the short term, the community is operating in the red, with nearly all organizations operating at a loss or just breaking even. That position is “unsustainable in the long term.”

Conversely, the long-term position is seen as positive, with “substantial assets” in the community, including approximately $50 million in endowments, $30 million in additional planned bequests, and real estate assets between $20 million and $40 million.

Among the assets is the Levite Jewish Community Center site, which is being recommended as the Jewish community campus, unifying all six agencies. Four of the six agencies are already housed there — the JCC, Birmingham Jewish Federation, Birmingham Jewish Foundation and Day School. Collat Jewish Family Services is located nearby, and the Birmingham Holocaust Education Center is on Arlington Avenue.

While in 1993 there was an effort to move the LJCC over the mountain, this report recommends maintaining the current site as centrally located, with plenty of land for development, and neighborhood revitalization of areas to the east and toward downtown.

The report recommends “significant facility improvements” to the LJCC, to make it market competitive, and coming up with creative uses for additional revenue streams.

While there is no anticipation that any of the four congregations would relocate to the campus, the report recommends opportunities for the congregations to have a presence on the campus for some of their programs and events.

A major emphasis in the report is keeping Judaism at the core and center of every organization, to bolster Jewish life and to be an educational resource for the community at large.

To foster a welcoming community, there are several areas of emphasis — hospitality outreach to newcomers and transplants, reaching out to include those who are not members of any particular organization in programming, serving the needs of interfaith families, engaging in more hands-on social justice programs in the greater community, professional networking to build connections and recruit newcomers, and create ways for multiple generations to work together.

Lisa Engel said the presentation is a “starting point and recommendations.”

“Never have I been more proud of our Jewish community than I am at this moment,” Sher said, for getting together across all community lines “to figure out what the future of our community looks like.”

He said it was particularly rewarding to see the under-40 generation take the lead in this process. “We have great young leadership,” he said.

Bromberg, who grew up at Temple Beth Or in Montgomery, said when she saw Sher at a Federation board meeting, “I knew this was something I wanted to be involved with.”

Hess said the group that produced the proposal “has no authority” to implement it. That rests with the congregations and agencies.

He likened the proposal to a bus heading down the road. “We’re going to ask you to join us on the bus” and stay on the bus, “as difficult as the ride might be.”

There were no questions fielded at the Oct. 15 meeting. Hess explained that “you have more questions than we have answers right now,” but the board presentations would be the forum for questions and concerns. “We will be good listeners, we will be honest brokers,” he said.

Boyd said the proposal “is aggressive, and this is on purpose,” to “set expectations high.” She said there is a sense that community members will be patient as the process unfolds as long as they feel progress is being made.

Several of the Next Gen members spoke about their views of the proposal, and the need to strengthen the community that their children will grow up in.

Brooke Kaplan said “we’re all in,” and related the process to the recent acquisition of her family business, Schaeffer Eye Center by MyEyeDr. Maintaining the local identity of Schaeffer was very important to her, and similarly, “the agencies will not lose their identities” through the United effort. “Everyone can focus on what they do best.”

Other members related how much those institutions have meant to them. Alyssa Blair said her grandfather started biddy basketball at the LJCC, and with her kids as fourth-generation JCC members, “the JCC is my family’s Jewish home.”

Carlie Stein spoke in similar terms of the Day School, the LJCC and how “each and every Temple and agency has played an important role in my life.”

Boyd said “there is still a lot that has to be sorted through,” but there is an overwhelming sense that there has been a lot of talk, and now “there has to be action. We can not keep talking about this.”