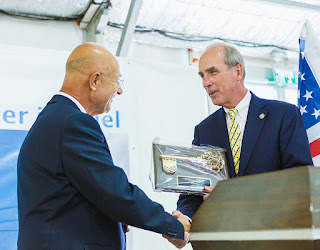 Oct. 16 was a historic day in Ariel, and Birmingham-based JH Israel was in the middle of it.

David Friedman, the United States ambassador to Israel, made an official visit to Ariel, breaking a longstanding taboo on official visits to areas in the territories, beyond the pre-1967 Green Line. He attended a regional business forum at the Ariel Pioneers Museum, held to promote joint economic initiatives for Arab and Jewish communities. The forum was organized by the Judea and Samaria Chamber of Commerce and Industry, which promotes commercial partnerships between Israelis and Palestinians in the territories.

That same day, Mobile Mayor Sandy Stimpson made his first visit to Ariel. Ariel is Mobile’s sister city in Israel.

Stimpson’s visit began with a breakfast meeting with Ariel department heads, followed by a visit to Ariel University to discuss potential academic partnerships. He then attended Friedman’s talk.

Friedman’s address was at the Ariel National Center for Leadership Development, speaking to an international audience that included American business leaders on tour with JH Israel and the US-Israel Education Association.

Avi Zimmerman, a co-founder of the chamber, said the chamber thanks Friedman “for the unambiguous encouragement that he’s given our Palestinian and Israeli business partners to continue to pursue the economic path to progress, prosperity and dignity.”

She added, “We believe these partnerships are critical for fostering an atmosphere of peace in an otherwise turbulent part of the world. We are working tirelessly to see that these efforts continue.”

After the meeting, Friedman tweeted that the business leaders he met with were “ready, willing and able to advance joint opportunity and peaceful coexistence. People want peace and we are ready to help! Is the Palestinian leadership listening?”

The meeting took place against the backdrop of an Oct. 7 terror attack in the nearby Barkan Industrial Park, where a Palestinian killed two Israeli co-workers. ”Tens of thousands of Palestinians work with tens of thousands of Israelis day in and day out across Judea and Samaria,” Zimmerman said. “Last week’s horrific terror attack in Barkan is the exception to the rule.”

After Friedman’s address, there was a luncheon where Stimpson was presented a key to Ariel, and he presented Shaviro with a clock engraved with the words “it’s time.”