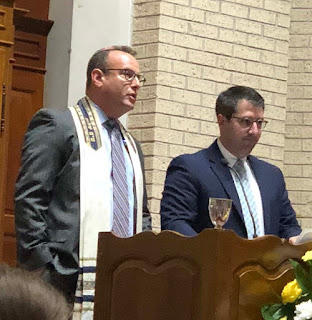 On Oct. 24, New Orleans Temple Sinai President Robin Giarrusso informed the congregation that Rabbi Matthew Reimer had requested that his contract not be renewed next summer

The announcement comes two weeks after Beth Israel in Metairie announced that Rabbi Gabe Greenberg requested that his contract not be renewed next summer.

Reimer’s contract runs through June 30. “Though we have had an exciting, productive and energetic two years together,” Giarrusso said, “the Reimers miss living near their family.”

Reimer arrived in New Orleans in the summer of 2016 to succeed Rabbi Edward Paul Cohn, who had served Temple Sinai since 1987. A native of West Orange, N.J., he had been rabbi at the Shul of New York before moving to New Orleans, and had previously held other positions in the New York area.

Reimer has also worked on community outreach through Passover seders for young professionals and the LGBTQ+ community, and the Temple Sinai Cares Committee, and deepened interfaith ties with churches on St. Charles Avenue.

The congregation has been in touch with the Central Committee of American Rabbis to organize a search for a successor.

Giarrusso concluded that “though this is difficult news to deliver, it comes at a time of great positive change for the Temple,” with the recent addition of new Executive Director Liz Yager and Director of Education Avital Ostfield. “The right senior rabbi is critical for our Temple, and we are confident that we will find the right fit,” Giarrusso said.