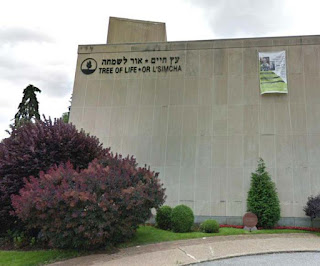 Tree of Life in Pittsburgh

This morning’s attack on a Shabbat service at Tree of Life in Pittsburgh reverberated throughout the region.

According to reports, 46-year-old Robert Bowers entered the building this morning, shouted “All these Jews need to die” and opened fire, killing 11 and wounding six, including four police officers. He was taken into custody.

A social media page of his, which has been taken down, was filled with anti-Semitic rantings. One of his online targets was HIAS, which he said is bringing in immigrants “that kill our people” and “I can’t sit by and watch my people get slaughtered. Screw your optics, I’m going in.”

He also had numerous anti-Trump posts, claiming that the president is the puppet of Jews.

Congregations throughout the South sent out expressions of shock at the attack, with many discussing current security procedures and vowing to re-evaluate them in the light of today’s events.

In many cases, law enforcement also stepped up vigilance and congregations consulted with their local agencies.

Charlie Steinmetz, president of Zeta Beta Tau, a Jewish fraternity at the University of Alabama, said he had been contacted by the Interfraternity Council and the university administration to let him know the campus “is taking proactive measures to protect Jewish students,” including increased patrols of all local Jewish institutions by the university police department.

Tory May, cantorial soloist at Gates of Prayer in Metairie, said after services this morning she emerged to see police cars parked in front of and behind their building.

Gates of Prayer posted “when one Jew hurts, we all hurt. When one Jewish community is attacked, we are all attacked.”

The social media post also noted that synagogues around the country will spend the coming days “trying to figure out the best ways to ensure the safety of our members,” and praying for an America “where people of all faiths can worship in peace.”

“This despicable act of hate and violence has shattered the sanctity of the Sabbath and the congregation of Or L’Simcha (Tree of Life) will be forever changed.  With the emboldened voices of hate being heard throughout society, the possibility of people acting out on that hate increases.  We must do everything in our power to combat hate and extremism so that acts of violence like this do not become normalized,” said Aaron Ahlquist, regional director of ADL’s South Central Region.

Jewish Federation of Greater New Orleans CEO Arnie Fielkow added, “Shabbat is a time for peaceful worship. This morning should have been a joyful time, as congregants gathered for the bris of an infant. Instead, that moment was tragically shattered, transformed into a scene of terror and grief. We can and must do better. Together we must drown out hate with love.”

Cait Gladow, communications and marketing director for the New Orleans Federation, said “This is the first time in my 10.5 years at the Federation that we’ve broken the sanctity of Shabbat to release a statement. But it’s important that we do so.”

Samantha Dubrinsky, interim executive director of the Levite Jewish Community Center in Birmingham and Director of Community Impact for the Birmingham Jewish Federation, said “This horrific attack against Jewish people in Pittsburgh will not deter the LJCC and BJF in any way. In fact, it will strengthen the resolve of our two agencies to be welcoming of people of all faiths and doing all we can to build a better Birmingham, every day, for all of our citizens.”

Southern Jewish Life columnist Doug Brook, who writes “Rear Pew Mirror,” is a graduate of Carnegie Mellon University, where students were warned to shelter in place during the shooting. During his time as a student, he worked at Tree of Life.

Rabbi Jeff Kurtz-Lendner of Beth Israel in Jackson said “The idea that Jews can’t go into a synagogue to worship here in America without a risk of being the target of violence is overwhelming. Today’s events are a day that we have been dreading, and unfortunately, our fears have been realized.”

At the Southern Jewish Historical Society annual conference, held this weekend in Mobile, there were many gasps in the room as an announcement was made following the first panel of the day.

Rabbi Deborah Silver of Shir Chadash in Metairie, the Conservative congregation for the New Orleans area, said she contacted her predecessor, Rabbi Ethan Linden, who left Shir Chadash in 2016. He is originally from Pittsburgh and grew up at Tree of Life, and reported that his family was not affected.

In a Facebook post, Linden cited the instructions of Pittsburgh’s Mr. Rogers, who said to always look for the helpers.

“I spoke to my friends in Pittsburgh tonight after Shabbat ended,” he said. “They told me that many friends walking home from synagogues all over our neighborhood had experienced something amazing: people stopping their cars, rolling down their windows and offering condolences and blessings and words of comfort. ‘God bless,’ they heard, over and over again.”

Silver also told her congregants “I take some comfort from the fact that after Shabbat my phone was filled with texts from my colleagues from other faith communities here in New Orleans. Our brothers and sisters share our shock and our pain and are reaching out to us. We are not alone.”

Gemiluth Chassodim in Alexandria, La., announced it will hold a prayer service for victims of the Pittsburgh shooting, Oct. 28 at 11:30 a.m., followed by a meeting to discuss security measures.

At the heart of the Christian Zionist movement is a commitment to stand up against anti-Semitism and stand arm-in-arm with the Jewish people whenever they are attacked. Some of Israel’s most ardent Christian supporters made comments and issued statements condemning the attack.

One of the first to comment was Pastor Robert Somerville, executive director of Awareness Ministry in Huntsville and a strong supporter of Israel.

“Just wanted you to know that we are in prayer for your Jewish community in Pittsburgh,” he wrote in an email to Jewish friends. “Unfortunately, the graciousness of the Jewish community often leaves you vulnerable.”

“I’ll not accept it if there is any suggestions that this is simply random, or does not have some anti-Semitic elements woven into it,” he added.

A statement was released nationally by Pastor John Hagee, founder and chairman of Christians United for Israel, an educational and advocacy group with 4.5 million members.

“With hearts full of grief, we stand with our Jewish brothers and sisters all across America today as we mourn the murder of members of Pittsburgh’s Jewish community,” said Hagee.

“Words cannot sufficiently convey the depth of our heartbreak upon learning a man fueled by vile anti-Semitic hatred burst into a sacred place of worship and attacked families as they prayed, leading to the death of 11 people and injuring multiple others,” he added.

Birmingham’s Heather Johnston, director of JH Israel and the U.S.-Israel Education Association, and one of Israel’s most dedicated Christian supporters, wrote this to her Jewish friends: “Our dear loved ones! We are horrified and saddened by the senseless murders that took place today at the Tree of Life Synagogue in Pittsburgh.”

Added Johnston, “It’s so pitiful that the pernicious spirit of anti-Semitism lives on after so much exposure and education in our generation. It’s really hard to believe that we still live with this.”

“Please know our prayers are with you, our Jewish brothers and sisters in Pittsburgh, and everywhere,” she added.

Comments also came from retired General Charles Krulak, a former Commandant of the Marine Corps and member of the Joint Chiefs of Staff.

Krulak, also a former president of Birmingham-Southern College and another one of Israel’s influential Christian supporters, wrote, “Words cannot express the sadness I feel over the tragic, senseless events that occurred in Pittsburgh.  I am literally ill over the fact that our world continues to be infested with individuals who live lives of prejudice and hatred.”

“Having visited Yad Vashem (Israel’s memorial to the Holocaust) just last week, this latest atrocity and manifestation of anti-Semitism is too raw to even articulate,” added Krulak.

The Pittsburgh synagogue tragedy is expected to be a focal point of a previously-planned gathering in Huntsville on Oct. 28, which has been organized by Christian leaders to express their solidarity with Israel and the Jewish community.

The Alabama Celebrates Israel event will be at 5 p.m. at The Rock Family Worship Center.

“In this moment of such deep grief and heartbreak, know we love you, we weep with you, and we stand with you,” John Buhler, one of the organizers of the Sunday night gathering, wrote in an email.

“In the face of such vicious hatred, anti-Semitism and atrocity, know you are not alone,” he added. “There are multitudes who sincerely seek the welfare of the Jewish people, and are determined to walk with you — whatever it takes, however long it takes.”