Standing together: Vigils for Pittsburgh begin across the region 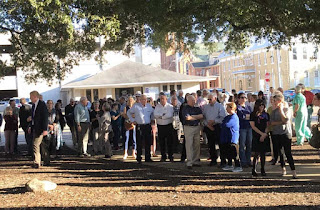 Gathering to remember the victims of the Tree of Life shooting, at the Alexandria, La., Holocaust memorial

Jewish communities around the region have been joined by their neighbors in holding vigils and community gatherings following the murder of 11 members of Tree of Life in Pittsburgh during Shabbat morning services.

In communities where there are Conservative congregations, the events have generally been planned there, as Tree of Life is part of the Conservative movement.

The American Jewish Committee is calling on Jewish communities across the country to #ShowUpForShabbat, flooding their congregations with worshipers in response to this past weekend’s tragic event.

The Cajun Navy has offered to help protect synagogues in New Orleans, Baton Rouge and Lafayette.

The New Orleans Jewish community agencies are working on a multi-faith unity event, but there was a vigil held on Oct. 28.

The Shir Chadash sanctuary in Metairie was filled with members of the Jewish and general communities, along with members of the New Orleans City Council and U.S. Rep. Steve Scalise, who was shot last year in an attack on Republican congressmen at a baseball practice.

Representatives from other New Orleans-area synagogues also spoke, with the event concluding with the Kaddish and “Oseh Shalom.” Those in attendance were invited to place memorial stones on the steps of the pulpit, then depart the event in a single-file line.

Chattanooga’s vigil, at the Jewish Cultural Center, filled the auditorium and lobby, with others outside who could not get in.

Over 500 filled the sanctuary at Beth Shalom in Baton Rouge for an Oct. 29 vigil.

Baton Rouge Mayor-President Sharon Weston Broome said she hopes their memories can be a blessing for all who work for unity and peace. “We as a community share your loss and grief because of the single garment of destiny that binds us together,” she said.

Beth Shalom Rabbi Natan Trief spoke of the “age old quest” for love to defeat hate, emphasizing the power of gatherings like that service. Rev. Robin McCullough-Bade, executive director of the Interfaith Foundation of Greater Baton Rouge, also spoke of the power of love to fight hate.

Eleven memorial candles were lit, and Rabbi Jordan Goldson of B’nai Israel recited the names of the 11 victims as an introduction to the Kaddish.

Gemiluth Chassodim in Alexandria held a vigil at the Alexandria Holocaust Memorial on Oct. 29.

Hundreds also filled the sanctuary at B’nai Israel in Little Rock on Oct. 29. At one point, all clergy, elected officials and candidates in attendance were called to come up to the pulpit. Rabbi Barry Block said he had planned to introduce all of them, but Governor Asa Hutchinson dissuaded him, as about 80 people were up there.

“This level of support is not taken for granted,” Block said. “We are a very blessed community.”

Etz Chayim in Bentonville, Ark., held a vigil and service of remembrance at Waterway on Oct. 29. Cantor Sam Radwine told the congregation in an email that in the political realm, “we want to point fingers and call out our perceived enemies. Unfortunately, that has been the tone of recent conversations and perhaps will continue for the foreseeable future.”

But there is also the spiritual realm, which “demands the coming together of each of us as the whole House of Israel. This is the place where we have the potential to express our grief, find comfort in one another’s presence, and stand together as a people who in our solidarity will fulfill the commandment of ‘Never Again’.”

The sanctuary was full for a memorial service at Temple Shalom in Fayetteville, Ark., on Oct. 28.

Beth Israel in Jackson held a community service of healing and prayer on Oct. 29 at the Holocaust memorial behind their building. B’nai Israel in Tupelo held a remembrance on Oct. 28.

In Huntsville, a previously-scheduled Night to Honor Israel at The Rock Family Worship Center on Oct. 28, where local Christians expressed support of Israel and the Jewish community, also included a moment of silence and tributes of solidarity for Pittsburgh.

About 600 Christians attended the event and welcomed around 40 members of the local Jewish community, as the speakers vowed to always stand with the Jewish people against any adversary.

Rabbi Steven Jacobs of Temple Emanu-El in Tuscaloosa wrote that almost immediately after the shooting, he received an email of support from a Baptist pastor in Pickens County, an area of the state that has no Jewish presence, despite one of the larger towns being named Reform.

“Birmingham Stands with Pittsburgh: A Prayer Gathering for Shalom” will be on the steps of Temple Beth-El on Oct. 30 at 6:30 p.m.

Birmingham Mayor Randall Woodfin said Birmingham is “especially attuned to the pain now reverberating through Pittsburgh,” as the 1963 bombing of 16th Street Baptist Church, where four girls were killed, was an act of horror but also “the realization that the time for constructive engagement and positive change was nigh.”

“In this trying time, Birmingham’s Jewish community continues to have my full support, along with my heartfelt prayers and my undying admiration and appreciation,” Woodfin said.

Dothan will have a Community Shabbat for Peace, Nov. 2 at 7 p.m. at Temple Emanu-El. The evening will include worship, fellowship, and prayers for peace, remembrance and healing. Emanu-El Student Rabbi Taylor Poslosky and Reverend Lynn Smilie Nesbitt of First United Methodist Church will offer messages of unity and peace.

In Florence, there will be prayers for Pittsburgh at B’nai Israel’s 7 p.m. service on Nov. 9. At 3 p.m., the congregation will dedicate an historical marker, followed by an open house. The congregation reported that numerous flower arrangements had been delivered there over the course of the week.

Temple B’nai Sholom in Huntsville will hold a 30-minute prayer vigil on the front steps on Nov. 2 at 6 p.m. Those in attendance are asked to bring a candle if possible. All are then invited to the 7 p.m. Shabbat service.

Beth Shalom is joining with other faith-based organizations in Fort Walton Beach for a prayer vigil, Nov. 2 at 5 p.m. at The Landing. Afterward, at 6:30 p.m., Student Rabbi Annalisa Stryer will lead Shabbat services.

The Pensacola community will have a Service of Solidarity and Healing on Oct. 30 at 5:30 p.m. at Temple Beth El.

Temple Shalom in Lafayette will have an interfaith memorial service as part of their 7 p.m. Shabbat service on Nov. 2. Faith leaders of every denomination and community leaders have been invited.

B’nai Israel in Monroe will have a memorial service as part of the 6 p.m. Shabbat service on Nov. 2. Mike Rhymes will be leading the services and religious leaders in the community have been invited to attend the services to show their support of the Jewish community.

Beth Israel in Gulfport and Chabad of Southern Mississippi will hold a Night of Unity program, Oct. 30 at 7 p.m. at the Barksdale Pavilion at Jones Park.

Hillel at Mississippi State University is holding a candlelight vigil in the Chapel of Memories, Oct. 31 at 6:30 p.m.

B’nai Israel in Hattiesburg is inviting the greater community to join in a Shabbat remembrance service, Nov. 2 at 6 p.m. B’nai Israel President Neil Solomon is originally from Pittsburgh and lived near Tree of Life.