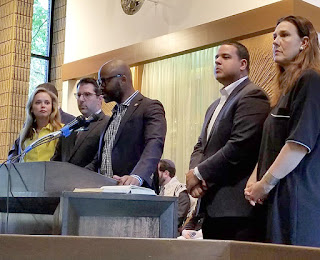 Members of the New Orleans City Council spoke at the Shir Chadash remembrance on Oct. 28

One day after 11 Jews were murdered during Shabbat services at Tree of Life in Pittsburgh, an overflow crowd filled the sanctuary and social hall of Shir Chadash in Metairie for a community vigil.

Members of the general community joined with representatives of every branch of the local Jewish community in the Oct. 28 memorial service, which concluded with the placing of hundreds of stones on the steps of the pulpit, reminiscent of the practice at Jewish cemeteries.

Shir Chadash, like Tree of Life in Pittsburgh, is a Conservative congregation. Shir Chadash President Julie Finger said “it is tremendously touching to see such an outpouring of support from the greater New Orleans community,” with over 500 in attendance for the quickly-called event.

She continued, “let us show the world at large that love will always be greater than hate, that good can and will triumph over evil, and let their memory be for a blessing.”

Rabbi Alexis Berk of Touro Synagogue cited a Talmudic story where one is to leave space in one’s stomach so if one becomes angry, he or she does not feel distressed. “I just feel really angry right now,” Berk said. “Angry that we are gathered again as citizens and members of communities that mourn and grieve atrocities at the human hand.”

Citing a quote that anger is the deepest form of compassion, she said the anger should be used “that we may be the change we need to see in our world.”

Beth Israel Rabbi Gabe Greenberg led the El Malei Rachamim, reciting the 11 names. He said usually when it is recited graveside, it is for a peaceful transition for the departed from this world to the next, but in this circumstance, “I struggle.” He also urged those in attendance to focus on the 11 and consider what to do upon waking up tomorrow, to help prevent such attacks in the future.

Rabbi Matt Reimer of Temple Sinai referenced a favorite saying of Mr. Rogers, whose real-life neighborhood was in Pittsburgh. In bad situations, “always look for the helpers,” he reminded.

Reimer led an English Kaddish that was written to be recited after gun violence, then led the crowd in Kaddish in Hebrew.

Rabbi Yossi Nemes from Chabad of Metairie said everyone in the Jewish community can identify with those who were lost. “All of us have that bubbe that has been sitting in the front row for 50, 60, 70 years.”

He added, “There is a lot of work we have to do in the days ahead… both practical and spiritual.”

At a meeting earlier in the day, Nemes said, Rabbi Zelig Rivkin, who heads Chabad of Louisiana, said every Temple and Synagogue in New Orleans “should look like Rosh Hashanah, should be packed” during the coming weekend, “to show that we persevere.”

Nemes said the service “is about coming together as one” as in New Orleans “we are a very unified community.”

Though there is unity, he said the attack was still an important reminder. “An attack on the Etz Chaim, Tree of Life Synagogue in Pittsburgh, is an attack not only on Shir Chadash, but on Gates of Prayer and Beth Israel and Chabad Center and all the other synagogues in New Orleans… we’re all in this together as one family.”

Jefferson Parish Sheriff Joe Lopinto referenced Rivkin’s call, saying that on a typical weekend, “millions of us went to services and we went home safely, but it wasn’t a news story.”

Lopinto said “we can’t let evil take that” away from congregations. “We have to make sure that we can come together as people and continue to worship.”

To that end, he said, “Next week I want every synagogue down this corridor to be packed. On behalf of me and the Jefferson Parish Sheriff’s Office and the men and women that I lead, we’ll be outside to protect you. You come on inside and do what you have to do. We’ll be here for you.”

Rabbi David Gerber from Gates of Prayer noted that Jews are “a stubborn people. We are no strangers to the fall, but we are masters of the rise.”

That is because “we’re commanded to find blessing in every single day,” even in days where one can’t find the blessing. “God tasks us to find goodness.”

Gerber said “we are in a dark time… (but) there are sparks of light, and it is for this light that we give thanks at this moment.”

He told the non-Jewish guests “we Jews have fallen before, but never have we had so many hands reaching to help us up. Blessed is the light within you.”

Jewish Federation of Greater New Orleans CEO Arnie Fielkow also spoke about the response in the greater community, “the expressions of unity and support coming from every corner to condemn the terrible acts of yesterday.”

Federation Board Chair Designate Joshua Force said the incident is a reminder of the importance of security. He said the Federation instituted a program several months ago to work on a security plan for area synagogues and Jewish agencies. Chaired by Aaron Ahlquist of the Anti-Defamation League and Irwin Lachoff, the committee is working with the Jewish Federations of North America’s Secure Communities Network “to identify and develop standardized practices to make our community safer, more resilient, better integrated and better informed.”

More information will be coming in the weeks ahead, he added.

Ahlquist, regional director of the ADL, said “we all have the right to feel safe when we are in our houses of worship. The act of prayer in a sacred place should not put one’s life at risk.”

Numerous political leaders also spoke, starting with U.S. Representative Steve Scalise, who was severely wounded last year as a gunman opened fire on a baseball practice for Republicans in Congress.

The Pittsburgh attack “was a clear display of anti-Semitism, of the bigotry that’s still out there and unfortunately still persists.”

But he continued, “What also persists, and what is more important, is in the face of that bigotry, this country shows unity. We come together.”

He concluded, “We’re not going to let the Jewish community be out there on an island by themselves.”

Many members of the New Orleans City Council spoke, led by Council President Jason Williams, who reached out to ZBT brothers around the country. “There was a lot of anger,” he said.

Councilman Joe Giarrusso, a member of Temple Sinai, said he is “tired of having to explain to my children why they are not safe.”

As a member of the local Jewish community and “here with all my brothers and sisters on the council… if there is one thing I am heartened by, (it) is the outreach of other faith leaders who stand together with us.”

Councilor Jarett Brossett spoke of the “strength in numbers” of those at the commemoration. “We will speak out every chance we get, because we will not let evil prevail.”

She said, “the local Catholic community actually has a prayer that we recite every Sunday — it’s our Family Prayer — and part of it says ‘Give us the perseverance to be a voice for life and human dignity’.

“By all of us coming together,” Moreno continued, “we are that persevering voice, calling for love, acceptance, peace, compassion and unity.  We all strongly stand with you and we will win.”

Councilman Jay Banks took a different angle, saying he was “sick and tired of having to come to these.

“This week it was a Jewish synagogue. It’s been an African Methodist Episcopal Church. It has been mosques. It has been far too many instances like this. The question is: ‘When will the adults in the room going to step up and say we’ve got to stop this’?”

Banks continued, “As long as we allow the gasoline of hatred to be poured on this fire, it is going to continue to blaze up… Hold the people accountable that have the ability to pump the brakes on this.”

Councilor Kristin Palmer said this is an era where words and actions can open doors to hatred. “Only us in this room, in this city and in this country, can close that door through our actions.”

In the middle of the service, Temple Sinai Cantor Joel Colman, Gates of Prayer Cantorial Soloist Tory May and Touro Synagogue Cantor Kevin Margolius led the crowd in “Heal Us Now,” a song May said was “very familiar for a lot of us in 2005” after Katrina.

The final line of the Kaddish, “Oseh Shalom,” a prayer for peace, was also the closing song, led by Colman, May and Margolious. After the conclusion, Silver invited everyone to bring a stone and place it on the steps of the bimah before filing out.