Over 2,000 stand with Pittsburgh in vigil outside Birmingham’s Beth-El 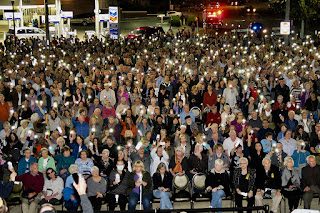 Birmingham has long been known as the Pittsburgh of the South, because of the city’s iron and steel manufacturing history.

A couple of days after a gunman opened fire at Tree of Life synagogue in Pittsburgh, a crowd of over 2000 assembled for an evening memorial outside Birmingham’s Temple Beth-El.

Rabbi Steven Slater of Beth-El welcomed “people of all faiths and people of none.” He said the Jewish community was “humbled by your support at this difficult time.” He thanked the first responders and police in Pittsburgh, as well as the Birmingham police for their support.

“Something broke this Shabbat,” Slater said. “A sacred trust was betrayed. The trust that here in America we respect people of other faiths, and their right to worship, was broken. And for that, all of us are lessened.”

But the gathering was “to restore that trust. To enact our sacred commitment to each other as fellow Americans who will stand together and face down hatred when it rears its foul head.”

Black ribbons were distributed to those in attendance, and it was explained that those are worn “when we lose people that we love.” The ribbons are used for k’riah, the act of tearing clothes while in mourning, but the crowd was asked to “merely pin it to symbolize the rending.”

Representatives from all sectors of the local Jewish community took part in the program, which was organized by all 10 local Jewish congregations and agencies, and Faith in Action Alabama.

Rabbi Moshe Rube of Knesseth Israel said “we cannot make sense of this horrific tragedy, and we should not try.” He spoke of Jewish teachings that compare each person to the world in its entirety, and 11 worlds were lost on Oct. 27. He urged the crowds to “build the world in the name of those who can not any more.”

Each act of kindness, Rube said, “helps build the world.”

He said, “storm the heavens with our prayers,” because “our brethren could not complete their prayer, so we must do it for them.”

“Today, we look to our fellow native Birminghamians and see the faces of love,” Rube said. “The faces that prove to the world that anyone who fuels hate, evil and murder will always be outnumbered by the unified forces of brotherhood, by those that recognize and appreciate the world contained in each human being and who are ready to take up the tools to raise what was made low.”

Many representatives from the local Christian and Muslim communities were attendance, as was U.S. Senator Doug Jones. Statements of support were sent by U.S. Senator Richard Shelby and Birmingham Mayor Randall Woodfin.

In Woodfin’s statement, which Slater read, Woodfin called it “one of the most heinous hate crimes in American history.”

He was taught that “our synagogues, our churches and mosques, are supposed to be among the safest spaces in our communities, places where people of faith come together to share fellowship, receive teaching and wisdom, find support and reassurance and practice peacefully one of the core freedoms that we as Americans are guaranteed.”

By continuing to congregate, “we will be expressing the depth of our belief in the ability of our nation to meet challenges, to overcome flaws, to carry on in the face of even the most incomprehensible of tragedies.”

Birmingham’s own history makes “our city especially attuned to the pain now reverberating through Pittsburgh,” as the 1963 bombing of 16th Street Baptist Church “brought Birmingham to grips with the horrors that can be wrought by the forces of fear and hatred. But it also delivered us unto the realization that the time for constructive engagement and positive change was nigh.”

“Birmingham’s Jewish community continues to have my full support, along with my heartfelt prayers and my undying admiration and appreciation,” Woodfin said.

Rev. J.R. Finney of Community Covenant Church, clergy leader for Faith in Action Alabama, spoke of Shalom, saying “I can’t help but think those 11 Jewish brothers and sisters who I’m sure greeted each other with “Shalom” on Saturday; and my hearts breaks knowing they never had the opportunity to say “Shalom” again to each other in parting.”

His shalom is also a commitment to “stand in solidarity with our Jewish community in prayer for our country, pleading ‘How long, Adonai, how long,’ must we wait until this evil stops, until we can respect each other’s personhood, differences, and worth?”

Jimmy Krell, who grew up in Pittsburgh, lit the 11 memorial candles as the names were read by Temple Emanu-El Cantor Jessica Roskin in the middle of the El Malei Rachamim memorial prayer.

Roskin also recited an English version of the Kaddish that has been written in response to gun violence. The Hebrew version was led by the clergy from the community’s four synagogues, and Cantor Michael Horwitz, chaplain at the University of Alabama at Birmingham Hospital.

Friedman discussed what each person can do in the aftermath of Pittsburgh, saying the late Lubavitcher Rebbe, Menachem Schneerson, taught of the importance to “turn hate and tears into positive action,” because then light always prevails.

“I look around tonight,” Friedman said, “and this is the America I prefer to see us as. This is who we are.”

He gave three ways to “add goodness and kindness to those around you that you know, and that you don’t know.”

A Charidy website has been set up, “respondwithlight,” to collect 1100 good deeds “in memory of the 11 souls that were taken away from us.”

He continued, “the world can’t be what it needs to be without you, so be the one to do the mitzvah.”

He also urged participation in that week’s national #ShowUpForShabbat effort, and encouraged Jews to put mezuzahs on their doors, “especially the front door, because this is America and we can.”

Sarah Metzger, music and youth director at Beth-El, led several songs throughout the program, including “Hashkiveinu: Let There Be Love,” “Olam Chesed Yibaneh, the World is Built on Love,” “Od Yavo Shalom, May Peace Come Upon Us,” “Oseh Shalom” and “We Won’t Back Down.”

After the final song, Slater said “let’s commit to coming together in new ways… I want us to dream together of a community that embraces everyone” — even those who are struggling with hate, “how can we draw them in?”

Slater referenced Rabbi Abraham Joshua Heschel, one of the greatest Jewish philosophers of the 20th century, who marched with Martin Luther King in Selma in 1965 and said “it felt like my feet were praying.” He urged the crowd to let their feet pray in a quiet march down Highland Avenue.

Holding their phones with the lights on, the crowd then walked down the block to Temple Emanu-El and gradually dispersed.