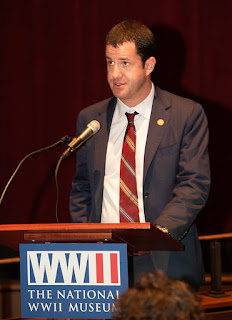 At the Oct. 25 launch of the Taube Family Holocaust Education Program at The National WWII Museum in New Orleans, Sean Taube of Taube Philanthropies discusses his father Tad Taube’s experience fleeing Poland as a child on the eve of WWII in 1939, and dedicating his life to supporting programs and institutions that advance Polish-Jewish history, life and culture. Photo courtesy of The National WWII Museum

The program will also support free public programming presented annually on Jan. 27, International Holocaust Remembrance Day, as well as distance learning programs that will allow students nationwide to explore individual and collective responsibility in the Holocaust.

“Many initiatives of Taube Philanthropies focus on World War II, the deep and powerful effects of which continue to influence world events,” said Tad Taube, founder-chairman of Taube Philanthropies. “The new Holocaust Education Program is critical as Americans are remembering less and less about the war and the lessons of the Holocaust.”

The program kicked off with an Oct. 25 symposium and screening of “Who Will Write Our History.”

The Museum’s WWII Media and Education Center offers Holocaust education to middle and high school students across the country, including through two distance learning programs – “The Holocaust: One Teen’s Story of Persecution and Survival” and “When They Came for Me: The Holocaust.” Taube Philanthropies’ gift will allow the Museum to expand its current program content, update technology needed to support online education and provide additional staffing resources.

The kickoff symposium, “What Do We Do When The Witnesses Are Gone,” started with a keynote address from Samuel Kassow of Trinity College. He wrote the 2007 book, “Who Will Write Our History? Rediscovering a Hidden Archive from the Warsaw Ghetto.”

A panel on contemporary issues in Holocaust studies was moderated by Daniel Greene of Northwestern University. Panelists included Sarah Cramsey of Tulane University, and Barbara Kirshenblatt-Gimblett of New York University.

The film, executive produced by Nancy Spielberg, is about the resistance organized by a band of journalists, scholars and community leaders after 450,000 Jews were sealed into the Warsaw Ghetto in November 1940. Led by historian Emanuel Ringelblum and known by the code name Oyneg Shabes, this clandestine group vowed to defeat Nazi lies and propaganda not with guns or fists but with pen and paper.

The group gathered thousands of testimonies about the fate of Polish Jews, sealing them in metal boxes and milk cans buried underneath the ghetto. The 35,000 pages are housed at the Jewish Historical Institute in Warsaw, and are available digitally at the U.S. Holocaust Memorial Museum’s archives.

“The Emanuel Ringelblum story underscores that people can resist not just with guns, but with pens and paper,” Kassow said. “The Germans wanted to obliterate the Jews and destroy the memory of who they were. Had this archive not happened or been found after the war, we would know nothing about the Jews as individuals; we would see them only from the German point of view as faceless victims, people without names.”

The documentary is the first time the story has been told in film. It mixes writings from the archive with rarely-seen footage, new interviews and dramatizations to show what the reality was in the ghetto. The film recently won the audience award for best documentary feature at the San Francisco Jewish Film Festival.

Kassow serves on the advisory committee for the new initiative. “A few decades ago, most studies of World War II focused on military and diplomatic history,” he said. “Now there is growing recognition that genocide and ethnic cleansing were major aspects of that war as well. The new educational program centered at this museum underscores how that war became the catalyst for crimes against civilian populations and targeted groups.”

“As the World War II generation passes away, The National WWII Museum has been entrusted to continue telling their stories to future generations — especially the important story of the Holocaust,” said Stephen J. Watson, president and CEO at The National WWII Museum. “The gift from Taube Philanthropies makes it possible for the Museum to expand its teachings about the atrocities of the Holocaust and why we should all stand together against genocide.”

“As The National World War II Museum focuses on American military, political and societal involvements in the second world war, it has a unique opportunity to explore the connections between the Holocaust and the American experience,” Taube said, “including such themes as American soldiers’ experiences liberating the death camps and encountering the survivors, the evolution of U.S. immigration policies toward welcoming Holocaust survivors, the history of life in the United States for newly resettled Holocaust survivors, the stories of American Jews alive today whose relatives suffered in the Holocaust, and finally, how we continue to preserve the memory of Holocaust atrocities, as survivors are no longer with us.”