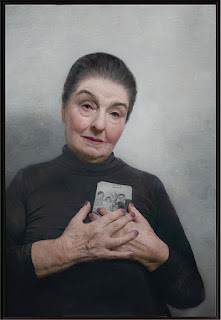 Artist David Kassan, who has a project that paints and documents survivors of the Holocaust, will be in residence at the University of Alabama at Birmingham from Nov. 12 to 16, when he will make a portrait of a Holocaust survivor, work with students and give a lecture.

He will also speak at Agudath Israel-Etz Ahayem in Montgomery on Nov. 17.

Kassan’s Birmingham visit is part of the biennial print atelier program of the College of Arts and Sciences’ Department of Art and Art History, which has partnered with the Birmingham Holocaust Education Center and Temple Beth-El for programming.

Kassan will work on the print of local Holocaust survivor Robert May through the week and give a lecture at Temple Beth-El at 6:30 p.m. on Nov. 15. His lecture will focus on the “EDUT” project and his work while artist-in-residence. A coffee and dessert reception will follow.

In Montgomery, there will be a reception at 5 p.m., followed by a lecture where he will discuss the project and how it was created to protect, promote and defend human rights.

Starting at 7 p.m., those in attendance can watch as he does a portrait of Holocaust survivor Sara Bronshtein, grandmother of Montgomery artist Elana Hagler.

The lectures in both communities are free and open to the public.

Edut is Hebrew for living witnesses, and the project, which the Little Rock native began in 2014, is a way of connecting with his grandfather’s traumatic history escaping ethnic cleansing on the Romania/Ukraine border to come to America in 1917.

The “EDUT” project’s mission is to meet with as many living survivors of the Shoah as possible and to document them in filmed video portraits and in paintings and drawings.

While many survivors have already told their stories on video or in memoirs, Kassan believes painting offers viewers a different kind of connection to the survivors.

Kassan is an internationally recognized contemporary American painter best known for his life-size representational paintings, which combine figurative subjects with symbolic textured abstract backgrounds. Kassan’s work is best classified as social documentary painting due to the importance and relevance of the subjects he chooses to represent.

The lectures will also commemorate the 80th anniversary of Kristallnacht, when Nazis in Germany torched synagogues, vandalized Jewish homes, schools and businesses, and killed close to 100 Jewish people.

The Birmingham lecture is funded in support by the UAB DAAH, the Jemison Visiting Professorship in the Humanities, BHEC and Temple Beth-El.

Partnering with Agudath Israel-Etz Ahayem for the Montgomery talk are the Alabama State University College of Visual and Performing Arts and The Department of Visual Arts, the Alabama Holocaust Commission, Jewish Federation of Central Alabama and Temple Beth Or.