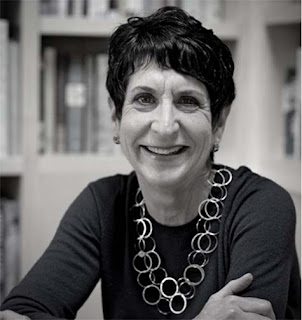 The idea that there is a story to be told in how food is a vital part of the Southern Jewish experience propelled Marcie Cohen Ferris to a career in food studies, leading to her recognition in October with the Southern Foodways Alliance’s Craig Claiborne Lifetime Achievement Award.

The award is presented “to an individual whom all thinking eaters should know, the sort of person who has made an indelible mark on our cuisine and culture, set national standards, and catalyzed important dialogues.”

Earlier this year, Ferris, a Blytheville, Ark., native, retired as American Studies professor at the University of North Carolina.

Ferris was the first project director for the Museum of the Southern Jewish Experience in Utica. The museum, which was housed at the Henry S. Jacobs Camp until 2012, will reopen in New Orleans in 2020.

According to a release from the Alliance, Ferris did “transformative” work at the museum, “published genre-defining books, framed public dialogues about food and identity, and helped pioneer the food studies discipline.”

In the tribute video, “Marcie Cohen Ferris Does The Work,” she describes food as always being “always my lens on place and identity that went with me from when I was a little girl.”

Blytheville was “a deeply Southern space to grow up in,” with her Jewish world and the non-Jewish world. “A big part of my identity was the boundaries between Jewish foods and Southern foods and the foods of Northeastern Arkansas,” she said.

She cooked alongside her mother, especially on holidays. When she went to college in Rhode Island, it was “kind of a shock. I did look for Southerners… and felt like a fish out of water.” She made her traditional Shabbat dinner of fried chicken in her apartment “for my friends, and they loved it.”

When she took a class on folklore, she asked if it would be permitted for her paper to be about “something Southern and Jewish.” Before long, she got a call from Jackson asking if she would be interested “in this project,” the Museum of the Southern Jewish Experience. “It felt like home,” she said, and “I saw the complexity of Mississippi.”

That led to her being recruited by the University of North Carolina and the publication of her first book in 2005, “Matzoh Ball Gumbo: Culinary Tales of the Jewish South,” which was nominated for a James Beard Foundation award.

Much of the material came from a Southern Jewish Foodways survey she sent out throughout the region in 1998, and dozens of interviews.

She is also co-editor of the 2006 collection, “Jewish Roots in Southern Soil: A New History,” and the 2014 book “The Edible South: The Power of Food and the Making of an American Region.”

From 2006 to 2008 Ferris was president of the Southern Foodways Alliance, growing it into a national organization.

“Marcie is a tireless advocate and cheerleader for her students,” Sara Camp Milam, SFA managing editor, said when presenting the award. “She has encouraged scores of emerging scholars — most of them women, and myself included — to reach further than we thought we could. She has made us her peers.”

Milam spoke of returning to Chapel Hill last June for a surprise retirement party for Ferris, a gathering of “Marcie’s Girl Gang,” which was described as “a gang to be reckoned with, and Marcie is at its center.”