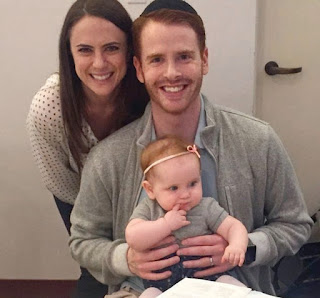 Congregational President Al Cohn announced on Nov. 20 that the search committee “whole-heartedly recommended” Rabbi Adam Wright, and the Board of Directors unanimously agreed.

Wright is associate rabbi at Temple Solel, a 700-member congregation in Cardiff-by-the Sea, Calif., in the San Diego area. He has served there since he was ordained at the Los Angeles campus of Hebrew Union College-Jewish Institute of Religion in 2014.

Wright visited the congregation the weekend of Oct. 19, and felt “this is home.”

A native of West Bloomfield, Mich., Wright graduated from Wheaton College with a degree in religion and Judaic studies. He pursued graduate studies at Vanderbilt University Divinity School, earning a Master’s in Theological Studies.

Growing up in the Midwest, there was an emphasis on “family, faith and a sense of belonging” that is also prevalent in the South. While at Vanderbilt, he worked with Lynda Gutcheon, long-time educator at The Temple in Nashville. “She exposed me to Southern Jewish life that I’d never really seen before,” he said.

He enrolled at HUC-JIR to start his rabbinic training, and served several congregations in California.

He and his wife, Rachel, a pediatrician, wanted to find a community where faith and social action matter, and which has an academic and intellectual tradition.

When he saw the opening at Emanu-El, “I jumped in.” He knew about the congregation through a consulting firm that worked with former Emanu-El Rabbi Jonathan Miller during the congregation’s renovations.

He also had been to the area before. At Temple Solel, he created the Hartman Leadership Program for grades 11 and 12, which includes a civil rights tour to Alabama, Selma, Birmingham and Montgomery. Another trip to Little Rock and Memphis is forthcoming.

“It’s fun to take a lot of Southern California Jewish teens” and show them other regions of the country, he said.

When he and his wife visited in October, “within a matter of minutes, we realized we were in the right place… we absolutely fell in love with it.”

He cited the history from Samuel Ullman to Rabbi Grafman, to the current long tenure of Cantor Jessica Roskin, as showing Emanu-El as “a place where people want to belong.”

“I felt this was something I wanted to be part of,” he said.

In California, he developed advanced studies lectures, many with an interfaith angle. He also has been a strong advocate for Israel, including serving on the advisory committee for Stand With Us.

The Wrights will be in Birmingham for a “meet and greet” Chanukah event on Dec. 6, Shabbat services and a dinner on Dec. 7, and additional programs to be announced. The congregation will meet on Dec. 9.

Emanu-El is the largest Jewish congregation in Alabama. Wright will succeed Rabbi Emeritus Jonathan Miller, who retired in 2017.