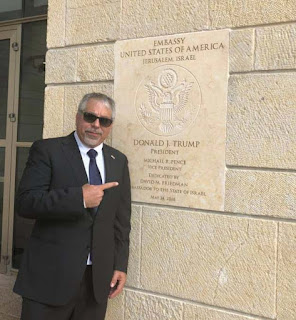 Israeli Consul General Lior Haiat from the Miami Consulate, at the U.S. Embassy in Jerusalem, while accompanying Mississippi Governor Phil Bryant on a trade mission to Israel in mid-November.

Against a backdrop of the people of Israel facing an onslaught of deadly rockets, fired by Iranian-backed Palestinian terrorists from the Gaza Strip, the Alabama Baptist State Convention adopted a resolution to “affirm and celebrate” President Trump’s decision last May to move the U.S. Embassy from Tel Aviv to Jerusalem and recognize Jerusalem as Israel’s capital.

“The messengers to the Alabama Baptist State Convention meeting in Trussville, Alabama, November 13-14, 2018, do affirm and celebrate the relocation of the US Embassy to Jerusalem,” stated the resolution, which passed overwhelmingly. Trump’s action, which many considered long overdue by the U.S., was seen as an important affirmation of support for Israel.

“In 1995, Congress passed the U.S. Jerusalem Embassy Act with overwhelming bipartisan support, encoding in federal law the recognition of Jerusalem as Israel’s capital and requiring the move of the U.S. Embassy to Jerusalem,” the resolution noted.

Presidents Bill Clinton, George W. Bush and Barack Obama, despite suggesting that they would move the embassy, repeatedly deferred implementation, maintaining that such a move and recognition of Jerusalem as Israel’s capital would complicate Middle East peacemaking.

Trump, on the other hand, saw the move as potentially fostering Israeli-Palestinian negotiations by taking this issue “off the table.” The Trump decision does not preclude negotiations between the Israelis and Palestinians to determine the final status of Jerusalem.

Rev. Jim Cooley, chairman of the resolutions committee, pastor of First Baptist Church of Birmingham and moderator of the Birmingham Baptist Convention, told al.com that the resolution reflected “a sympathy for the nation of Israel that has been pervasive, an appreciation for the historic nature of Israel and support for them. They are the democracy in the Middle East. There is a recognition that our faith has sprung from there.”

The resolution also noted that “the nation of Israel, reborn in 1948, has historically claimed Jerusalem as its capital” and stated, “Judaism, the official religious faith of Israel, recognizes Jerusalem as the center of life for the Jewish people.”

The Baptist measure also praised Israel’s record of respecting other faiths. “Israel is an established Jewish state that protects not only the holy sites of Jews but also those of Christians and of Muslims within its borders,” it noted, adding that under Israeli administration “Jews, Christians and Muslims all freely gather for worship in the city of Jerusalem.”

The Alabama Baptist State Convention is comprised of delegates from Southern Baptist churches throughout the state. It is estimated that there are more than a million Southern Baptists in Alabama, making it the state’s largest denomination.

In many Protestant denominations to the left, Palestinian activism has made Israel a controversial topic, but one observer said the Israel resolution at the Baptist convention was supported “98 percent.”

One of the main proponents of the resolution was Rev. John Killian of Fayette, a past president of the Alabama Baptist State Convention who has visited Israel multiple times. Killian has been at the forefront of building ties with the Jewish community of Alabama, advocating for Israel and speaking out against anti-Semitism.