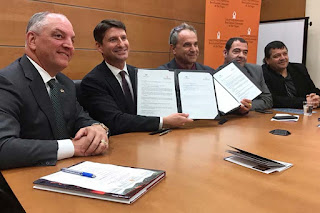 Louisiana Governor John Bel Edwards at signing of collaboration agreement between the Water Institute of the Gulf in Baton Rouge and Israel’s Zuckerberg Institute for Water Research, at Ben Gurion University on Oct. 29.

At the end of October, Louisiana Governor John Bel Edwards spent a busy week in Israel, leading a trade mission that included meetings with companies in a range of industries, visiting government officials and seeing holy sites.

“I am honored to represent the State of Louisiana on this historic visit to Israel,” Edwards said. “Our country and our state share much with the people of Israel – in matters of faith and culture, as well as commerce.”

He explained, “this is an economic development mission, where we will look to strengthen ties with Israel in several key sectors.”

In May, Edwards hosted a celebration of Israel’s 70th birthday at the governor’s mansion in Baton Rouge, and signed an executive order barring the state from signing contracts with firms that engage in anti-Israel boycotts. During the ceremony, Gilad Katz, the consul general of Israel to the Southwest United States, invited Edwards to visit Israel.

Among the state officials on the trip were Commissioner of Administration Jay Dardenne and Louisiana Economic Development Secretary Don Pierson.

Edwards met with Prime Minister Benjamin Netanyahu to discuss Louisiana’s strong relationship with Israel, as well as trade and economic development issues of mutual importance to Israel, the United States and Louisiana.

“This long-awaited meeting is the result of many years of friendship and partnership… I was proud to share with Prime Minister Netanyahu that Louisiana stands with Israel, and we will always remain faithful to our staunch ally in the Middle East,” Edwards said.

The mission’s first day was Oct. 28, starting with an early morning Mass at the Church of the Holy Sepulchre, which is said to be the site of Jesus’ crucifixion and tomb.

At Yad Vashem, Israel’s national Holocaust memorial, Edwards and First Lady Donna Edwards laid a wreath at the main memorial room. While there, they also offered prayers for the previous day’s victims at Tree of Life in Pittsburgh. “Words are hard to come by,” he said, “but as a country, we must commit to be better.”

They also visited the Western Wall and the Temple Mount. As is traditional, Dardenne placed a note in the Wall. He said it was an “emotional time” as his brother died in June, and his nephew died a week before the trip.

State officials received a briefing at a Ministry of Foreign Affairs luncheon. They also met with Israeli Minister of Energy Yuval Steinitz and with officials of Start-Up Nation Central, an innovation partnership that has supported such entrepreneurial companies as Vayavision, a provider of software systems for self-driving vehicles, and Skyline Robotics, which is developing automated window-cleaning systems for skyscrapers.

With recent large natural gas discoveries in Israel, energy was a key component of the trip. “Louisiana is an energy state and a global leader in oil and gas exploration and production,” Edwards said. “We have a long-established track record of exporting our technology and expertise to international oil and gas markets. We are encouraged that there could be opportunities based in Israel for Louisiana companies, and companies with ties to Louisiana, to find opportunities there to invest, generate new revenue and create good jobs through growth.”

They met with Bini Zimer, manager of Israeli operations for Houston-based Noble Energy, which has extensive operations off Israel’s coast in the Mediterranean. They also met with Yossi Abu, CEO of Delek Drilling.

Pierson said Noble and Delek “are leading the way in offshore exploration and production in Israel, and we are exploring what role Louisiana companies might play in that region. Today’s discussions were an encouraging start to what we hope will lead to meaningful partnerships in the energy sector between Louisiana and Israel.”

Dardenne noted that Louisiana has more offshore drilling experience than anyone, with widespread exploration in the Gulf of Mexico.

The group also met with officials of Delek US, which has an oil refinery in Krotz Springs. They discussed the possibility of future growth for the plant, which currently has a capacity of 74,000 barrels per day.

Another focus of the trip was water management, which at first would seem odd, as Louisiana has “too much” water and Israel has a dry climate.

At Ben Gurion University on Oct. 29, the Baton Rouge-based Water Institute of the Gulf and the Israel-based Zuckerberg Institute for Water Research signed a five-year Memorandum of Understanding for collaboration on groundwater research, applications to improve farming, better utilization of drinking water aquifers, surface water and stream research, and other fields that support and enhance human life.

Water Institute President and CEO Justin Ehrenwerth said “the lessons Louisiana and Israel have learned through our respective decades of pioneering water research represent a strong foundation for working together to address future challenges.”

Edwards said “both of these institutes conduct water management research all over the world, and both can bring their scientists and research together to solve our biggest challenges related to water.”

Louisiana’s Coastal Protection and Restoration Authority manages a $50 billion Coastal Master Plan that is generating private sector growth in water management as the state implements coastal preservation solutions for decades to come. The Authority, Water Institute and the LSU Center for River Studies are housed on the 35-acre Water Campus in Baton Rouge, where up to 4,000 employees eventually are expected to work. Over the next generation, as many as 45,000 direct and indirect jobs could result from Louisiana’s growing water management sector.

Adding to the fortuitous timing of the trip, Edwards is co-chair of the National Governors Association’s Resource Center for State Cyber-Security. The NGA national cyber-security conference will be held in Shreveport in May, and it is expected many of the companies the delegation met with will take part.

One of the delegation’s final visits was with Twistlock co-founder and Vice President of Research and Development Dima Stopel, Vice President of Finance Pini Karuchi and Chief Technology Officer John Morello from Baton Rouge.

The company, which opened an office at the LSU Innovation Park in April, provides automated and scalable cyber-security platforms for cloud-based computing systems. The Baton Rouge location has eight Louisiana employees, with plans to expand to 12 by January.

There were meetings with several other cyber-security companies, and a visit to the CyberSpark Industry Initiative in Beersheva.

Israel Innovation Authority chief scientist Ami Appelbaum told Edwards “It’s not every day we have a governor from any U.S. state coming here… We don’t take it for granted that you are coming here. We take it as a big compliment but also a big responsibility.”

In 2017, 16 percent of all global investment in cyber-security ventures went to Israeli companies, second only to the U.S.

During their meeting, Netanyahu and Edwards discussed partnerships between Israel and Louisiana in cyber-security, including the National Cyber Research Park in Bossier City, Louisiana Tech University’s research leadership on the I-20 Cyber Corridor, and LSU’s Stephenson National Center for Security Research and the Transformational Technologies and Cyber Research Center.

On Oct. 30, the delegation visited the Golan Heights, where they could see into Syria. Edwards commented that the area they saw from a distance had been held by rebels, ISIS and the Assad regime over the course of just a few months.

Israel’s role in providing humanitarian aid to Syria civilians was discussed, as Syrians are brought into Israel for medical treatment clandestinely, as they have been taught hostility and hatred toward Israel from an early age.

The role of Friend Ships Unlimited in providing humanitarian aid to Syrians was highlighted, as the faith-based volunteer group is based in Lake Charles.

Capitol invasion conjures up dark memories for Jews throughout the region