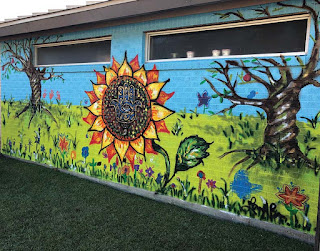 But this time, it’s all good.

Considering the graffiti “a domestic terror attack,” Metairie artist Laurie Alan Browne approached the congregation with the idea of painting a mural where the graffiti, which had been removed by a local businessman a day after it was discovered, had been.

Browne grew in Greenville, Miss., where her family was close friends with the Steins.

“I have Jewish friends,” she explained, and the graffiti “made me feel it was a low blow… I, as an individual citizen of Louisiana, did not feel it was warranted or justified in any capacity.”

The Jewish community belongs in Northshore, she said, but anti-Semitism doesn’t.

Browne designed a mural with a sunflower as the centerpiece, with trees and a garden nearby. One of her Jewish friends suggested a hamsa, a protective hand of God amulet in Middle Eastern folklore, as the center of the flower. ““I like the idea of a protective symbol,” she said. She also placed a Star of David in the middle of the pupil of the eye.

The mural shows “this is a community that needs to be protected.”

She laid the base layers on Oct. 22, then continued work on Oct. 29 and 30. On Nov. 11, the religious school students drew the flowers and leaves along the bottom of the mural.

A mixed media artist, Browne has exhibited at the Ogden Museum in New Orleans, and in galleries in several states. This was her first work made entirely from spray paint.

Though she has drawn attention for her artistic endeavor, she does not want it to be about her, but about the congregation and their efforts to raise funds to enhance security. She has been promoting the congregation’s GoFundMe page and also urging people to contribute directly to the congregation’s security needs through their website. “We’re fortunate that we’re living in a time when it is easy to do that.”

Before the project, she did not know anyone in the Northshore congregation, “but now I do, which is wonderful.”