AEIVA Exhibit: Fashion designer lost in the Holocaust lives on through her sketches 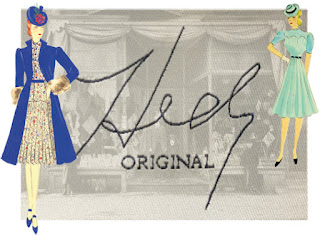 While many Jewish fashion designers have become household names, like Isaac Mizrahi and Michael Kors, the Abroms-Engel Institute for the Visual Arts at the University of Alabama at Birmingham will host an exhibit about a designer who never got that chance, because she was murdered in the Holocaust.

“Stitching History From the Holocaust” features the sketches of Hedy Strnad, along with garments that were inspired by her drawings. It will be displayed from Jan. 7 to March 16, with an opening reception on Jan. 11 at 6 p.m.

A talented dressmaker in Prague in the 1930s, Strnad was not able to escape Nazi-occupied Czechoslovakia. However, some of her fashion designs did. The exhibit was created by the Jewish Museum Milwaukee, which is loaning it to the Birmingham institute.

The Birmingham Holocaust Education Center is partnering with UAB, the University of Alabama, AEIVA, UAB’s Alys Stephens Performing Arts Center, Birmingham Jewish Foundation and Red Mountain Theatre Company to present programming, including gallery talks, a fashion show of Strnad’s designs, and a play in conjunction with the exhibit. Docent-led tours will be available.

In March 1939, Hitler’s army invaded Czechoslovakia. In December, Hedy’s husband, Paul, wrote to his cousin in Milwaukee asking for help in acquiring visas for himself and his wife to emigrate to the United States. “You may imagine we have a great interest of leaving Europe as soon as possible,” Paul wrote. He included eight samples of Hedy’s dress designs to make the case that she would be employable in the American apparel industry.

The cousin’s efforts to help them emigrate were unsuccessful.

For decades, the letters and sketches were stored away in a box in the cousin’s attic, where they were discovered in 1997. They were donated to Jewish Museum Milwaukee, which teamed with the costume shop at Milwaukee Repertory Theater to turn the sketches into garments. “Stitching History from the Holocaust” is a detailed personal and historical exhibit built around the Strnads’ story, their life in Prague in the 1930s and Hedy’s garments, which are displayed on mannequins.

“The stories of the Holocaust are stories of loss,” said Deborah Layman, BHEC president. “Hedy’s story represents the loss of a talented woman whose creative life was cut short. Her story is one of the millions of heartbreaking Holocaust stories that we tell and re-tell as a reminder of the consequences of hate.”

On Jan. 22 at 6 p.m., there will be a Gallery Talk, “European Jewish Fashions in the 30s and 40s: How the Jewish Fashion Industry Was Extinguished by the Nazis and Struggled to Return to Prominence After the War,” with Kristen Miller Zohn, executive director of the Costume Society of America.

On Feb. 5 at noon, Jonathan Wiesen, incoming chair of the UAB Department of History, will speak on “The Holocaust in Czechoslovakia.”

“A Stitch in Time” will be performed by the Red Mountain Theatre Company on Feb. 17 at 2 and 4 p.m. The one-act play by Susan Westfall is based on Strnad’s story.

On March 5 at 6 p.m., University of Alabama Professor Janek Wasserman will speak about “Immigration Then and Now.”